Nadeshiko Japan starts off the year with a 7-0 victory 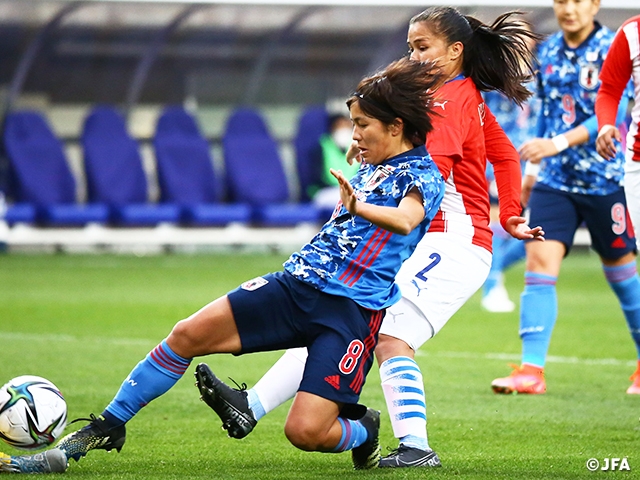 On Thursday 8 April, the Nadeshiko Japan (Japan Women’s National Team) played in an international friendly match against the Paraguay Women's National Team at Yurtec Stadium Sendai, where the team won with a final score of 7-0.

Japan took the initiative from the early minutes, as they penetrated the flanks to threaten the Paraguayan goal. The opening goal came in the sixth minute, when SUGITA Hina (INAC Kobe Leonessa) delivered a cross from the right side. After Iwabuchi went up to fight for the ball, MINAMI Moeka (Mitsubishi Heavy Industries Urawa Reds Ladies) responded to the loose ball and fired a shot into the net, scoring her first goal at the senior category.

Sugita came close to scoring the team’s second goal in the 14th minute with a well struck shot, but her attempt was denied by the post. The second goal came in the 26th minute, when MIURA Narumi (Nippon TV Tokyo Verdy Beleza) assisted the goal of Iwabuchi. 10 minutes later, Iwabuchi connected with a FK delivered by Nakajima from the right side, which induced a own goal to make it 3-0.

The Nadeshiko Japan continued to showcase their dominance in the second half, as Miura assisted another goal in the 52nd minute, this time setting up the goal of SUGASAWA Yuika (Mitsubishi Heavy Industries Urawa Reds Ladies) to make it 4-0. Paraguay came close to threatening the Japanese goal in the 60th minute, but the attempt was saved by IKEDA Sakiko (Mitsubishi Heavy Industries Urawa Reds Ladies). TAKARADA Saori (Washington Spirit) also showed her effectiveness in the centre back position, as she covered wide range in defence to deny the opponents from creating chances. Takarada also contributed to her team’s offence, as she assisted Iwabuchi’s second goal of the match, extending the team’s lead to 5-0.

Players who entered the match as second half substitutes also shined in this match, as MOMIKI Yuka (OL Reign), HAMADA Haruka (Mynavi Sendai Ladies), TANAKA Mina (Bayer Leverkusen), and KINOSHITA Momoka (Nippon TV Tokyo Verdy Beleza) all showcased strong performances to excite the crowd. With Momiki and Tanaka scoring a goal apiece in additional time, the Nadeshiko Japan won their first match of the year in a dominating fashion.

TAKAKURA Asako, Coach of Nadeshiko Japan (Japan Women’s National Team)
First of all, I am glad that we were able to hold this match, so I am thankful to all the people who made it possible. I feel like we were able to take the initiative and showcase a collective effort in defence throughout the entire match. However, considering how many chances we created, we did not score as many goals, so that is an aspect we must improve on. I will continue to communicate with my players so that we can raise the overall level of this team.

DF #22 TAKARADA Saori (Washington Spirit)
With the team taking control of the match form the early minutes, I focused on keeping our defence light, but I was too indecisive with the ball, and couldn’t create a positive rhythm from the defence line. However, our attackers told me during halftime that they wanted more long balls, which led to the goal I assisted in the second half, so that was good. With the Olympics having a smaller roster size, I think being able to play multiple positions can be a huge advantage, so I will continue to raise the quality of my plays. 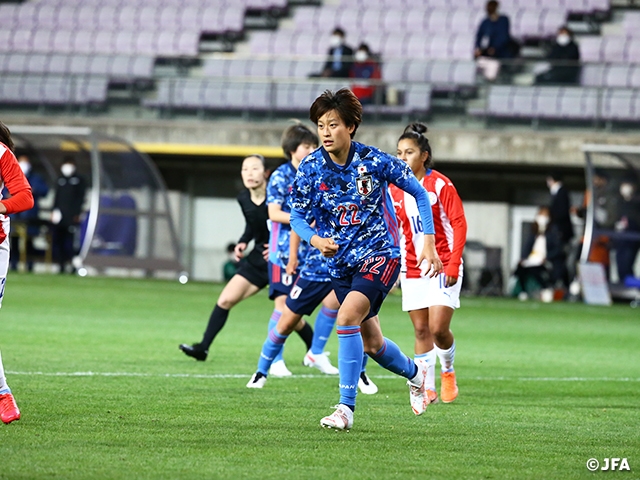 MF #6 SUGITA Hina (INAC Kobe Leonessa)
Paraguay did not come out applying pressure from their front line, so we were able to receive the ball in open space. I played in the same team with SAMESHIMA (Aya) until last season, so I knew how she played, and we were able to combine well in the flank. We have been working on the details and I feel like that has translated into today’s score. However, we did miss quite a few opportunities as well, so we still have plenty of room for improvements. 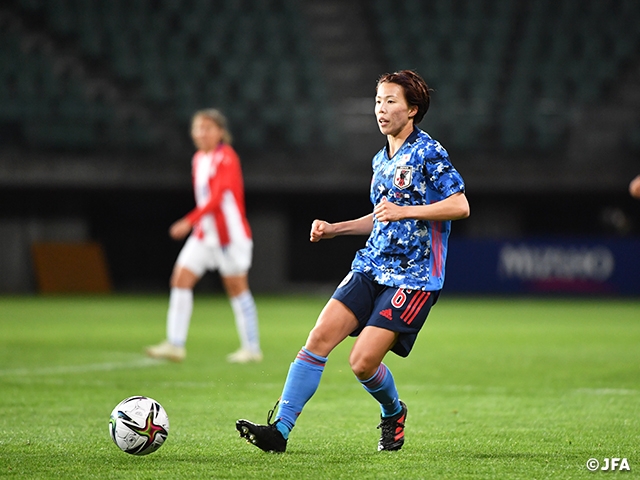 MF #7 NAKAJIMA Emi (INAC Kobe Leonessa)
Although we dominated the match, we lacked creativity upfront, so that is an aspect we need to improve on. We have been communicating with each other on what we need to work on, so we will do our best to make the adjustments ahead of our match against Panama. We also made quite a few mistakes, so that is another aspect we need to work on. We could have changed the sides more frequently, but overall, our attackers made plenty of contributions to help the defence and we were able to win lots of fifty-fifty balls, so we hope to build on those positives as well. 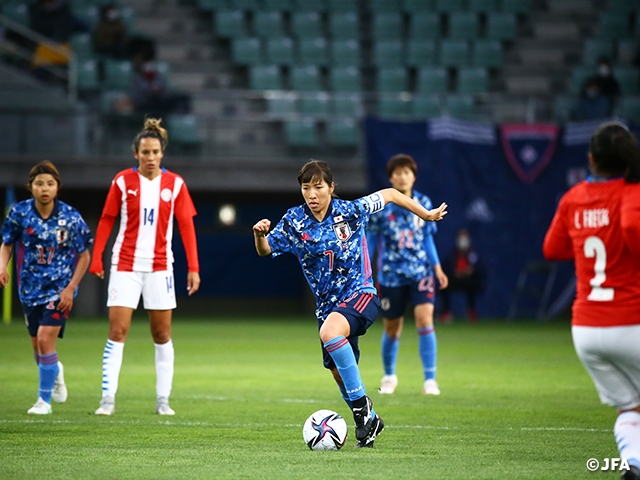 MF #25 KINOSHITA Momoka (Nippon TV Tokyo Verdy Beleza)
I was fully prepared for this match, so I wasn’t that nervous when I entered the match. I was able to showcase my passing ability, but I need to be more involved in our defence. Now that I have made my debut with the national team, I am more inclined to be a part of the Nadeshiko Japan and participate in the Olympics. We still have another match, this time played at Japan National Stadium, so I will try to earn as many minutes as possible and showcase a performance that can leave a strong impression. 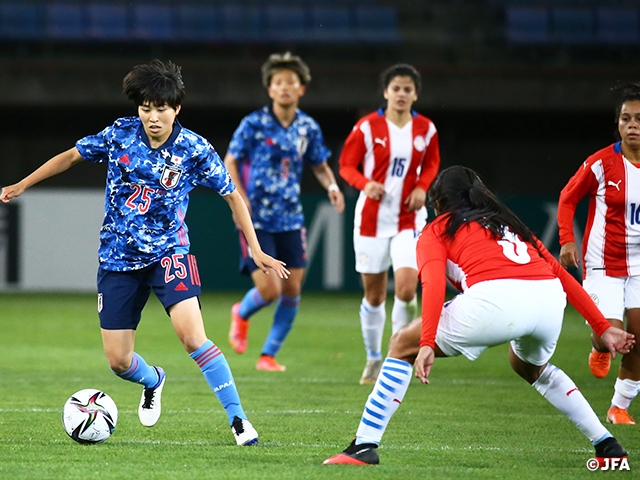 FW #8 IWABUCHI Mana (Aston Villa)
It was great that we won the match, but we still need to improve the overall level of our passes and finishing skills. But even so, it was great that we managed to score seven goals. I tried to be as distractive as possible for the opposing defenders. Our ability to change positions fluently is one of our lifelines, so we must heighten the quality of it, and be able to change positions even against stronger opponents.