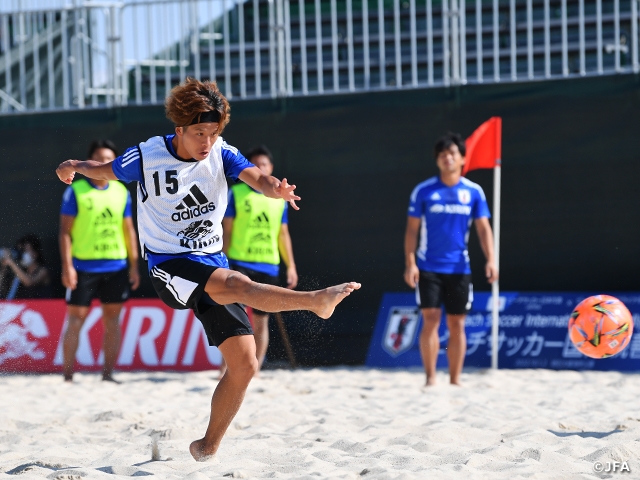 The Japan Beach Soccer National Team are scheduled to play against Ukraine in a set of international friendly matches on Saturday 1 and Sunday 2 October at Okura Beach Park in Hyogo. For Japan, who finished second at the FIFA Beach Soccer World Cup Russia 2021™, this will be their first international match held in Japan in three years, while these marches will serve as an important training match ahead of next year’s AFC Beach Soccer Asian Cup, which will be held in Thailand.

One day before the friendly, Japan trained at the match venue for about an hour to work up a sweat. Tensions were building as player-coach MOREIRA Ozu (Tokyo Verdy BS) gave directions with a strict tone. The team was also seen working on their set-pieces as they prepared for the pair of matches to be played in the weekend.

The squad selected for these friendlies includes both the veterans who played in the last World Cup and the youngsters who took part in the team’s recent trip to Spain. Ahead of their first match to be held on Saturday, Moreira commented, “Since the tournament in Spain, we have brought in a lot of young players, and we want to continue in this direction. Of course, we want to get good results as well, so I hope we can have good matches while trying out the young players.” 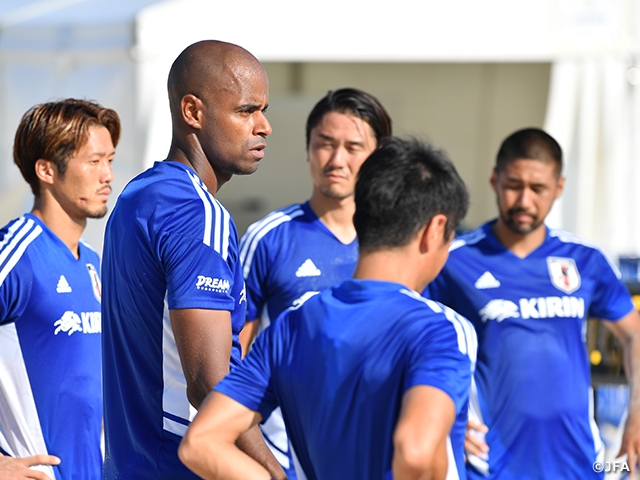 Both matches played on Saturday and Sunday will kick-off at 14:00. Admission for these matches are free and they will also be streamed live on JFA’s official YouTube channel, “JFA TV.”

GK #1 KAWAI Yusuke (Tokyo Verdy BS)
Our time with the national team is limited, so it is important that we do our best to get on the same page with each other. I think we can compete well enough, as long as we continue to communicate and execute our gameplan as a team. Coach Moreira has been demanding the goalkeepers to actively take shots, while assistant coach TABATA Teruki has instructed that each of the three goalkeepers must score a goal. Although I haven’t scored many goals in the past, the two goals I scored in the final of the Japan Beach Soccer Tournament were the embodiment of what I have been building up in my recent trainings. Through these friendly matches, we hope to convey the joy and excitement of Japanese beach football to the people who are unfamiliar with the sport.

FP #7 OBA Takaaki (Loewe Yokohama)
This year I was given the opportunity to play in Spain to gain more international experience. The opportunity to play with and against foreign players on a daily basis was an invaluable experience for me. With that being said, playing for the national team is always something very special for me, and that feeling has not changed, so I am just focused on winning matches. I'm still not sure how I can give back my experience, but I just have to prepare 100% for the game in front of me and do my best on the pitch.

Mykola KOSTENKO, Head Coach (Ukraine Beach Soccer National Team)
With the team scheduled to participate in next year’s World Beach Games and an upcoming tournament in Poland, I feel like we have achieved some of our goals. I am grateful for all the support provided by the JFA for these matches, as it gives a lot of mental support to the players and also to the country of Ukraine. It is a great honour to play against one of the strongest countries in the world, Japan, who came second in the World Cup, and it is an important step in our preparation for next year, which is expected to be an intense season.

FP #6 Andrii BORSUK (Ukraine Beach Soccer National Team/BSC Artur Music)
First of all, I would like to thank the JFA for all the support they have given us to strengthen the Ukraine National Team. We are grateful for their warm hospitality since we arrived in Japan. We were lucky to win our previous match against Japan. 11 years have passed since then and I think both sides have moved on and evolved dramatically over those time. Japan is a strong team who finished second in last year’s World Cup. As a player I am looking forward to the match and I hope that everyone watching will also enjoy it. 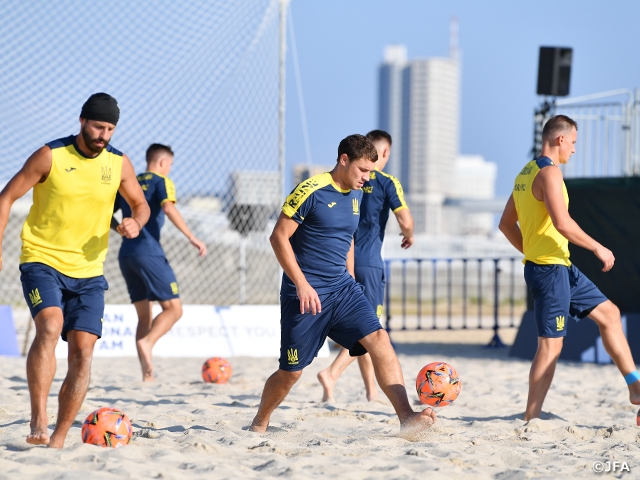