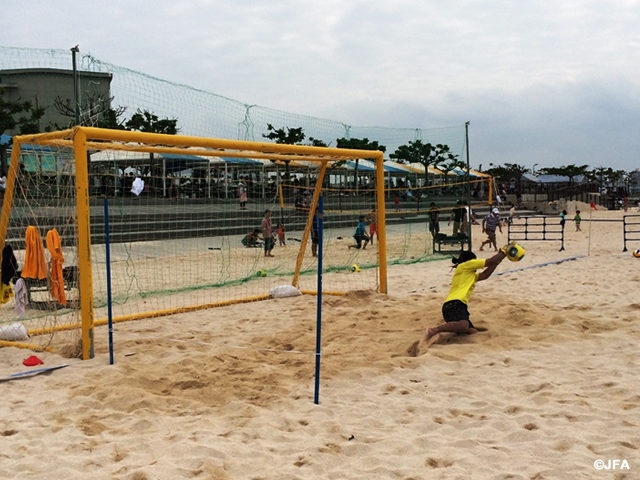 18 players looking to seal a place on the Beach Soccer Japan National Team have started training in Okinawa. It is the second training camp since Marcelo Mendes became the team coach. Four players, who were scouted by Mendes in beach soccer clinics across the country, are participating for the first time in this camp.

Although it is the beginning of the rainy season in Okinawa, the team held a technical training session following warm-up exercises under a clear sky. It is vital to control or pass the ball precisely using not only feet but also heads or chests. Mendes requested accurate passes of differing strengths.

The three goalkeepers held a different training session. Nakagawa, the goalkeeping coach, gave instructions in detail on positions for receiving the ball, the kicking motion before jumping and the direction of the ball.

In the latter half, they held a practice game. The team settled on their offensive style starting from the keeper position to the goal. Gradually the players became more vocal. - ‘Support should come closer’ or ‘Boost speed when a pivot’s got the ball.’

Competition has increased among the team, because new players have been added to the experienced ones under the new coach. Beach Soccer Japan National Team expects better results. The training camp will continue until the morning of 20 May. 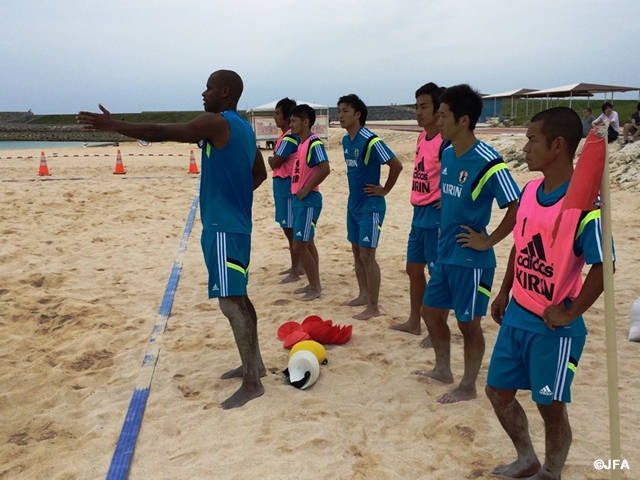 GINOZA Tomoya（TOKYO LEQUIOS BS）
It is the second training camp since Marcelo was named as our coach and we learned a lot about tactics just like in the previous camp. It’s very competitive, as there are some new players. Personally, I enjoy having this chance to improve and learn new things about beach soccer. I will keep pushing myself during training, focusing on every single opportunity, so that I understand and play as the coach wants us to. Also I’m really pleased that we have the goalkeeper coach this time and that he can instruct us in detail. I’ll enjoy learning a lot more at the rest of the camp.

SHIBUTANI Ryuichi（SHONAN SPREAD1545）
Although it was my first opportunity to participate in the practice with other candidates for the national team, I enjoyed the competitive atmosphere very much. Every candidate has the basic skills or power, of course. It is crucial to understand and use new tactics given to us by Coach Mendes, such as positioning or off-the-ball movement. And then we need to prove our individual abilities to survive in this team. It’s very tough, but I’ll give it my best shot, really pushing myself, and hope that gives our team good energy as well. The camp has just started, but I will do my best throughout the practice sessions, communicating with players as much as I can.

UEHARA Tomoya（SOL MAR PRAIA）
It is the second training camp since Marcelo became our coach. There are some new players and we had a first-day practice session in a bit of a tense atmosphere. I have relearned the importance of basic skills, thanks to the fact that in the training the coach laid weight on the essentials of beach soccer, such as passing the floating ball or juggling the ball. I think it’s vital for the team as well. I will take conscious effort during the training so that I will be selected for the national team.
As for team tactics, it has improved since the previous camp. So I have to understand the movement first, and play thinking about what’s around me.
If all of us understand the coach’s tactics and are able to play in that way, we can be the best in the world.
During the rest of the camp I will keep trying to understand the tactics more and use them as much as I can, not wasting any time including free time. 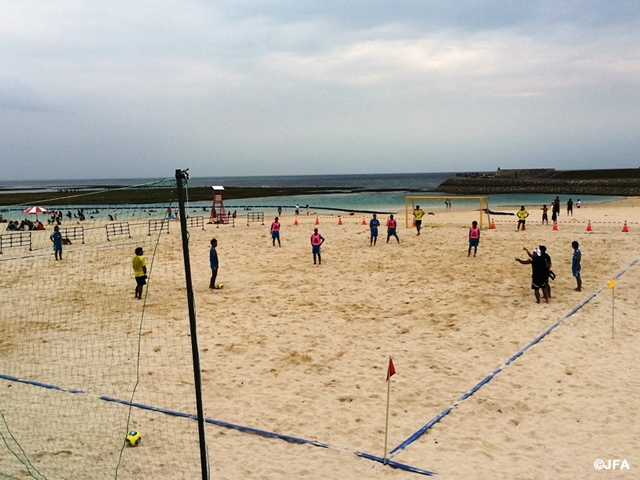