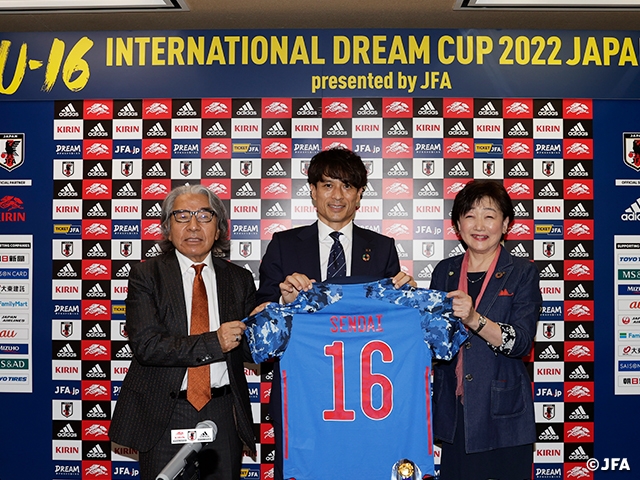 On Monday 23 May, a press conference was held at Sendai City Hall to mark the opening of the U-16 International Dream Cup 2022 JAPAN presented by JFA. The tournament will be held at Yurtec Stadium Sendai from Wednesday 8 to Sunday 12 June.

Ahead of the tournament, JFA Executive MIYAMOTO Tsuneyasu commented, “There was a tournament called the Sendai Cup in the past, which also produced players who supported the national team some time ago, and this International Dream Cup has also been held in Sendai on three occasions. Talking to the mayor and coming to Vegalta Sendai matches, I feel that football is firmly rooted in this region. I hope that this will give the young players an opportunity to be seen by many people and to develop as a player.” 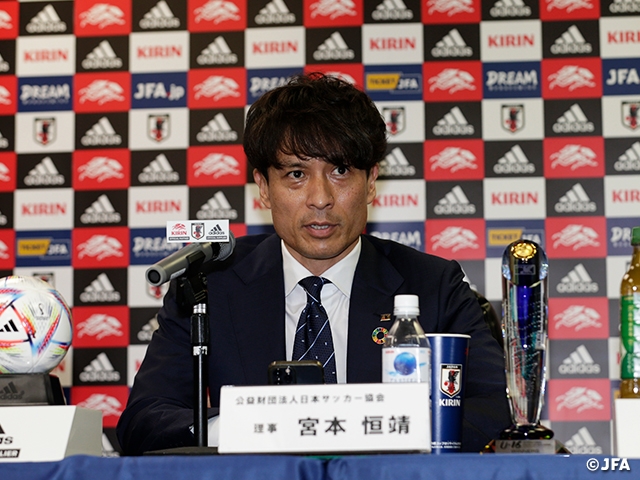 President OKUBO Yoshio of the Miyagi Football Association followed by sharing his take on what this tournament has to offer not only for the players but for the coaches as well, “It's a tournament that brings together world-standard teams of the same age group, so I think the competition will be at a very high level. I want the players to digest what they see and feel in their own way and make it their goal. I hope the coaches will also have a positive influence on the players.”

“The Japan National Team have now become a regular participant in the World Cup, and this is the result of our continuous efforts to strengthen our players in the developmental age group. I want the players to use this tournament as a tool to raise their standards and perspective, in order to become a member of the national team,” said Miyamoto, sharing his hopes that the first international tournament for the U-16 category in three years will serve as an opportunity to restart the strengthening of the development process for this age group. 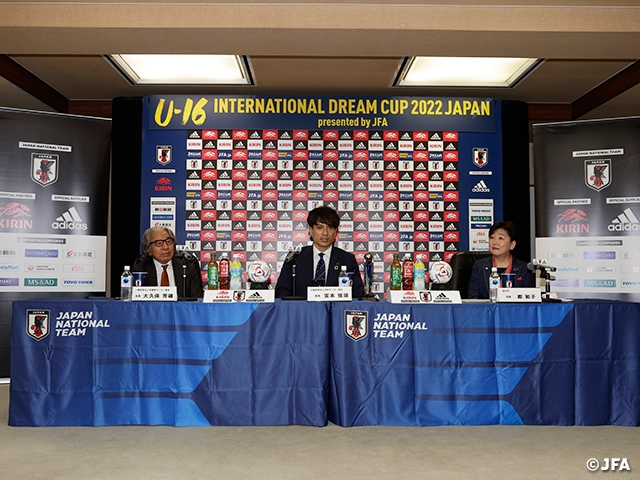 KORI Kazuko, Mayor of Sendai City
First of all, the City of Sendai is very pleased to be able to host the event in Sendai for the first time in three years. KUBO Takefusa, who is now playing for the Japan National Team, and NAKAJIMA Motohiko, who is truly contributing to Vegalta Sendai, have also experienced this tournament, and it is an opportunity to find the next player who will thrive in the professional world and go on to become a world-class player. Admission is free, so we hope that many people will come to the stadium to watch the matches.

MIYAMOTO Tsuneyasu, Member of JFA Executive Committee
The tournament, now in its sixth edition, has been a platform for the development of many U-16 players in the past. Through the cultural exchange aspect of this tournament, we believe that the tournament contributes not only to the competition, but also to the development of the players' personalities. Mexico, Uruguay and South Korea, who are regular participants in the international tournaments for the development age group, are scheduled to take part in this year's tournament, so we are expecting a tournament full of exciting matches and hope that our players will showcase a strong performance as the representatives of Japan.

OKUBO Yoshio, President of Miyagi Football Association
I would like to thank the JFA for their tireless efforts to make this tournament happen for the first time in three years. We are very happy that the City of Sendai has agreed to host the event under the current circumstances, and we are very encouraged by their support. This year we will welcome Mexico, Uruguay and South Korea, and I think it will be a great learning experience to play against teams from different countries and continents. We will do our best to run the tournament while taking necessary countermeasures to prevent the spread of Covid-19.

MORIYAMA Yoshiro, Coach of U-16 Japan National Team *Appeared in a video message
A lot of players have developed through this tournament. I think that the players who made the national team and the Olympic team, were greatly influenced by playing against strong countries in this tournament. We will be aiming to win the tournament amongst a group of countries that are in realistic positions to aim for the top spots in the World Cup. We hope to show everything we can on the field and deliver an exciting match to the people of Sendai City.