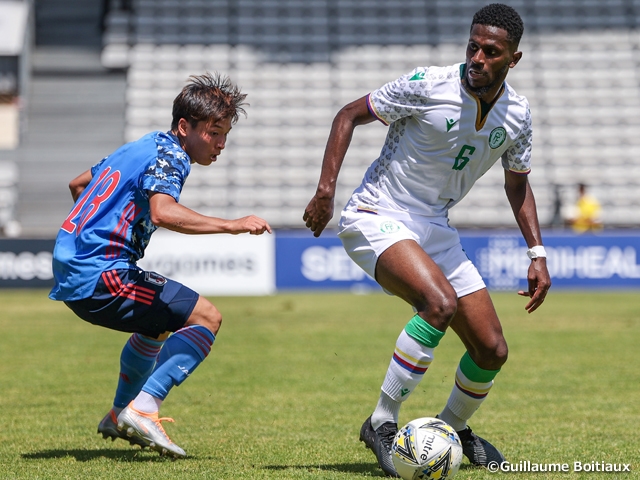 On Friday 3 June, the second group stage fixtures of the 48th Maurice Revello Tournament (formerly Toulon Tournament) took place in France, where the U-19 Japan National Team faced the U-21 Comoros National Team.

The match was originally scheduled to kick off at 14:00 local time, but due to the late arrival of the Comoros team bus, the match was delayed for approximately 25 minutes. 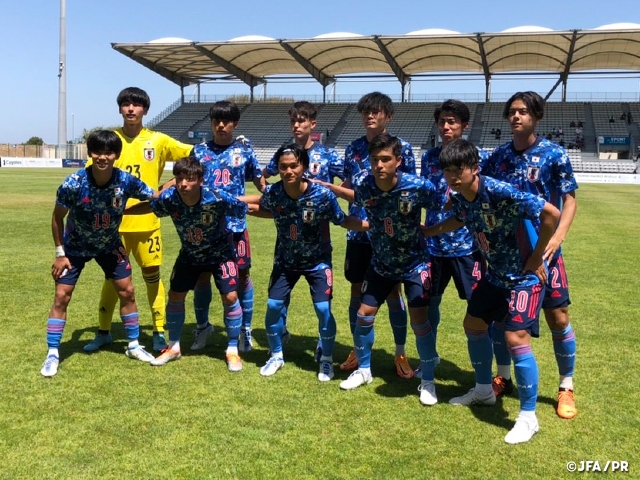 Japan entered the match making five changes to their starting line-up since the first match, but it was Comoros who took control of the match in the early going. Facing the Comoros side that consist of many talented players with great athleticism, Japan struggled to create any offensive threats. The team also failed to collect the loose balls, allowing their opponents to freely take shots from all angles, but goalkeeper KIMURA Ryoya (#23), who showcased a superb performance in the first match, once again made his presence felt in front of the goal, along with KIKUCHI Shuta (#2) who made tenacious efforts to defend the Japanese goal.

While Comoros continued to dominate the match in the second half, YOKOYAMA Ayumu (#10) connected with a free kick to record Japan’s first shot in the 59th minute.

Gradually gaining momentum, Japan marked two more shots in the 62nd and 64th minute, but both attempts fell short from capturing the target. In the 82nd minute, MASUKAKE Yugo (#15), who entered as a substitute in the second half, responded to a through-ball to enter the penalty area but his shot was saved by the opposing goalkeeper. After Kimura made two more big saves in the 80th and 84th minute, the referee blew the whistle to signal the end of regulation time.

With the match tied after 90 minutes of play, both teams were rewarded with a point, and in accordance with the tournament regulations, the match entered a penalty shoot-out to determine the winner, who will be rewarded with another point.

While it was clear to all that Kimura was the standout performer during regulation time, it was the Comorian goalkeeper who stole the show in the shootout, making three consecutive saves to deny the Japanese spot takers. Kimura also made a save to deny the third spot taker, but the East African side was awarded the extra point after winning the shoot-out 3-0.

Adding a point to their tally, Japan now have four points and set to face the U-19 Colombia National Team on Monday 6 June. 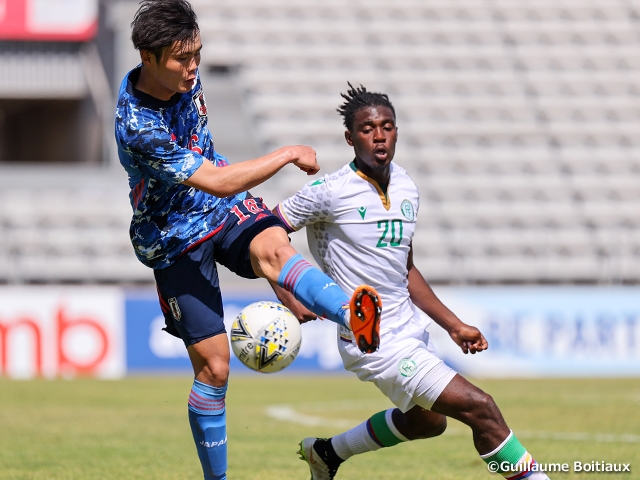 DF #14 TAKAHASHI Cendagorta Niko (FC Barcelona/Spain)
I was amazed by the agility and physique of the Comorian players. It was frustrating that we couldn’t capitalise on the many opportunities we had. We lost in penalties this time, so we will try to score goals and win our next match.

DF #19 MATSUDA Hayate (Mito HollyHock)
Following our match against Algeria, we were once again overwhelmed by the athleticism and speed of our opponents. Although we lost the match in penalties, we should be proud of the fact that we managed to keep back-to-back clean sheets. However, in terms of offence, we couldn’t create many chances to enter the final third, despite being able to possess the ball in our own half. The tournament is not over yet, so we will continue to prepare ourselves for our next match.

MF #20 FUKUI Taichi (Sagan Tosu U-18)
This match was a very important match for us, but we ended up losing in penalties. There were times when we were overwhelmed by the speed and physicality of our opponents, but we managed to showcase a persistent effort to keep a clean sheet. However, this match reminded us that we need more creativity and to play with more quality in the final third in order to compete at the international stage. We still have a match against Colombia, so we will focus on recovering our conditions and prepare ourselves in the best way possible so that we can advance to the next stage.