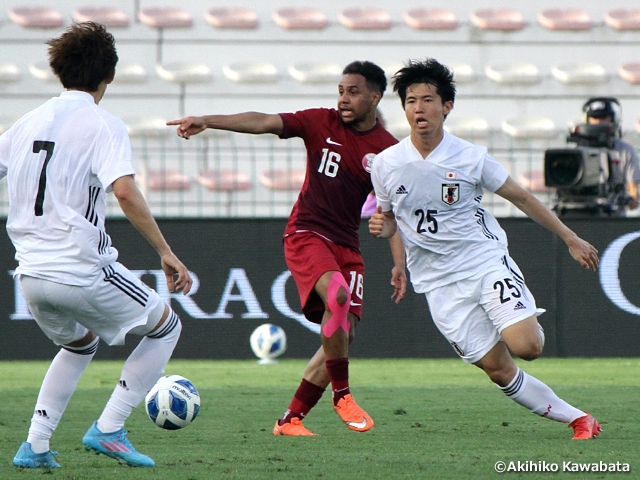 On Saturday 26 March, the U-21 Japan National Team played their second match of the Dubai Cup U-23 against the U-23 Qatar National Team.

The U-21 Japan National Team was launched this year with the aim of competing in the Games of the XXXIII Olympiad (Paris 2024) in two years’ time and under the leadership of coach OIWA Go, the team started off their first international competition with a 1-0 victory over the U-23 Croatia National Team. With the team given just two days between matches, coach Oiwa rotated eight players in their second match of the tournament held in UAE.

Despite seeing a drastic change in their starting line-up, the team remained highly motivated, as Suzuki later mentioned, “After being benched in the first match, I was determined to put up a strong performance in the team’s second match.”

However, with some of the players playing together for the first time, it was evident that the team was not on the same page, as coach Oiwa later reflected, “The first half did not go according to our plan.” Suzuki also shared his remorse for their first half performance, “The centre-backs needed to carry the ball a bit more.” Although Japan created more opportunities than their opponent in the first half, the team made many mistakes which led their plays to become more passive and failed to take control of the match in the first 45 minutes. 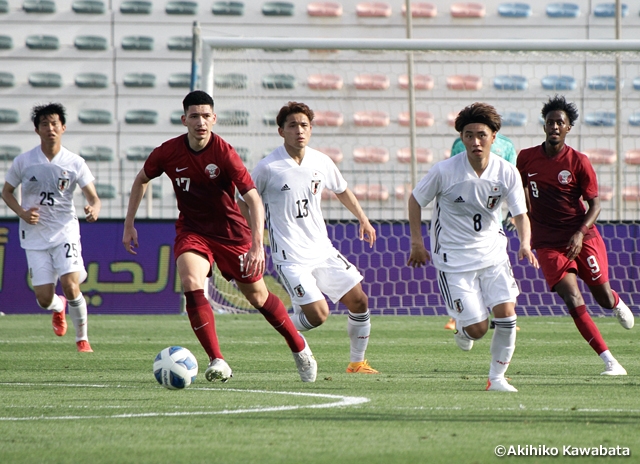 Following their struggles in the first half, the Japanese side made strategical and mental adjustments during halftime, which allowed them to start the second half in full strides. The opening goal came in the 53rd minute, when Hosoya broke through the right flank before sending a cross to Saito, who calmly controlled the ball before slotting the ball into the corner of the goal, as the midfielder later reflected, “I am glad I was able to get the ball through the defender’s legs.”

Led by Kokubo, Japan continued to showcase a solid performance in defence, keeping the Qatari side at bay. While the defence did their part to keep the clean sheet intact, the offence responded by scoring the second goal in the 86th minute, when second half substitute YAMAMOTO Rihito (Tokyo Verdy) converted a deflection of a corner kick with a dynamic volley shot. 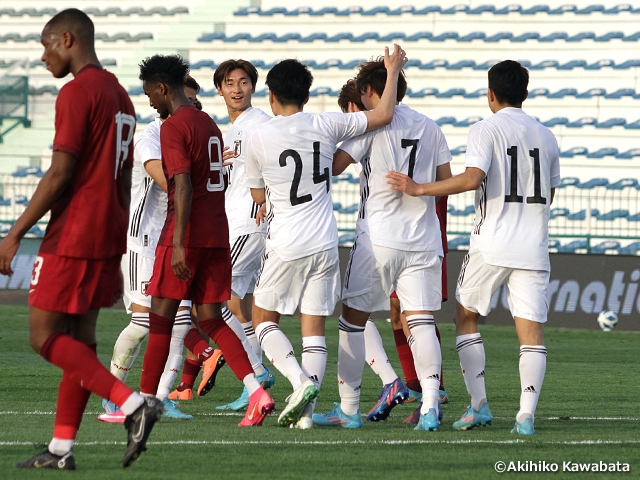 Despite their early struggles, Japan managed to walk away with a 2-0 victory, as coach Oiwa commented after the match, “We entered this match with a completely different line-up from the first match. The players did a great job adjusting in the second half and demonstrating the team’s aim in various aspects of the game.”

With this win, Japan is now through to the tournament final, which will take place on Tuesday 29 March against the U-23 Saudi Arabia National Team, who have also won both of their matches.

OIWA Go, Coach
In the first half, we were not able to effectively utilise the open space and couldn’t muster up the courage to press forward. However, we managed to make the necessary adjustments during halftime. We lacked quality in both offence and defence, so I demanded the players to step it up. The struggles we experienced today are something that could happen in our future competitions in Asia, so I think the team was able to gain a precious learning experience.

DF #25 SUZUKI Kaito (Tochigi SC)
Including myself, it felt like our defence was a bit overwhelmed by our opponents’ intensity level in the first half. If we could have matched the intensity level from the start, this could have been a much easier match for us. Whether it’s the atmosphere of the venue or the ruling of the referees, international matches have a different vibe compared to domestic matches, so this was a great experience.

MF #7 YAMAMOTO Rihito (Tokyo Verdy)
I didn’t want to give our opponents the opportunity to counter us, so I was just focused on finishing the play with a shot. Fortunately for me, I was able to make good contact and score a goal. I wanted to help the team by scoring or assisting a goal if I was given the opportunity to play, so I am happy that I was able to do that. However, it felt like I needed to do a better job managing the game and possessing the ball, so those are some of the areas I hope to improve ahead of our next match.

MF #10 SAITO Koki (Lommel SK/Belgium)
I am simply very happy with this result. I have been desperate to score goals, so I am just relieved now, especially after I struck the post in the first half. The fact that I was able to keep my cool in front of the goal like that shows how much I have improved as a player, and I hope to keep this mentality for our upcoming matches.