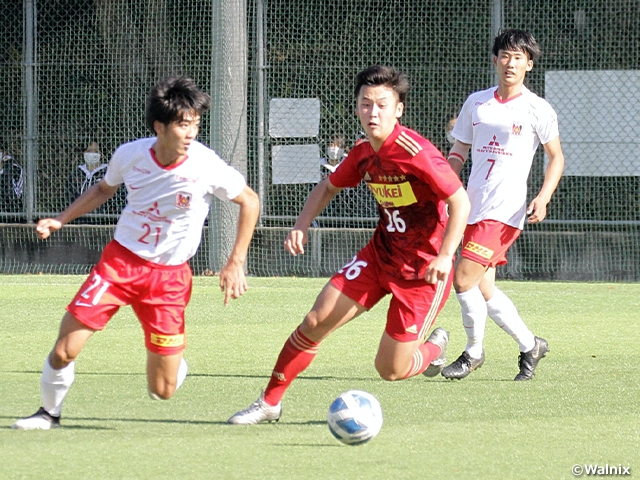 One week following their loss against Funabashi Municipal High School (Chiba) at the prefectural final of the All Japan High School Soccer Tournament, Ryutsu Keizai University Kashiwa High School (Chiba) welcomed Urawa Red Diamonds Youth (Saitama) to their home field. With both teams still in contention for the title race, this match was a crucial match for both sides, as coach ENOMOTO Masahiro of Ryutsu Keizai Kashiwa mentioned before the match, “Our mental strengths will be tested.”

Coach Enomoto reflected on the team’s loss against Funabashi Municipal, “To be honest, we were devastated,” mentioning that he spent time talking with the senior players one-on-one to give them the chance to open up and share their feelings. He explained that his players were all eager to redeem themselves at the Premier League. Although the coach was considering to utilise the younger players instead of the senior players who were mentally struck by the defeat, he ultimately decided on giving the senior players the chance to rectify their season, that was deeply impacted by the pandemic.

On this day, Ryutsu Keizai Kashiwa’s starting line-up featured only the senior players, while players who were yet to play at the Premier League were also given the opportunity to enter the match as substitutes. “Everybody was fired-up for this match, including the players on the bench.” Just as TAMURA Riku (#6) later reflected, the Ryutsu Keizai eleven showcased tremendous enthusiasm to start the match, applying aggressive pressure to force mistakes from the opposing side, which led to the opening goal scored by SHINGU Kaito (#26).

“We entered the match poorly, so we wanted to start off the second half strong.” After conceding the opening goal in the first half, Urawa’s MORI Kaito (#8) mentioned that his side kept encouraging each other to pick up the pace in the second half. In the 50th minute, Mori showcased a spectacular individual effort to score the equaliser. However, the home side retook the lead just 10 minutes later, when Tamura’s corner kick induced an own goal given up by Urawa.

In efforts to level the match, Urawa rallied in the closing minutes. After a player from Ryutsu Keizai was ejected from the match, Urawa applied even more pressure upfront, but the home side displayed tenacious efforts to hold onto their lead, running away with a 2-1 victory. With this victory, Ryutsu Keizai Kashiwa has kept their title hopes alive, as they are now in fourth place at the Premier League.

ENOMOTO Masahiro, Coach (Ryutsu Keizai University Kashiwa High School)
The loss at the prefectural qualifier (for the All Japan High School Soccer Tournament) was very disappointing, but I told my players that they must acknowledge this experience as “one of many losses” in their football career and move on. Our players showed great heart in today’s match. However, this win does not make up for the entire season, just as our loss at the qualifier did not end our season. We must reflect on the match and strive to improve ourselves ahead of the next match.

DF #6 TAMURA Riku (Ryutsu Keizai University Kashiwa High School)
Our coach could have chosen to turn to the new team, but instead, he trusted us senior players, so we really did not want to let him down. The players ran an average of six kilometres per player just in the first half, showing how hard we played in this match. We entered the second half poorly, which led to us conceding the equaliser, but we managed to pick up our pace after that goal. The substituted players did a great job to help the team score the go-ahead goal, as their presence and work ethic really contributed to the team’s victory.

IKEDA Nobuyasu, Coach (Urawa Red Diamonds Youth)
We conceded the opening goal from our own mistake, but rather than the mistake itself, we must address the play building up to that goal. The players must nurture their ability to recognise the game flow. If we continue to make back passes like that in situations where our opponent is applying aggressive pressure from their front line, it is inevitable to concede a goal, and the players must realise that. However, all and all, it was evident that our team was making forward progress, so that is a positive aspect we can take back from this match.

MF #8 MORI Kaito (Urawa Red Diamonds Youth)
This is a match we should have not lost. With our opponent applying aggressive pressure in the early minutes of the match, we needed to counter them by exploiting the open space behind their midfield, but we failed to execute such plays as a team. When I scored the goal, I knew the opposing defender was dropping back, so I intentionally slowed down before taking a shot. I let my game intuition take over to score that goal. 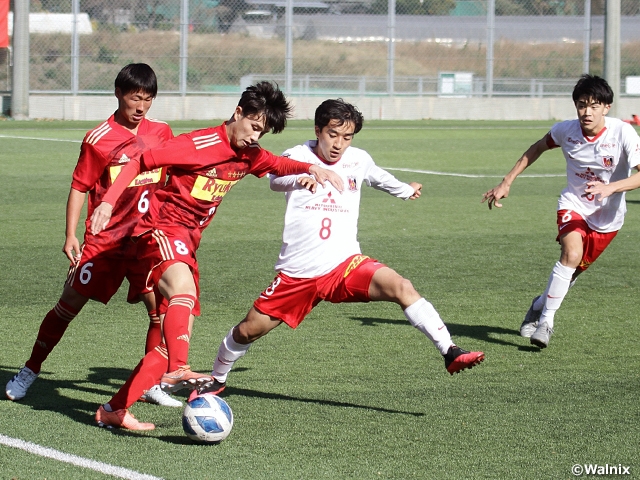 Despite giving up the opening goal to Funabashi Municipal High School (Chiba), Yokohama F. Marinos Youth (Kanagawa) rallied in the second half to score four goals to earn a come from behind victory. After scoring a goal apiece in both halves, Omiya Ardija U18 (Saitama) became the first team to win against Yokohama FC Youth (Kanagawa) at the Premier League this season. The match between Kashiwa Reysol U-18 (Chiba) and FC Tokyo U-18 (Tokyo) has been postponed due to the effects of COVID-19. The match is rescheduled to Sunday 13 December.