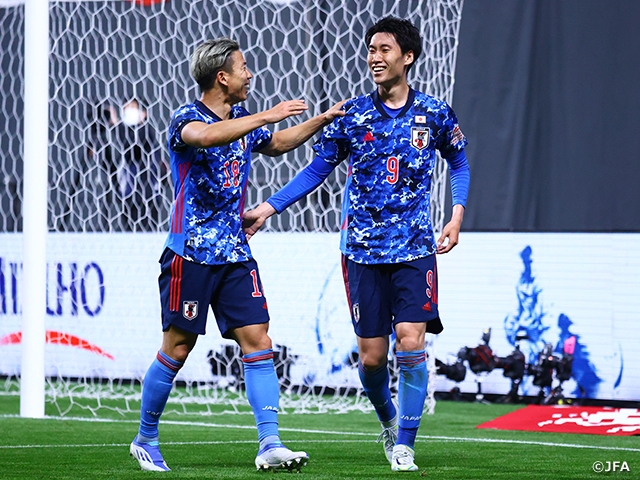 On Thursday 2 June, the SAMURAI BLUE (Japan National Team) faced the Paraguay National Team in the KIRIN CHALLENGE CUP 2022 at Sapporo Dome, where they won 4-1 to start off the four-game series ahead of the FIFA World Cup Qatar 2022™, which is scheduled to kick-off in November.

ASANO Takuma (VfL Bochum) and KAMADA Daichi (Eintracht Frankfurt) scored in the first half, while MITOMA Kaoru (Royale Union Saint‑Gilloise) and second half substitute, TANAKA Ao (Fortuna Dusseldorf), each scored a goal in the second half.

In a match where the players need to make a case for their spot on the World Cup squad, and the team needing to build-up ahead of the global tournament in November, coach MORIYASU Hajime elected to test a different line-up from the final round of the Asian qualifiers.

ITO Hiroki (VfB Stuttgart) made his debut for the SAMURAI BLUE, as the 23 year-older started as the left-fullback along with YOSHIDA Maya (UC Sampdoria), TANIGUCHI Shogo (Kawasaki Frontale), and YAMANE Miki (Kawasaki Frontale) to form the four-man defence line in front of goalkeeper SCHMIDT Daniel (Sint-Truidense VV). ENDO Wataru (VfB Stuttgart) started as the defensive midfielder while Kamada and HARAGUCHI Genki (1.FC Union Berlin) were named as the two attacking midfielders. With Asano positioned in the centre, Mitoma and DOAN Ritsu (PSV Eindhoven) were positioned in the flanks to serve as the two wingers. 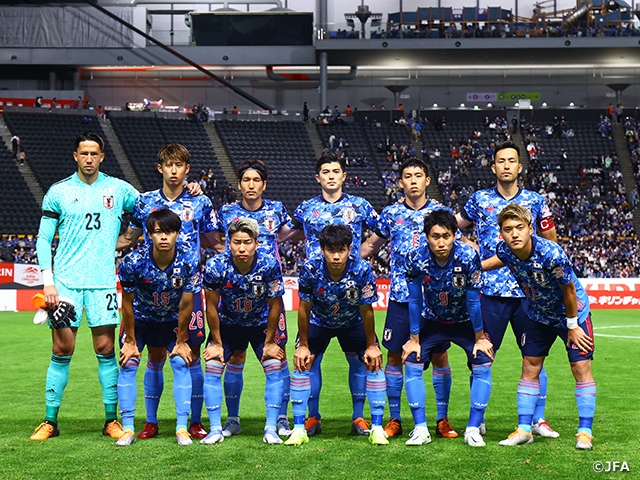 The match started with Japan taking the initiative by attacking the left side, as Mitoma initiated number of chances including the attempt made by Doan in the seventh minute and Kamada’s left footed shot that ricocheted off the post in the 11th minute.

Japan continued to evade the pressure and connect passes at a high tempo, creating chances to close in on the opposing goal, and the long-awaited moment arrived in the 36th minute. The play was initiated by Ito’s long feed, which Asano responded to pass back to Haraguchi, who delivered a well timed though ball to assist the goal of Asano.

With momentum on their side, Japan doubled their lead in the 42nd minute, when Kamada connected with the cross sent by Doan, as the header struck by the midfielder deflected off the goalkeeper before finding the back of the net.

After finishing eighth out of ten teams in the South American qualifiers and missing out on the FIFA World Cup Qatar 2022™, Paraguay started rebuilding their team for the next World Cup in 2026. The South American side applied aggressive pressure to win the ball and initiate counterattacks, which led to the shots taken by Blas RIVEROS and Oscar ROMERO midway into the first half, but Schmidt was there to make the save.

Coach Moriyasu made changes to start the second half, as ITAKURA Kou (FC Schalke 04) was placed as the defensive midfielder, MAEDA Daizen (Celtic FC) as the central striker, and NAKAYAMA Yuta (PEC Zwolle) as the left fullback, shifting Ito into the centre-back position.

In the 59th minute, Paraguay exploited the defensive lapse of the Japanese defence to cut down the deficit in half through the goal of Derlis GONZALEZ. However, Japan responded right away, with Haraguchi assisting the superb goal scored by Mitoma to make it 3-1. 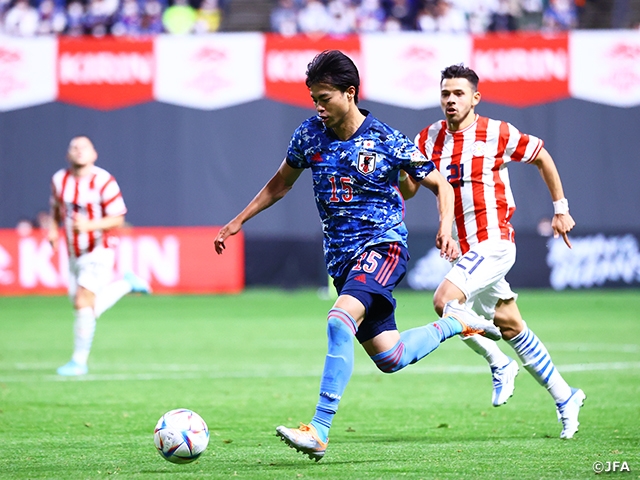 With Tanaka coming off the bench in the 61st minute, Japan continued to create chances to threaten the opposing goal. In the 69th minute, Kamada responded to a through ball delivered by Doan and drew a foul inside the penalty area. It was Doan who stepped up to take the spot kick, but his attempt was denied by the Paraguayan goalkeeper.

Paraguay also came close in several occasions, including the shot taken by Miguel ALMIRON and the attempt made by Luis ZARATE off of a corner kick, but fell short from finding the back of the net.

The introduction of FURUHASHI Kyogo (Celtic FC) in the 82nd minute added more layers to the Japanese offence, which led to the goal scored by Tanaka in the 85th minute. Japan did not let up until the end to secure the victory, as they dominated with an onslaught of 23 shots to their opponents' eight.

Before kick-off, a moment of silence was observed for former Japan National Team Head Coach Mr. Ivica OSIM, who passed away on 1 May. 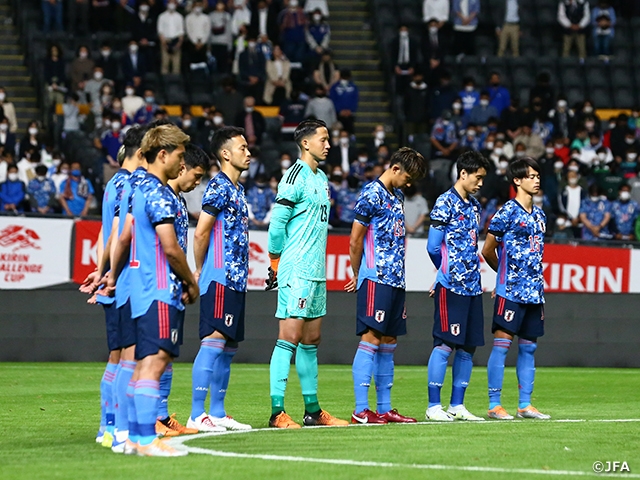 MORIYASU Hajime, Head Coach of SAMURAI BLUE (Japan National Team)
I am happy with today's match result and the fact that the players fought with high goals in mind. Although Paraguay are not competing in the upcoming World Cup, they are a South American powerhouse. I think it is commendable that the players fought against this opponent with a solid attitude, displaying great individual efforts, while also working in tandem to fight as a team, and showing their desire to make progress in order to achieve results at the World Cup.

I told the players during yesterday's training session and meeting that I wanted them to show that they could work as a team without losing the team strength and win no matter who they played with. And I feel that they really showed that they are capable of functioning as a team while also demonstrating their individual strengths in today’s match. Seeing the players' determination to fight their way to victory, I was once again inspired to move forward with high aspirations to strengthen Japan for the World Cup.

We took more than 20 shots, and while I think I have to praise the team for the chances they created and the goals they scored, I still think we could have attacked with more quality. In terms of our transition from defence to offence, there were still occasions where the passer and receiver were not on the same page. We will now fight against higher level opponents in the world, which means more intensity with less time and space to work with. We must improve the quality of our passes when making the transition from defence to offence, because if we can’t make that transition, we will exhaust ourselves from all the time we spend on defence. As for the goal we conceded, the defence line tried to connect the ball instead of just clearing it away. It hurts to concede a goal, but I appreciate their efforts.

For Ito, this was his first appearance for the national team, and I am sure he felt a lot of pressure and nerves, but he certainly showed the potential that he has. His tight defence, physical ability and competitiveness gives us another starting point for our offence. He played with great determination and aggressiveness. He made some mistakes when trying to connect the ball from the defence line, but I hope he will continue to take on challenges without fearing to make mistakes.

In 2018, our match was cancelled due to the Hokkaido Eastern Iburi earthquake, and we are very grateful to the people of Sapporo for all the support the team received during that time. As a way of repaying the kindness we received at that time, we wanted to bring energy and courage to everyone by playing a match with a crowd here in Sapporo, so we hope we were able to convey our gratitude through this match.

DF #26 ITO Hiroki (VfB Stuttgart/Germany)
It was my first time playing for the national team, but with the support of my teammates, I was able to get into the game without any problem. Mitoma, Yoshida, Kamada, and Endo also provided good support, allowing me to stay relaxed and play with composure. I think we dominated the game in the first half, and I was able to combine with Mitoma on several occasions to create some good chances. But I need to raise the quality of my plays and increase the number of my offensive involvement. The goal we conceded in the second half was my caused by my mistake, so I must reflect on that as well. As a centre-back, I would like to communicate more so that I can improve the team's overall performance and continue to seek ways to contribute for the team. 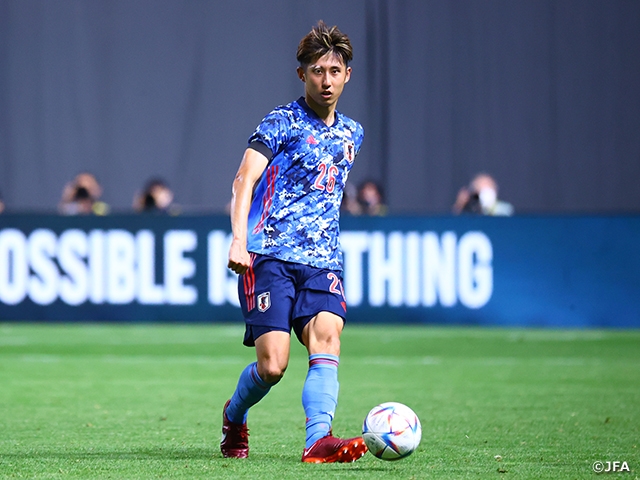 MF/FW #9 KAMADA Daichi (Eintracht Frankfurt/Germany)
Even with a different line-up, I knew I had to play well. The team' s victory was my top priority, but I also wanted to score a goal on top of that. The opening goal was huge for us, but we also missed out on many chances, so we still need to be more critical in the final third. I don't remember exactly how I scored, but I had the impression that strong teams with a 4-3-3 formation tends to have their inside midfielders scoring from those areas, so I was anticipating to do the same. Our opponents were clearly tired in the second half, but I think it was because we executed our game plan from the first half that things turned out the way they did.

MF/FW #18 ASANO Takuma (VfL Bochum/Germany)
When I scored, I was able to keep my cool and see the position of the goalkeeper, which allowed me to make that decision to chip the ball. I wasn’t so sure if it would go in, so I am glad it went in. I think my hold-up play has developed since I went abroad, but today's match once again reminded me the importance of the target man. I think it is an area that can really help this team. I hope I was able to make a case for myself, but I am aware that I still have a long way to go to catch up with the rest of my teammates. I will devote everything I have to these four matches. I will continue to work hard on what I have to do, including the preparations. 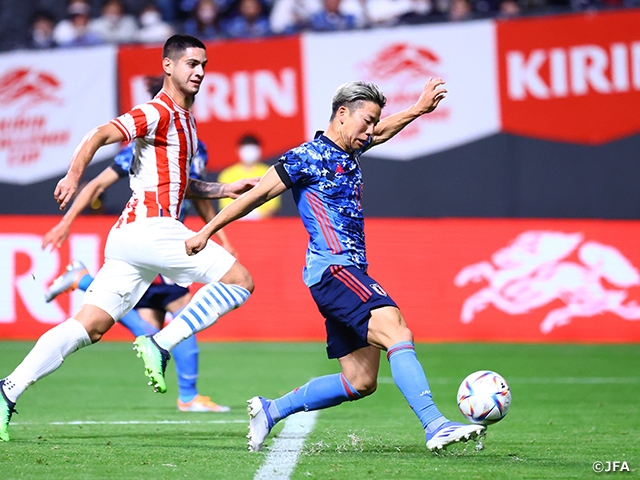 Guillermo BARROS SCHELOTTO, Head Coach of Paraguay National Team
I think the result of today's match speaks for itself. It was a game where Japan dominated the ball possession, and even though we pressed well and scored a goal, we were not allowed to do what we wanted to do for the most part of the game. Soon after scoring a goal, we conceded a goal to Japan, which I think was partly due to our lack of experience and the absence of our key players. Several players were unable to play, partly due to logistics and quarantine measures to prevent the spread of Covid-19, and it really showed in the results. We hope to continue building a new team by playing more matches from here on.