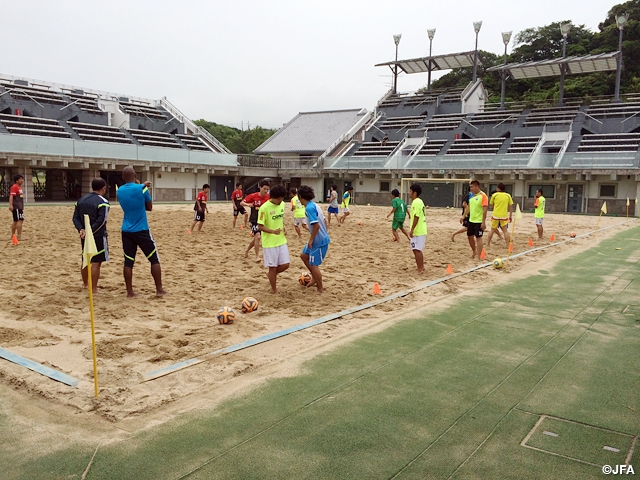 Japan Beach Football Coach Mendes held fifth clinic in Senan Satoumi Park in Osaka, on two days during Sat. 7 June to Sun. 8 June. The players and coaches from prefectures of Kansai region participated in the lecture and practical training.
He made some changes to the program based on the feedback from the previous sessions. He took longer time for the parts many participants raised questions and the parts participants likely to be interested in, he featured demonstration to help them understand better.

The participants are concentrated to listen to head coach’s instructions on the practical training – the movement of on/off and the positioning, thorough explanation of the height and quality of ball.
And he pointed out the importance of watching the other side players, lectured in what perspective you should understand the players’ characteristic and the system, and leverage the information gathered for own play. 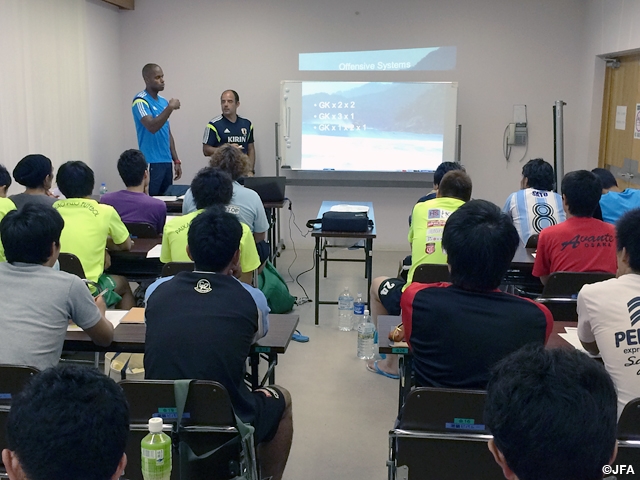 NEGURA Keishi （DORSAL M.FC ASHIYA）
I was excited to attend national team head coach’s clinic, the first time experience for me. I got familiar with the importance of a scoop technique and a loop pass again, although they are basic skills. Regarding physical training, I realized I can raise motivation of the players for not just running but the running as they use the ball.
He took time to explain our questions one by one in easy to understand format, it was the clinic in a good atmosphere.
It was beneficial for me to learn about detail such as the positioning and quality of ball as he pointed out. I want to implement this training’s contents on our team and improve the skills of my team.
I would hope to get this kind of clinic organized in Kansai region again.

MAKINO Tatsuya （JOY BSC Salvage）
It was well-organized and very easy to understand training program. They explained the basic skills and system theory featuring video followed by practical training. It was motivating and informative as the head coach and the player of national team conducting this sort of clinic in region every place, this will help raise technical skill of players and find a new talented players.
I belong to the team recently set up, few books and video are around to study beach soccer, and I wish I could have listened to this training with more of my team mates.

TASHIRO Teppei （Alpinista）
We’ve been studying beach soccer without clue, watching the world cup video and the other side players. I learned many things on this clinic as the clinic was specialized and clearly instructed.
I was trying hard to catch up the clinic program as the level of the participant is high. In practical training, the coach instructed us to demonstrate high requirement for each play, it reminded me of the importance of basic skills.
It was shocking to listen to learn the way of running on the sand, a basic skill but previously unknown to me.
It is not easy to practice every day but I want to set the theme of the day when I hold training.

OSHIMA Atsushi （Osaka LequiosBS）
It has been a year since I started playing beach soccer, but I learned a lot for getting first hand advice from national team head coach. I fully realized there are quite a few things I need to improve.
It was exciting to play with the players of other teams in Kansai league. From now on, I want to take different approach in holding training of my team.

MINAMI Yosuke （AVANTE OSAKA）
It was valuable and very exciting to get direct coaching by national team head coach. It was bit difficult to do practical training of the system but I enjoyed learning them. I really felt how national team head coach and staff are anxious for “making stronger beach soccer of Japan”, and I as a player need to have higher motivation in playing.
It was impressive to know GK x 2 x 2, among the lecture program. My team usually uses other system; I could broaden my idea of system by learning the different system. And it was informative to learn how to make analysis of the other side and realized the importance of changing the way to play the game according to the other side’s style.
Character. 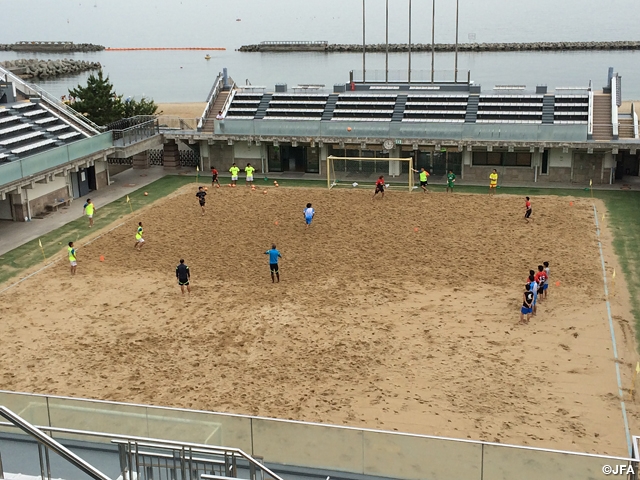