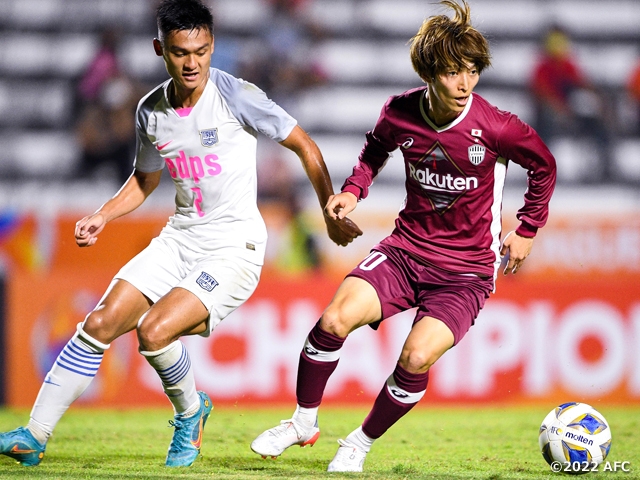 The second fixtures of the AFC Champions League (ACL) 2022 East group stage took place on Monday 18 and Tuesday 19 April, where Vissel Kobe, who had a bye in the first matchday, defeated Kitchee SC (Hong Kong) 2-1 to start off the competition. Kawasaki Frontale and Urawa Red Diamonds also won their matches 8-0 and 5-0 respectively, while Yokohama F. Marinos suffered their first loss in the group stage, losing 0-1 to Jeonbuk Hyundai Motors FC (Republic of Korea).

In Group J, Kobe's first match was delayed after Shanghai Port FC (China PR), originally scheduled to play Kobe in the first match, had to withdraw due to travel restrictions imposed by the Corona pandemic. As a result, Kobe entered the competition facing Kitchee, who defeated Chiangrai United FC (Thailand) 1-0 on Saturday 16. Despite being without their key player Andres INIESTA, coach Miguel Angel LOTINA earned his first victory in his second match in charge.

Kobe took the initiative from the early minutes and scored the opening goal in the 15th minute. The play came when the ball was delivered to the left flank, where Bojan KRKIC made a run to send a cross towards the centre. Although OSAKO Yuya was not able to connect with this delivery, GOKE Yuta was there to respond to the deflection caused by the goalkeeper, converting the loose ball into the net to put Kobe ahead.

Despite playing in the scorching heat of Buriram, Thailand, Kobe showed great composure to keep the ball moving, which led to another great opportunity created in the 30th minute, when NAKASAKA Yuya delivered a cross that allowed Osako to strike a shot into the net, but the play was called offside.

Kobe continued to show their dominance in the second half, as Goke and SAKAI Gotoku combined in the right side to setup chances for INOUE Shion and Osako.

The long-awaited second goal came in the 85th minute, when second half substitute YURUKI Koya drove into the penalty area from the left side before sending a lobbing pass to setup the goal of Inoue, giving Kobe a 2-0 lead.

With Kitchee rallying in the closing minutes, Kobe conceded to Alex AKANDE during additional time, but managed to walk away with a 2-1 victory. After the club had gone winless in 10 J.League matches since the start of the season, Kobe managed to win their first match since the ACL Play-offs on 15 March.

Following the match, coach Lotina commented, “This win has not only stopped the bad trend, but it will give us a mental boost for the upcoming matches.”

In Group H, Yokohama FM faced Korean powerhouse Jeonbuk Hyundai at Ho Chi Minh City, Vietnam on Tuesday 19, in which Yokohama was handed their first loss after conceding a PK to Jeonbuk in the first half.

The match saw Yokohama control the ball possession, but struggle to break down the Jeonbuk defence, who dropped deep in their territory. In the 31st minute, KIM Jin-su was brought down inside the Yokohama penalty area to earn a PK. Stanislav ILJUTCENKO stepped up to convert the spot kick to give the two-time ACL champions the lead.

Yokohama threatened the opposing goal with the shots taken by IWATA Tomoki and ELBER after the 40th minute mark, only to see their efforts being denied by the Jeonbuk goalkeeper Lee Bum-soo. In efforts to rally back, Yokohama made five substitutions in the second half, brining in the likes of KOIKE Yuta and Marcos JUNIOR, but ultimately fell short from equalising the match.

As a result, Jeonbuk, who had drawn with Sydney FC (Australia) in the first match, took the group lead with four points, while Yokohama trial in second place with three points.

After the match, Yokohama FM’s coach Kevin MUSCAT reflected, “We were able to control the match and create chances but needed to do a better job on making transitions, including the scene where we conceded the goal, and improve the quality of our plays in the final third.”

In Group I, Kawasaki faced Guangzhou FC at Johor Bahru, Malaysia on Monday 18. Facing a young Guangzhou side, CHINEN Kei, KURUMAYA Shintaro, and KOBAYASHI Yu each scored two goals apiece to give Kawasaki their first win in this group stage.

With the match taking place just three days following their first match, Kawasaki rotated their entire line-up except for their goalkeeper Jung Sung-ryong, and it was MIYAGI Ten who led the offence from the left side in the early minutes.

Chinen scored the opening goal from a corner kick in the seventh minute, followed by another goal scored in the 12th minute to give Kawasaki an early two-goal lead. After Kurumaya scored the third goal in the 16th minute, Kobayashi scored back-to-back goals in the 21st and 39th minute to put the match out of reach for Guangzhou, as the J.League champions led 5-0 at half time. With Miyagi, CHANATHIP, and Kurumaya adding on to the tally in the second half, Kawasaki comfortably won the match 8-0.

Three players made their professional debut in this match, as MATSUI Renji was named into the starting line-up, while IGARASHI Taiyo and TAKAI Kota were brought in as substitutes in the second half.

“The players fought aggressively from the start, which allowed us to take the initiative and score goals in crucial moments,” said coach ONIKI Toru, praising the aggression and the total team effort displayed by his players.

With this victory, Kawasaki remain in second place with four points, and they are set to face back-to-back matches against the group leaders Johor Darul Ta'zim (JDT), who defeated Ulsan Hyundai FC (Republic of Korea) 2-1 to start the group stage with consecutive wins.

On Monday 18, Urawa faced Shandong Taishan FC (China PR) at Buriram, Thailand, where they won 5-0 to claim the lead in Group F.

Against a young Shandong side, Urawa changed nine starters from the first match three days earlier and took the initiative through attacks from the right flank. The opening goal came in the 26th minute, when SEKINE Takahiro carried the ball into the final third to set up the goal of AKIMOTO Takahiro, who made his first start in the ACL. Five minutes later, Alexander SCHOLZ converted the PK earned by Akimoto to make it 2-0. 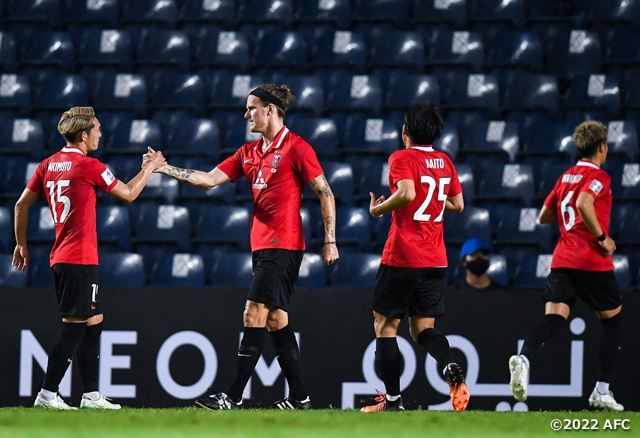 With momentum on their side, Urawa continued to dominate the match in the second half. Assisted by IWANAMI Takuya, the club’s new signing, Alex SCHALK, scored the team’s third goal in the 53rd minute, before scoring a direct free kick in the 76th minute, as the Dutch striker later reflected, “I have confidence in the quality of my free kicks.” Rookie, YASUI Kaito, added one more goal before the final whistle, as Urawa walked away with a 5-0 victory.

After the match, Urawa’s coach Ricardo RODRIGUEZ commented, “In the first half, we saw some creative plays on the right flank, and we were able to showcase what we wanted to do. The important thing is to keep earning points, so we hope to earn three points in our next match as well.”

In Group G, where no Japanese clubs play, Melbourne City FC (Australia) defeated United City FC (Philippines) 3-0, while BG Pathum United (Thailand) won against Jeonnam Dragons (Republic of Korea) 2-0. As a result, Melbourne are now in the lead, while Jeonnam dropped from first to third.

The East group stage will continue to take place in a two-legged round-robin format at centralised locations until Sunday 1 May. Top teams from each of the five groups along with the top three teams among the runners-up will advance to the knockout stage, scheduled to be held in August.