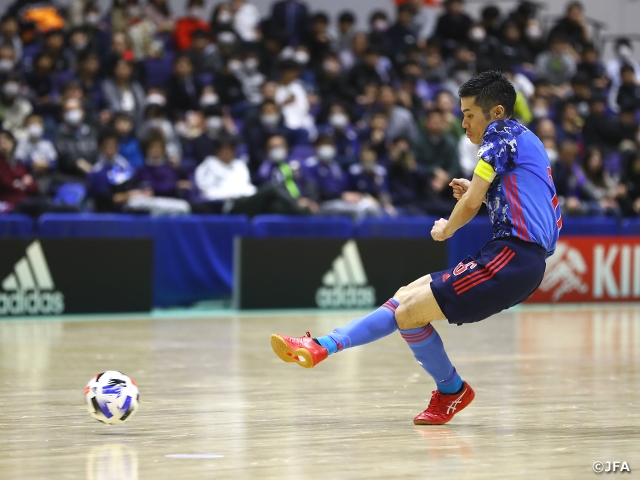 On Wednesday 19 February, the Japan Futsal National Team faced the Paraguay Futsal National Team in an international friendly match played at Hokkai Kitayell, Hokkaido. The match represented the first encounter between the two countries since the 2004 FIFA Futsal World Championship (current FIFA Futsal World Cup) played in Chinese Taipei, and only the second time the two faced each other. After losing the first encounter 4-5, the Japanese players were highly motivated to equalise the record. 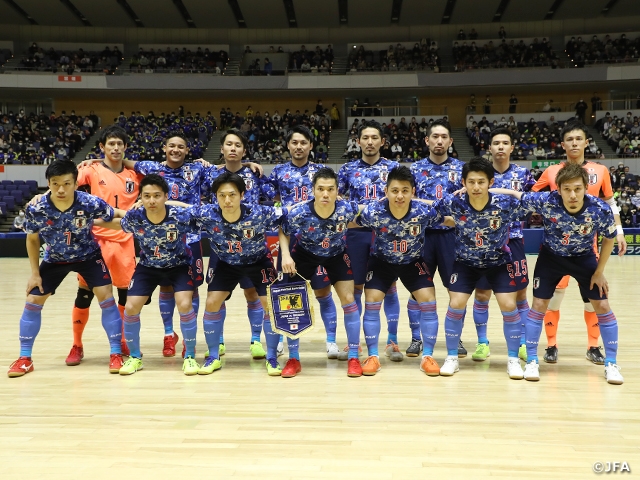 Coach Bruno GARCIA named SEKIGUCHI Yushi as the starting goalkeeper along with YOSHIKAWA Tomoki, HOSHI Shota, KATO Minami, and YAGI Kiyoto as the starting line-up. Despite showing high intensity from the start, Japan conceded back to back goals in the early minutes, as Paraguay’s Enmanuel AYALA scored the opener in the first minute, followed by an own goal conceded in the third minute.

Although the team gave up an early two goal lead, Japan started to take control of the match through their high pressure, as Paraguay’s coach Carlos CHILAVERT later reflected, “Japan applied aggressive pressure to induce our mistakes and anticipated to score goals. We weren’t given enough space to keep the ball moving and we were put in a very difficult situation.”

Japan created multiple opportunities through their short-counters and managed to score a goal just before the end of the first half. The goal scene came when Yoshikawa intercepted a pass before sending the ball upfront. Hoshi Shota made a fantastic touch to redirect the ball to MINAMOTO Akira, who converted the one-on-one against the goalkeeper.

After cutting down their deficit in half, Japan entered the second half with great momentum, but with great saves made by Paraguayan goalkeeper Giovanni GONZALEZ, the home side struggled to score the equaliser. However, the moment came in the 33rd minute, when Kato struck a sharp shot from a set-piece. The shot was blocked by the opponent, but Yoshikawa responded to the deflection and pierced a shot into the lower right corner to level the match, as he later reflected on the scene, “The opponent was anticipating for a pass, so I thought I had a chance if I aimed towards the corner of the goal.”

The crowd of 3,235 who gathered at Hokkai Kitayell rejoiced at the equaliser and cheered even stronger to support the Japanese players. Japan applied more pressure in offence to take the lead, but the Paraguayan side showed great persistency to keep the score tied. With two minutes left on the clock, Japan initiated their powerplay to add layers to their offence. However, despite their efforts to score the go-ahead goal, Japan conceded a goal after getting their pass intercepted in the final seconds of the game, allowing Paraguay to slot the ball into the open net just before the final buzzer, losing the match 2-3. 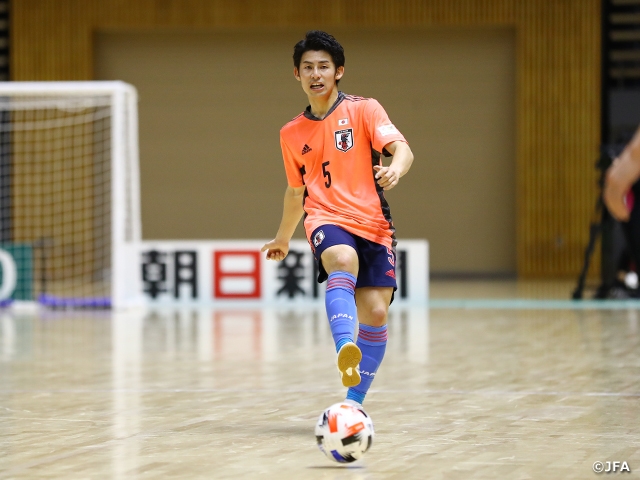 Bruno GARCIA, Coach (Japan Futsal National Team)
We were able to execute our game plan and showcase a fantastic match for 35 minutes, but we played poorly in the first five minutes, which cost us two goals. A strong and experienced team like Paraguay will always take advantage of such poor start. However, despite facing an uphill battle, we managed to take more shots to showcase a spectacular and entertaining performance in the second half, which allowed us to level the score. Towards the end of the match, we went for the victory by initiating our powerplay, but conceded a goal from an unfortunate paly. Paraguay deserved the win, but we also displayed a wonderful performance for 35 minutes, which proved that we could cope against any team in the world.

Carlos CHILAVERT, Coach (Paraguay Futsal National Team)
The match between two top quality teams of the world turned out to be a very competitive match. Paraguay has already earned a spot into the World Cup, while Japan is preparing towards the AFC Futsal Championship. Heading into this match, we knew this was going to be a tough match. Japan played with great intensity and aggression. We were actually surprised by the level of their performance in many occasions. We wish them the best luck at the Asian qualifiers.

FP #5 MINAMOTO Akira (Tachikawa/Fuchu Athletic F.C.)
I am very disappointed. There aren’t many matches played in Japan, and with this match being broadcasted live nationwide, we really wanted to earn a victory. We must be more careful of how we enter the match. If we concede two goals at the AFC Futsal Championship, it could cost us the match. We also started poorly in our match against Thailand in September, so we must make sure to implement this experience to improve ourselves.

FP #9 HIRATA Neto Antonio Massanori (AD Fundao)
For the exception of the first five minutes of the match, I feel like Japan was the better team, but we must be able to convert our chances. This was a match we could have won, and it shows that if we don’t capitalise on our opportunities, we can lose a match like this. I personally wasn’t able to showcase a good performance today, so once I return to Portugal, I will work hard to earn another chance with the national team.