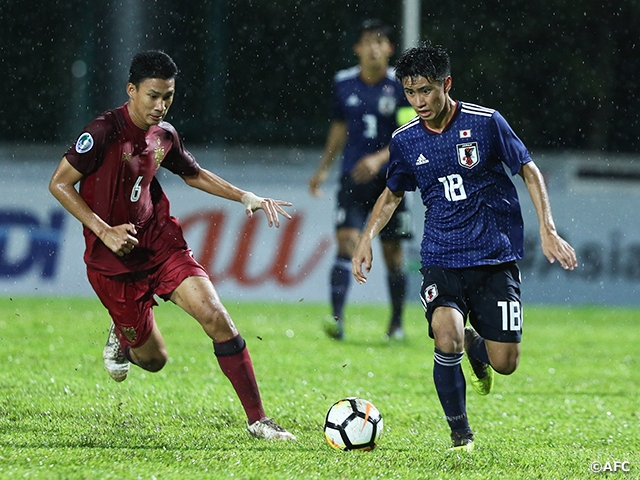 On Thursday 20 September, the U-16 Japan National Team won their first match of the AFC U-16 Championship Malaysia 2018 against the U-16 Thailand National Team 5-2.

As Coach MORIYAMA Yoshiro later reflected, “We conceded a goal early in the match to get off to a rough start,” Japan was caught off-guard and conceded the opening goal in the second minute of the match.

Despite conceding the early goal, the Japanese side kept their composure, as defender SUMI Kohshiro looked back, “Because it was so early in the match, we weren’t rattled by it.” In the seventh minute, midfielder NARUOKA Hikaru dribbled through the right flank before sending a cut back to YAMAUCHI Kakeru, who fired a mid-range shot. The shot was once blocked by the opposing defender, but ARAKI Ryotaro was there to respond and convert the loose ball to level the match. Just two minutes later, Araki responded to a through ball delivered by Yamauchi, creating a two-on-one situation against the Thai goalkeeper. Araki calmly dished the ball to KONDO Kuraba who slotted the ball into the net to give Japan the go-ahead goal.

However, in the 15th minute, assuming the opposing forward was in an offside position, the Japanese defenders stopped their play against a long ball and allowed the striker to score the equaliser. Defender HANDA Riku later regretted this play, “We had to play until the whistle was blown.”

With the team conceding the second goal in a such unfortunate fashion, it was thought that the momentum could have gone towards the Thailand side, but the Japanese players showed great resilience to retake the initiative of the match. After creating close opportunities in the 23rd and 29th minute, Japan retook the lead in the 35th minute, when Naruoka delivered a cut back to allow Araki to score with his header. With momentum on their side, Japan went onto score another goal before halftime, as Handa capitalised on a loose ball following a freekick in the 42nd minute to make the score 4-2 at the break.

Coach Moriyama described the second half as the team faced a tough stretch at the beginning, “We kept our focus to play simple, but we had our hands full with just clearing the ball. Our players were fully spent from devoting their energy in defence and lacked support in offence. We were forced to play passively.” However, the Japanese defence line showcased great persistence to keep the score line intact, and in the 90th minute, the late substitutes, NAKANO Ryuma and TOYAMA Shoji combined well to score the team’s fifth goal to seal the match. 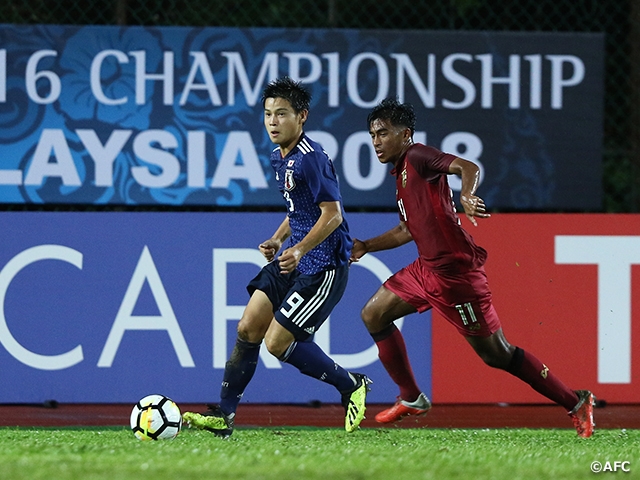 After finishing the match with a final score of 5-2, Coach Moriyama stated, “We aren’t satisfied with our performance, but the fact we earned three points in the first match is something we can be happy about.” Japan will now take on the U-16 Tajikistan National Team in their second group stage match on Sunday 23.

MORIYAMA Yoshiro, Coach (U-16 Japan National Team)
We didn’t enter the match well. Although our players did well to fight through the tough first half and win the match, we looked a little too stretched out and couldn’t play defence collectively. Ahead of our next match, we must improve on both our offence and defence. We couldn’t showcase much of our offence in the second half, and our defence were a little too light in those scenes where we conceded the goals. We must go back and watch the films to analyse what we must work on ahead of our next match.

MF #7 YAMAUCHI Kakeru (Vissel Kobe U-18)
It was great that we managed to take the lead in the first half, but we didn’t seem to be on the same page defensively in the second half, so that’s something we must work on. After getting instructed from the bench, we managed to make the necessary adjustments, but ideally, we need to be capable of making those adjustments by ourselves. However, we are happy that we won our first match. We will start talking to each other to prepare ourselves ahead of the next match.

MF #8 NARUOKA Hikaru (Shimizu S-Pulse Youth)
We enter the match with the intention to overwhelm our opponents, but conversely gave up a goal in the opening minutes of the match. However, we managed to stay positive and reset our mindset to fight through the remainder of the match. The fact that we were able to score back a goal right afterwards was huge for us. We faced a tough stretch in the second half, but the second half substitutes did a great job to score a goal.

FW #18 ARAKI Ryotaro (Higashi Fukuoka High School)
I really wanted to score a goal today, regardless of how scrappy it was. The loose ball came right at me in the first goal scene and I managed to head the ball into the net for the second goal. (Regarding the team’s third goal) I was facing the goalkeeper in a two-on-one situation, and even though I could have taken the shot myself, but I chose to go for the more optimal option. 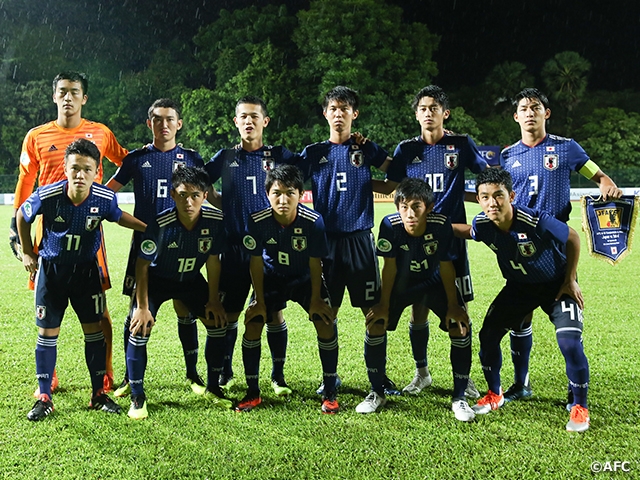