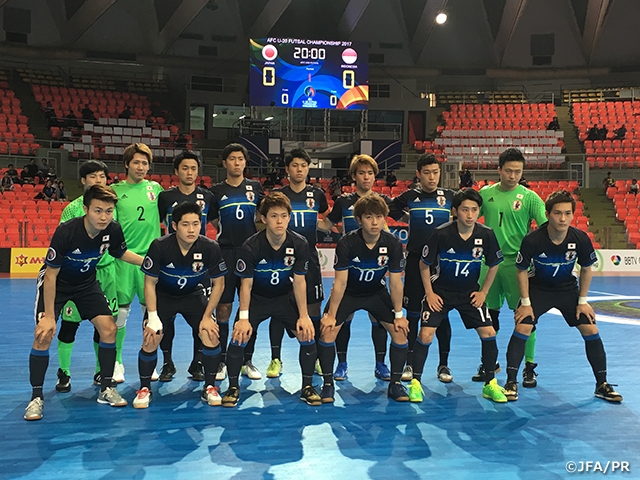 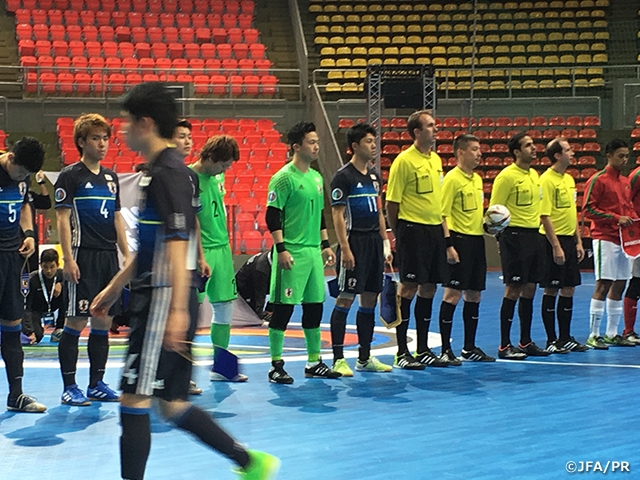 U-20 Japan Futsal National Team had their third group-stage match against Indonesia in the AFC U-20 Futsal Championship Thailand 2017 on Friday19 May. 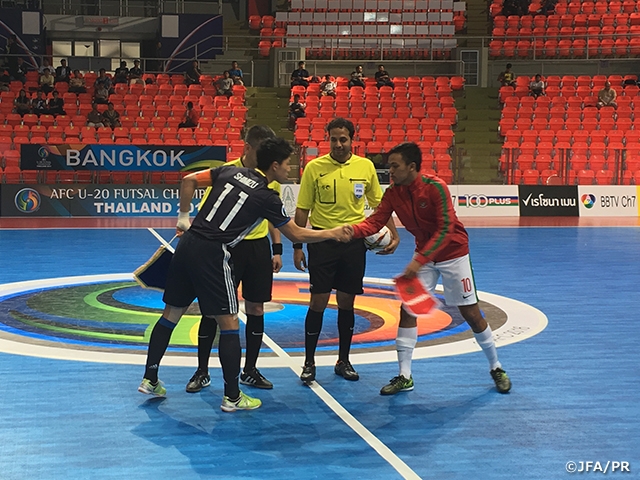 If Japan won this match, they would be the one of the top-two teams of the group and go through to the final round. In the beginning, Japan could manage the match with their own pace, defending Indonesian attacks, however in the 9th minute, Indonesia scored the opening goal; a shot which came from the right wing hit the Japanese net. Japan conceded the first goal again just like in their previous match. Japan carried on playing calmly though; in the 13th minute, SHIMIZU Kazuya (FUGADOR SUMIDA) smashed a ball to the front of the Indonesian goal and YAMADA Jiei (DEUCAO KOBE ASPIRANTE) made a final touch successfully direct the ball in to the net. Japan equalised and got momentum. In the 14th minute, Indonesia made a pass-mistake and Japan’s OKADA Shokei (NAGOYA OCEANS SATELLITE) directly kicked this back straight to the net. Japan successfully turned the game around before the end of the 1st half.

In the 2nd half, both teams competed evenly and 30 minutes passed without making the most of scoring chances. In that situation, Japan continued to work hard with rhythmical pass-work, and they could finally score their third goal. In the 34th minute, Shimizu received the ball from a kick-in and he carried on taking a successful shot to extend Japan’s lead to 3-1. Indonesia tried to attack the Japan’s goal persistently with their power-play. In the 37th minute, Japan, who had not allowed Indonesia to score any additional goals with their well-balanced defense, conceded a goal. Additionally, just 1.9 seconds before the end, Japan conceded another goal. Eventually, the match finished in a draw.

SUZUKI Ryuji, Coach
Just like the previous match against Tajikistan, it was an unacceptable result in terms of conceding the goals by opponent’s power-play towards the end of the match. However, it is still very important that the players did their best in such a mentally-difficult situation, and I must take the responsibility as a Coach that we could not win the match after all. We have one more chance, so tomorrow we will do our utmost to qualify for the final round.

FP #3 UCHIDA Shunta (FUCHU ATHLETIC F.C. SATELLITE)
Even though we have made the result just like the one against Tajikistan, we want to switch our minds to get ready for the next match against Vietnam as much as possible. We will definitely win and get the ticket to go through to the final round.

FP #7 NAKAMURA Mitsuru (PESCADOLA MACHIDA ASPIRANTE)
We ended up drawing the match again today. Followed by the previous match yesterday, we conceded a goal just a couple of seconds before the end. It is so regrettable that we could not win. We will strictly correct our mistakes that we have made so far, and switch our minds to kick-off the match against Vietnam tomorrow.

FP #13 YAMADA Jiei (DEUCAO KOBE ASPIRANTE)
How we launched our play in the beginning was good – I think it was good that we could finish the 1st half after turning the match around even though we conceded the opening goal. However, we allowed the equalising goal 1 second before the end of the match. We will change our minds now to prepare well for the next match against Vietnam.

*Local Time
*The schedule may be subject to change due to the team condition, the weather, etc.