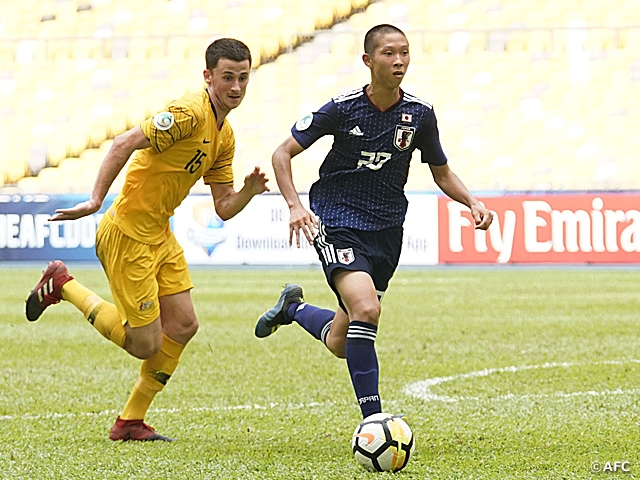 On Thursday 4 October, the U-16 Japan National Team won the match 3-1 against the U-16 Australia National Team at the semi-final of the AFC U-16 Championship Malaysia 2018. With the win, the team will enter the final scheduled to be held on Sunday 7 October.

After playing consecutive matches and earning their spot into the FIFA U-17 World Cup, Coach MORIYAMA Yoshiro described this semi-final match as a “Very difficult match, both physically and mentally.” With that in mind, the coach has elected to go with a fresh line-up where he rotated seven players from the quarterfinals match.

Goalkeeper SASAKI Masato (Kashiwa Reysol U-18) made his first start of the tournament while SAKO Maaya (Tokyo Verdy Youth) and ISHIDA Yusuke (Ichiritsu Funabashi High School) were named in the defence line. NAKANO Keita (Kyoto Sanga F.C. U-18) and MITO Shunsuke (JFA Academy Fukushima U18) positioned themselves in the midfield, with AOKI Yusuke (FC Tokyo U-18) and TOYAMA Shoji (Gamba Osaka Youth) were placed upfront. 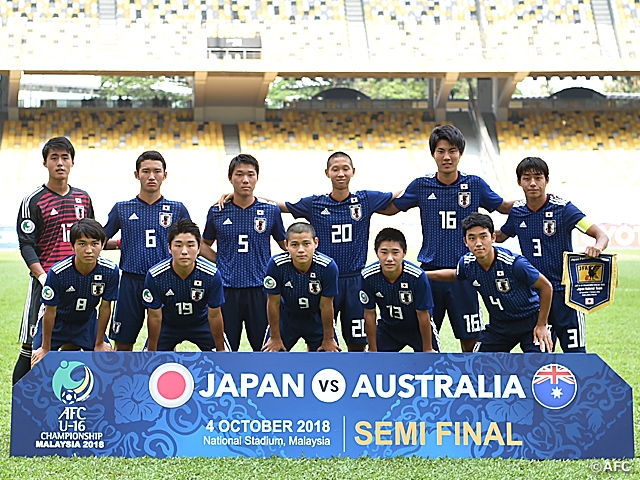 The match started with the Japanese side conceding the goal early. In the eighth minute, their back pass was intercepted, allowing the opponents to penetrate the penalty area. Sako made a sliding effort to stop the opponent, but his challenge was called as a foul, giving a penalty kick to Australia, which they converted calmly to take the early lead.

As Toyama later reflected, “We allowed our opponents to possess the ball a lot more than we expected,” the Australian side used the width of the field effectively to keep their ball movements. Japan tried to force turnovers by applying pressure, but their efforts didn’t prove to be effective. Nakano Keita showed some great individual efforts to produce a goal as he stuck shots in the 24th which was denied by the opposing goalkeeper, followed by a 28th minute shot that struck the goal post.

The match entered halftime with a score of 0-1, but Coach Moriyama later said that he was still confident that, “If we can manage to score a goal back in the second half, we will gain all the momentum.” As he sent out his players by telling them to stay confident and, “Although our opponents took control of the ball possession, they weren’t creating many chances, so we just need to improve on our approach to force turnovers.”

The second half saw the Japanese side taking the initiative, as they forced more turnovers from the Australian side. In the 57th minute, forward NISHIKAWA Jun (Toko Gakuen High School), who entered the match as a substitute, delivered a through ball to Mito to create an opportunity. The long-awaited moment arrived just two minutes later when Toyama capitalised on a through ball sent by Nakano Keita to score the equaliser.

Now with momentum on their side, Japan captured the goal once again in the 69th minute, when they applied aggressive pressure from their front line to force a turnover deep in the opponent’s territory. Nakano Keita delivered the final pass to Toyama, who made a superb turn to free himself up and fired a right footed shot to score the go-ahead goal. Late substitute NAKANO Ryuma (Kyoto Sanga F.C. U-18) assisted Mito to score the third goal in the 78th minute to further extend their lead. 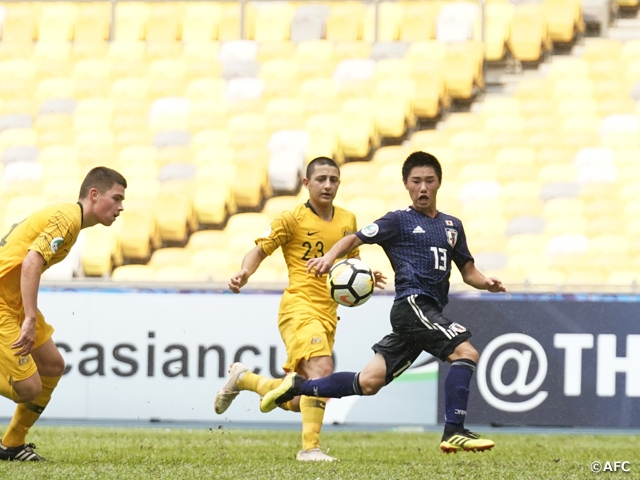 Japan did well to contain Australia’s final push to rally back and won the match 3-1. The team will now face the U-16 Tajikistan National Team in the final, scheduled on Sunday 7 October at 21:45 Japan time. The two teams have faced each other in the group stage where they drew 0-0.

MORIYAMA Yoshiro, Coach (U-16 Japan National Team)
Even though we entered the match by rotating majority of the players, those who hasn’t been getting the playing time as much, has shown a great performance to help lift the team. The match was very tough, especially after we conceded the opening goal. We have managed to utilise every 23 players after this match. It is important to keep in mind that we are given the opportunity to build a team with the help of each player’s clubs, so we must emphasise on giving the chance for them to challenge and develop themselves through these international matches.

GK #12 SASAKI Masato (Kashiwa Reysol U-18)
To be honest, I wanted to save that penalty kick, but other than that, we didn’t allow our opponents to create a major opportunity, so our defence did a great job overall. The team managed to stay composed after we conceded the opening goal. Even though I didn’t face many shots, I was able to showcase my ability in our build ups and my long feeds. I haven’t been able to play in the matches thus far, but I kept preparing myself through our training sessions.

DF #5 ISHIDA Yusuke (Ichiritsu Funabashi High School)
We were told by our coach that our opponents will show their weakness in the final 10, 15 minutes of the first half, but we weren’t able to capitalise on it, so that’s something we must work on. However, it was good that we managed to score back in the second half. Personally, I allowed the opponents to win the one-on-one situations and deliver crosses from my side, so that’s something I must improve on.

MF #13 MITO Shunsuke (JFA Academy Fukushima U18)
I am very happy that I managed to score a goal. The cross was delivered from an open area, so I was anticipating for the ball to come my way. Although we entered the match poorly, we eventually picked up our pace and found ways to exploit the space our opponents were giving us. The Australian side showed great intensity in the first half, but they seemed a little out of gas in the second half, so in hindsight we were able to outrun them.