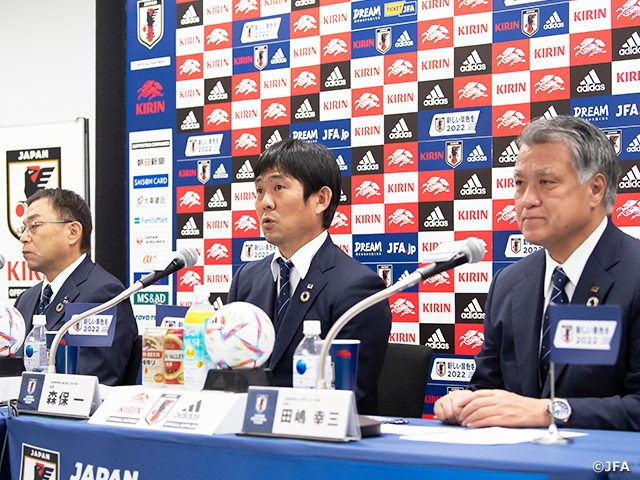 On Thursday 28 April, Japan Football Association (JFA) announced the participating countries of the KIRIN CUP SOCCER 2022, which will take place for the first time in six years. Ahead of November’s FIFA World Cup Qatar 2022™, the SAMURAI BLUE (Japan National Team) will compete in the four-team tournament with Ghana National Team, Tunisia National Team, and Chile National Team. Matches will be played at Noevir Stadium Kobe (Hyogo) on Friday 10 June and Panasonic Stadium Suita (Osaka) on Tuesday 14.

The tournament will serve as a precious opportunity for the SAMURAI BLUE to prepare and strengthen the team ahead of the FIFA World Cup Qatar 2022™, which will take place in November.

In addition to the two African countries who are set to play in the FIFA World Cup Qatar 2022™, South American powerhouse Chile will compete in the Kirin Cup. The SAMURAI BLUE are also set to play in the Kirin Challenge Cup 2022 against the Paraguay National Team on Thursday 2 June (Sapporo Dome, Hokkaido) and the Brazil National Team on Monday 6 (Japan National Stadium, Tokyo) to test their strength against international powerhouses.

The Kirin Cup, which will be held for the first time since 2016, will take place in a four-country knockout format. Japan will play Ghana in their first match on 10 June, with Chile and Tunisia playing in the other match. The winners will play each other in the final and the losers in the third-place match on 14 June.

Japan qualified for their seventh consecutive World Cup at the AFC Asian Qualifiers (Road to Qatar), which ended in March, and are currently ranked 23rd in the FIFA rankings. Ghana are 60th and Tunisia 35th, but both have qualified for the FIFA World Cup Qatar 2022™ by progressing through the African (CAF) Qualifiers. Although Chile did not make it past the South American (CONMEBOL) Qualifiers, they are 28th in the FIFA rankings. Japan hold head-to-head records of four wins and three losses against Ghana, four wins against Tunisia, and a win, a draw, and a loss against Chile.

Opportunities for training matches before the World Cup are limited to these four matches in June, the EAFF E-1 Football Championship in July (which Japan will compete in with a team made up mainly of domestic players), and the FIFA international window in September.

In a press conference held online, head coach MORIYASU Hajime shared his aspiration, “The Kirin Cup will give us the opportunity to play intense matches against some of the world's heavyweights such as Chile, Ghana and Tunisia. We want to play with a purpose and prepare ourselves for the World Cup in Qatar.”

The coach identified three key areas in which he described as “objectives” for the matches in June, namely instilling the team concept, broadening the range of team tactics, and checking the performance of individual players. He also added, “We want to focus on earning results and be able to raise the Cup.”

Coach Moriyasu intends to call up around 30 players for the national team activities in June and says that players playing for clubs abroad who will join the team after their season is over “will be given time off and will be dealt with on an individual basis to ensure they are in good condition.”

Referring to the Kirin Cup match against Argentina at Japan National Stadium in May 1992, when he earned his first cap for the national team as a player, coach Moriyasu described the event as a “turning point experience” for him both as a player and as a coach, where he was able to experience the world standard and mentioned, “I hope that the players will use this experience to build up their careers as players and to achieve results at the World Cup.” 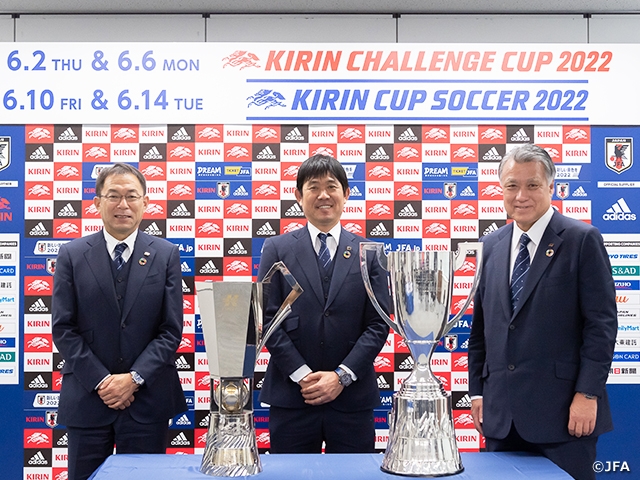 MORIYASU Hajime, Head Coach of SAMURAI BLUE (Japan National Team)
We are grateful for the opportunity to play in the Kirin Cup, which will give us the opportunity to play intense matches against some of the world's heavyweights such as Chile, Ghana and Tunisia. We want to play with a purpose and prepare ourselves for the World Cup in Qatar. We will aim to instil the team concept, broaden the range of team tactics, check the performance of individual players in preparation for the World Cup, while also focusing on the results, so that we can deliver a victory to our supporters and raise the cup. In terms of tactics, we want to challenge ourselves by incorporating several different systems, experiment with more aggressive attacking styles in offence while shielding off the opponent's attacks in defence. While we explore our options, we want to make sure that we have a solid base we can fall back on, as this will increase our chances of winning and allow our players to play to the best of their ability, so we want to make sure that our players are on the same page in terms of tactics.

I personally had a major turning point experience in the Kirin Cup. Playing against Argentina, the Copa America champions at the time, in a packed Japan National Stadium, gave me confidence as a player and allowed me to have a set of standards to compete at the world level. That experience has helped me as a coach as well. I hope that the players will also use this valuable experience to build their careers.

SORIMACHI Yasuharu, JFA Technical Director
We are delighted to be hosting the historic Kirin Cup for the first time in six years. We will support coach Moriyasu to help Japan capture the championship cup in the four-team tournament against Tunisia and Ghana, who are set to play in the World Cup, and South American powerhouse Chile. In response to the coach's request to play against the strongest team possible, we have decided to invite Ghana and Tunisia, both of whom are highly motivated to play a serious match ahead of the World Cup. Although Chile did not make it through the South American qualifiers, they are ranked 28th in the FIFA rankings compared to our 23rd, so we know that they are a strong team. We will continue to do our best to strengthen the team.

TASHIMA Kohzo, JFA President
Kirin Cup football will be held for the first time in six years, since 2016, and we would like to express our sincere gratitude to Kirin Brewery Company, Limited and Kirin Beverage Company, Limited for supporting the tournament as special sponsors. Since the 1970s, when there was no professional league in Japan, the Kirin Cup has provided invaluable development opportunities for the Japan National Team, which had never competed in a World Cup. I myself was able to compete as a member of the Japan National Team in the competition, which was formerly known as the Japan Cup. At that time, the Japan National Team played against club teams, but later it was changed to a competition between national teams, and by gaining experience playing against the world's top countries in the Kirin Cup, Japan has become a country that has now participated in seven consecutive World Cups. In this World Cup we will play Germany, Spain, Costa Rica or New Zealand. It is a great honour and pleasure to play official matches against Germany and Spain, who have won the World Cup multiple times. It is a fitting start to JFA's 101st year. We hope to fight to the best of our ability under the bold leadership of coach Moriyasu. We only have the Kirin Cup and Kirin Challenge Cup in June, and the two matches in September ahead of the World Cup, so we must take advantage of the few opportunities we have in order to prepare and strengthen the team. I hope to see many players giving their best efforts to earn their spot into the roster for the FIFA World Cup Qatar 2022™.