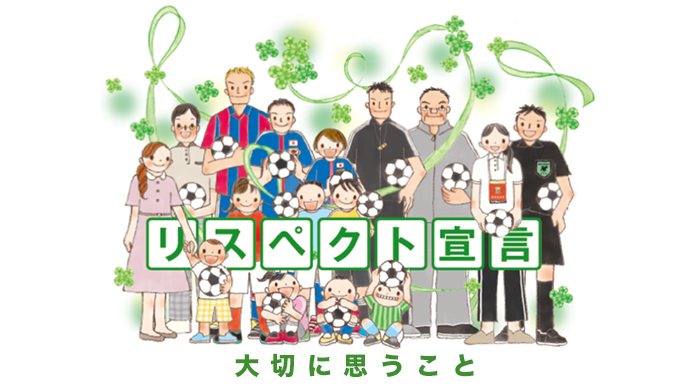 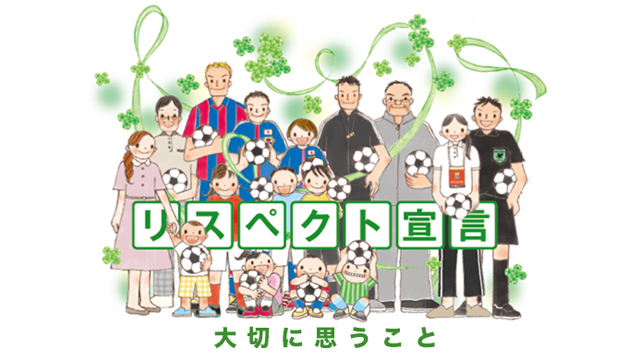 We, Japan Football Association and J-League are strongly aware of the social role played by football and sports, and recognizing the importance of respect in football, since 2008 we are leading "the Respect Project".

We think that the essence of respect is to play doing always the best and we catch it as the basis of fair play. We decided to consider it in relationship with team mates, opponents, referees, coaches, goods, facilities, parents, tournament officials, supporters, competition rules, the spirit of football and all the things surrounding football, and to "treasure" it.

"Aim for a fair and strong Japan team". Respect is a value of which Japan is pride of and it is a value recognized all over the world. It is important to play in Japanese style. That will lead to the increase of the value of football and sports. That is what is exactly needed in contemporary society. Football will be respected by society and it will become culture. We would like to spread these values from football to sport and to Japanese society.

What is Fair play?

JFA Code of conduct in football

JFA is encouraging the active use of the green card in the matches of the (four) categories of children under 12.

Football is a school of life. This fantastic game is not only something enjoyable, but is also something that evokes feelings.
Unhappiness and tears when losing the match, joy and celebration when winning. Football is a teacher. Football gives children the opportunity to learn life's virtues and values.

These values can be applied in everyday life in relationship with the family and the community. Football helps the players to grow physically, socially and psychologically.
Games Everyday, all over the world, myriads of matches are played. Most of them are played for fun. The referee is the person who takes care of the observation of the rules. The referee ensures that the rules are observed and that everyone can enjoy the game. Yellow cards and Red Cards Actually, the referee's duty is to notify the player to what extent his acts are violating the rules, by using the yellow cards and the red cards. These cards are used in order to explain to certain players that their negative behaviours are not fair and to what extent those are not allowed.
The referee shows these cards and tries to be fair with all the 22 players on the field.
Positive education When children are starting playing football, we have to teach them not only the techniques, but also "what they must not do". Sometimes, during trainings and matches, the attention is concentrated on the things that must not be done, but it is necessary to praise and thank children for their good behaviours. This is the concept that lies behind the green card.

The green card has the following meanings :

Green cards are shown in occasion of following behaviours.

JFA is promoting fair play through the active use of the green card.