Close
HOME > Respect and fair play > NEWS > The definition of a “Loser” - Always have respect Vol.105

The definition of a “Loser” - Always have respect Vol.105 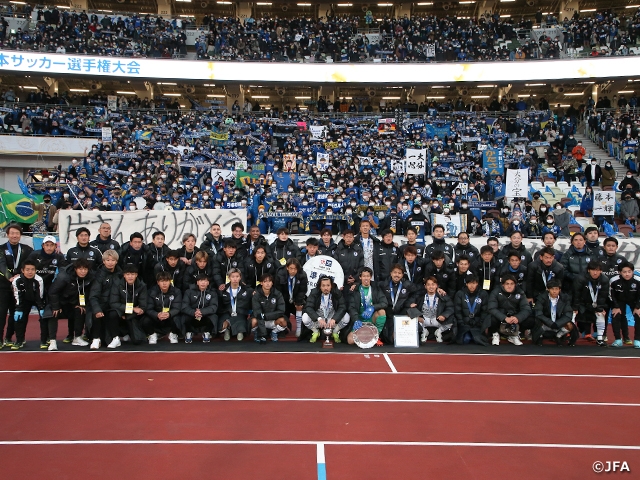 Such a thought crossed my mind after watching the Emperor's Cup JFA 101st Japan Football Championship final, which took place on 19th December of last year.

After conceding an early goal to Urawa Red Diamonds, Oita Trinita finally managed to equalise in the 90th minute. However, it was Urawa who prevailed in the end, as they scored the decisive goal during additional time to close out the match in dramatic fashion.

Following the match, the Oita players, who were awarded the runners-up medals at the awards ceremony, stayed on the freezing pitch for a long time to watch Urawa being crowned as winners. Oita's coach KATANOSAKA Tomohiro, who was set to leave the club after this match, also held his head up and stood tall to congratulate the Urawa players.

In the past, there were teams and players who would immediately remove their runners-up medals out of frustration. We still see a lot of players attend the awards ceremony with folded arms and a disappointed look on their faces.

The dignified demeanour of the Oita players made me wonder what it means to be a loser.

Before the ceremony, shortly after the match, while the stadium was abuzz with “victory interviews” of the Urawa players, coach Katanosaka gathered all of his players on the pitch to give a speech, which was filmed and shared on Twitter by NHK Oita, attracting a great deal of response from the public.

“I want you to remember this disappointment. This is an opportunity that doesn't come along very often, so I want you to make the most of this experience, this situation, and this frustration for the next time. You guys can do it. I know you can do it. Let's be good losers. Let's hold our heads up, be proud of ourselves, and thank our supporters. Without a doubt, this is a good team. I can say that with confidence. What a wonderful pitch. (Looks back at the supporters) Look, they are so great. We have lost today, we have lost the first division status, but that is where we are now. We need to accept that, be good losers, be grateful, go back to Oita together, and prepare for the next step. Well done everybody. Thank you!”

We must not forget the disappointment of losing. But there is no need to be ashamed of a result after doing the best we could. Let’s hold our heads up and be proud of ourselves…

It has been six years since coach Katanosaka took over the helm in 2016. He led the club, which had been relegated to J3 after the 2015 season, back to J2 and then to J1, and after three incredible seasons in Japan's topflight, the club was relegated to J2 at the end of the 2021 season. Shortly afterwards, they defeated J1 champions Kawasaki Frontale in a penalty shoot-out to reach the Emperor's Cup final for the first time in the club's history. During his time with the club, which was full of ups and downs, coach Katanosaka must have stuck to his beliefs and shared them with his players at all times. I think that is why his words were so well received by the players after the final, resulting in their dignified demeanour at the awards ceremony.

On paper, there are indeed winners and losers. And over time, the only thing that may be recorded is who won the title, rather than how it was fought. But in terms of a footballer's career, I think the most important thing is that the player has given his/her best effort to showcase a performance that he/she is not ashamed of.

We all have regrets that make us think, “I should have done this or that.” However, if we knew that we had given our utmost effort at the time, we should be able to take the results in stride.

I believe that only those who can take the results in stride can become what coach Katanosaka describes as “good losers.” In that sense, “good losers” are no longer “losers.”

Teams that cannot accept results, blames the decisions made by the referees or the mistakes made by the players, and criticises each other, are certainly “losers.” However, it was clear to everyone that Oita were not “losers” in the Emperor's Cup final. Even without hearing the words of coach Katanosaka, they were truly outstanding “finalists.”