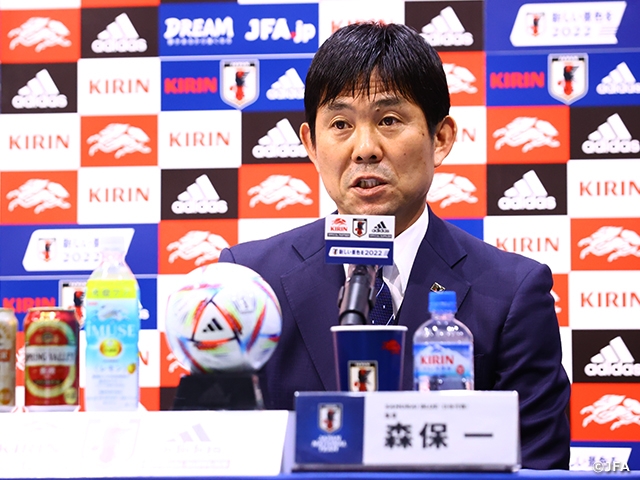 On Friday 20 May, Head Coach MORIYASU Hajime of the SAMURAI BLUE (Japan National Team) announced the squad for the KIRIN CHALLENGE CUP 2022 and KIRIN CUP SOCCER 2022 to be held in June. KAMADA Daichi (Eintracht Frankfurt), FURUHASHI Kyogo (Celtic FC), and DOAN Ritsu (PSV Eindhoven) made their return to the squad, while ITO Hiroki (VfB Stuttgart) was called up for the first time.

With just six months to go until the kick-off of the FIFA World Cup Qatar 2022™ in November, the team will have limited opportunities to prepare for the tournament, including the international match windows in June and September, and the EAFF E-1 Football Championship, which Japan are expected to play with a squad mainly consisting of players from the J.League, making these upcoming four fixtures all the more significant.

At the press conference, coach Moriyasu commented, “We want to make sure to improve ourselves through these four matches. We want to work on instilling our team tactics and broadening our options as we head towards the World Cup.”

The 28-man roster called up for the upcoming matches includes a number of reliable faces making their return to the team.

Kamada, who helped Frankfurt win the UEFA Europa League, Furuhashi and Maeda Daizen, who propelled Celtic top the Scottish Premiership, and Doan, who won the Dutch Cup, are among those called up to the squad. Kamada and Furuhashi have not played for the national team since last November, while Maeda and Doan last played in the AFC Asian Qualification (Road to Qatar) in January and February this year. 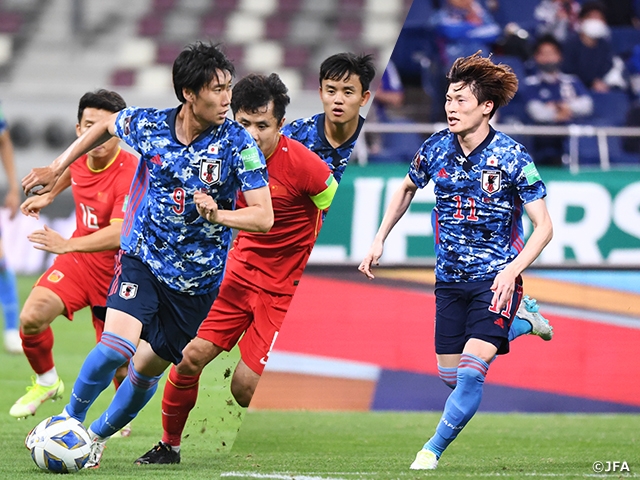 SUGAWARA Yukinari (AZ Alkmaar) also has been playing regularly for his club this season and returns for the first time in almost a year, since the second Asian qualifying round at the end of May last year. Goalkeeper OSAKO Keisuke (Sanfrecce Hiroshima), a member of the Tokyo Olympics squad, will make his return to the SAMURAI BLUE for the first time since the E-1 Football Championship in December 2019. 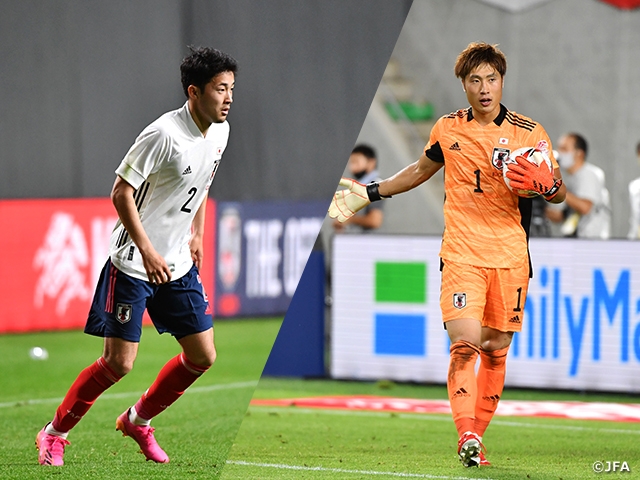 TOMIYASU Takehiro (Arsenal) has also been called up for the first time since November last year and will return to action while monitoring the progress of his injury.

Ito, who has been called up for the first time, made 29 appearances for Stuttgart this season, including the season finale in which he assisted the goal of ENDO Wataru to help the team avoid relegation from the Bundesliga. Under coach Moriyasu, Ito was included in the U-21 Japan National Team in 2018 and has played in the AFC U-23 Asian Cup and the Dubai Cup, as the coach commented on the defender, “His defensive ability has improved dramatically. He has shown his ability to initiate the team's attacks while stopping strong opponents.” 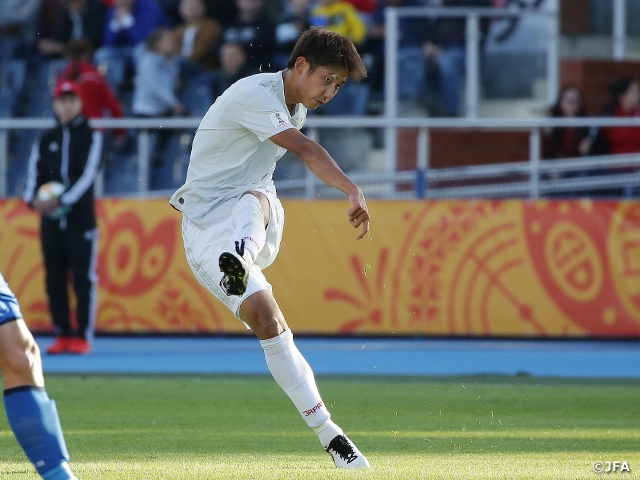 The list of players who have continued to be selected from the series played in March includes ITO Junya (KRC Genk), who scored in four consecutive matches in the Asian qualifiers, MINAMINO Takumi, who helped Liverpool win the FA Cup and League Cup double while scoring the goal that kept their Premier League title hopes alive, MITOMA Kaoru (Royale Union Saint-Gilloise), who scored twice in the qualifier against Australia in March, and UEDA Ayase (Kashima Antlers), who has scored a league-leading eight goals in the J1, TANAKA Ao (Fortuna Dusseldorf), Endo, and YOSHIDA Maya (UC Sampdoria).

“First of all, we want to build on the foundation we have established thus far and make it stronger, so that we can demonstrate the team concept more effectively. Then, we want to take on new challenges,” said coach Moriyasu.

The team will start training on Monday 30 May to prepare for the matches.

MORIYASU Hajime, Head Coach of SAMURAI BLUE (Japan National Team)
I would like to express my gratitude for the opportunity to play against the world's best in the KIRIN CHALLENGE CUP and KIRIN CUP SOCCER. In these four matches that will prepare us for the World Cup, we will focus on winning each match so that we can improve ourselves both as a team and as individuals. We will give our utmost effort in each match to please our fans and supporters.

We have made some changes to our squad, and it has been a while since our last activity in March, so we want to build on the foundation we have established thus far and make it stronger, so that we can demonstrate the team concept more effectively. Then, we want to take on new challenges. Without a solid base to fall back on, we will not be able to show our strength. If we can maximise the individual strengths of our players and the strength of the Japan National Team, we will be able to compete against any opponent with confidence.

Kamada and Doan have shown great performances and have made their presence felt at their respective clubs. The confidence that comes with winning a title will definitely build on their strengths and I expect them to show even more ambition and hunger. Both Sugawara and Osako (Keisuke) were also called up because of their good performances.

As for OSAKO Yuya, I am told that his condition is not 100% yet. He has led the national team for a long time and it's a pity that he can't play with us, but his absence provides opportunities for various other players and a chance for the team to raise the overall strength. I hope that the player who replaces him will play to his full potential and become a viable option for the team. I see this as a positive opportunity to raise the overall level and to broaden the options of the team, so I am looking forward to seeing which players will step up and make a case for themselves.

SORIMACHI Yasuharu, JFA Technical Director
With only six months to go before the World Cup, we are now at the stage where we need to work backwards to see how we can prepare for the tournament. The four matches against Paraguay, Brazil, Ghana and either Chile or Tunisia, which will be played during this international match period, will be the most important matches in terms of the team's development, so we must prepare the team in the best way possible ahead of 2 June. We chose this timing to announce the squad because the season for European leagues are coming to an end and we thought that we could speed up the preparation process by announcing the squad early. Due to the current state of the Corona pandemic, cheering out loud may still be prohibited, but there will be no restrictions imposed to attend the match. We hope that many people will come to the stadium or watch the match on TV to support the SAMURAI BLUE. 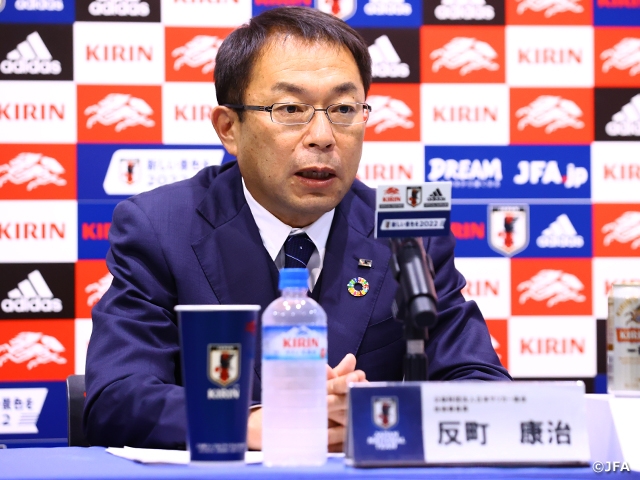