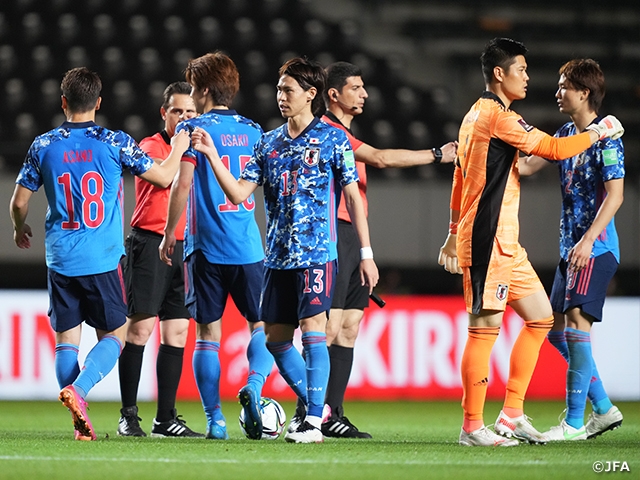 On Friday 28 May, the SAMURAI BLUE (Japan National Team) faced the Myanmar National Team in the second round of the Asian qualifiers for the FIFA World Cup Qatar 2022™. With OSAKO Yuya (Werder Bremen) scoring five goals and MINAMINO Takumi (Southampton FC) extending his goal streak to six consecutive qualification matches, Group F leader Japan defeated Myanmar 10-0 at Fukuda Denshi Arena, Chiba. As a result, Japan has clinched their spot into the final round with two matches left to play in the second round.

With the match being played outside of the international match day set by FIFA, Japan entered with a squad consisting only those players playing for clubs abroad. GK KAWASHIMA Eiji (RC Strasbourg) was given his first start in this qualifier, while ITAKURA Kou (FC Groningen) and YOSHIDA Maya (U.C. Sampdoria) were paired as the centre halves for the first time. Two players who played for Olympique de Marseille this season, NAGATOMO Yuto and SAKAI Hiroki, were placed as fullbacks, with MORITA Hidemasa (CD Santa Clara) and ENDO Wataru (VfB Stuttgart) playing as the defensive midfielders.

Myanmar, who entered the match in fourth place of Group F, has a chance of advancing to the final round of the World Cup qualifiers and the third round of the AFC Asian Cup China 2023 qualifiers, if they can win at least two of their remaining matches. In efforts to keep their hopes alive, the Southeast Asian side started the match by setting a block in the centre of the field while anticipating for their opportunities to counter Japan. However, it did not take long until the Japanese offence led by Osako, KAMADA Daichi (Eintracht Frankfurt), Minamino, and ITO Junya (KRC Genk) to solve the opposing defence, as Minamino scored the opening goal in the eighth minute, extending his goal streak to six matches at this qualifier. 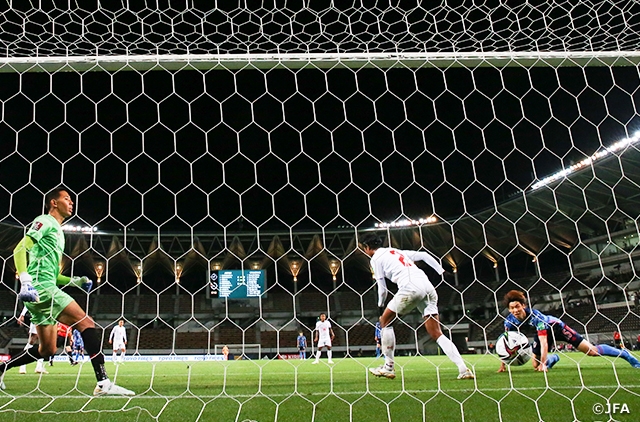 Following the opening goal scored by Minamino, Osako went onto score three consecutive goals within the first half. His first goal came in the 22nd minute, when he converted a cross delivered by Nagatomo to strike a header into the net. After converting a PK in the 30th minute, the Japanese striker responded to a header of Nagatomo in the 36th minute to mark his second straight hat-trick at this qualifier.

Still carrying the momentum from the first half, Osako scored his fourth goal of the match in the fourth minute of the second half. Morita converted a cross sent by MUROYA Sei (Hannover 96) in the 56th minute, followed by Minamino’s second goal of the match scored in the 66th minute.

Japan shifted to a 4-1-4-1 formation after HARAGUCHI Genki (Hannover 96) was introduced in the 62nd minute and continued to dominate the ball possession. Kamada capitalised on a cross sent by Muroya in the 84th minute, followed by Osako’s fifth goal of the match scored in the 88th minute. Itakura converted a FK delivered by Minamino in additional time to cap off the match, as Japan walked away with a 10-0 victory.

With this win, Japan has now won all six matches in Group F, clinching their spot into the final round with two matches left to play (Tajikistan on 7 June and Kyrgyz Republic on 15 June). Myanmar remains in fourth place and still have a chance of advancing through if they can win their remaining two matches.

The SAMURAI BLUE is scheduled to face Jamaica National Team in the KIRIN CHALLENGE CUP 2021 at Sapporo on Thursday 3 June.

MORIYASU Hajime, Coach of SAMURAI BLUE (Japan National Team)
We were a win away from advancing through the second round, so we entered the match with the intention to showcase a strong performance that can bring excitement to our supporters. Our players played hard until the final whistle, which led to this positive result. During the match, we shifted our formation from 4-2-3-1 to 4-1-4-1, and although there were stints where we struggled to break through the opposing defence line, the players continued to showcase a strong attitude to push forward and continued to challenge themselves on the pitch. I have great hopes that today’s performance can lead to the team’s overall growth in the future.

Despite advancing through the second round, we must not sit on our laurels. We were simply the better team in the group, so we must brace ourselves ahead of the upcoming competition. However, regardless of who we face, it is not an easy task to keep a clean sheet and win with conviction. The players have worked extremely hard in each match, and I am proud of them for setting a high bar and playing with determination to reach a higher goal.

In terms of strategies, we were able to try out our 4-2-3-1 and 4-1-4-1 formations, which allows us to broaden our option in future matches. We also managed to manufacture goals from our fast breaks and slow build-up plays, as our players constantly worked together to get themselves on the same page. We are expecting higher competitions at the final round, which requires us to play with a higher intensity level, but the fact that we were able to manage the risks against opponents who were dropping deep and anticipating for their opportunities to counter us, should help us in the future matches. We were also able to showcase quick transitions between offence and defence, which is a key component of this team. Our players continued to showcase quick transitions despite grabbing a commanding lead in today’s match, which is a positive sign as we make our way into the next stage.

FW #15 OSAKO Yuya (Werder Bremen)
I entered the match with the intention to score as many goals as possible. I am thankful for my teammates for providing me great passes. We focused on keeping our aggression against opponents who are dropping deep, and we hope we can showcase the same performance at the final round. Since our match against Korea Republic, I have been building a positive relationship with Kamada and Minamino. Ito has also provided us with great speed down the line, so I feel like we have found a great balance in our offence. We are looking forward to showcasing another strong performance in our next match against Jamaica.

MF #10 MINAMINO Takumi (Southampton FC)
It was important that we score early in today’s match, and I was determined to get myself involved in scoring the opening goal, so I am glad I was able to score that goal. It was also great to see our side keeping the aggression throughout the entire match. We knew that Myanmar would play differently against us, so we had to make the adjustments as we played the match. We were able to create opportunities when Kamada and I were given space in the middle, and we reminded each other that we can add more layers to our offence by utilising the width of the field. Being able to deploy two systems can be a huge advantage, but it doesn’t mean a thing if we can’t utilise it against strong opponents, so we must polish up on our strategies and have them available for the final round. 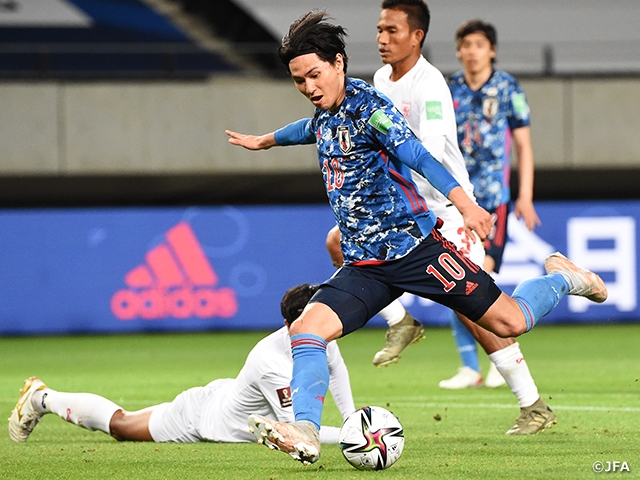 DF #22 YOSHIDA Maya (U.C. Sampdoria)
It feels great to clinch the final round, and it was great to see our side score plenty of goals while maintaining the intensity level throughout the match. It is important that we continue to showcase this kind of performance in the remaining two matches. Similar to our match against Mongolia, our opponent played deep in their territory, so we had to be creative and utilise the width of the field to break down their defence. It was also great to see us manage the risks by eliminating the opponent’s opportunities to counter us.

GK #1 KAWASHIMA Eiji (RC Strasbourg)
Any match with the national team is special, and I feel very fortunate to be a part of the team’s victory. My minutes maybe limited, but I am always prepared to help the team when I am needed. I want to utilise my experience to support the team, so I am grateful to be given the opportunity to play. I would like to provide positive influence on the team in any shape or form. The fact that we managed to score double digits in back to back matches should give us great confidence moving forward, but we must heighten the quality of our plays as we enter the final round. We must aim for higher standards in both offence and defence.

MF #20 ITAKURA Kou (FC Groningen)
I was confident in my ability to score goals, so when Minamino delivered a perfect ball towards me, I just focused on converting the opportunity, and I am thrilled to score that goal. It was also great to see our side showcase a strong performance throughout the match. We entered the match with the intention to keep a clean sheet and once we saw our opponent drop deep in their territory, I knew I would have a chance to push forward and get myself involved in our offence. I still felt the need to improve my passing skills to provide better passes to our attackers.

Antoine HEY, Coach of Myanmar National Team
We entered the match knowing that Japan is a superior team, so this is not a surprising result. Our players did what they can, and this was a great learning experience for them. Facing the No.1 team in Asia is not an easy task, especially when it is your first match played in seven months, but we were able to get by it. Despite the lopsided score, this was a precious learning experience for us. Our goal is to advance through the third round of the AFC Asian Cup, which requires us to finish in second place in our group while making it into the top four teams among the other second place teams. That is why we must heighten our motivation and focus to win the remaining two matches.