Regarding the A-Pro Licence

The “Associate-Pro (A-Pro) Licence” is a coaching licence temporarily instituted in 2020. The licence is targeted for female coaches and follows the criteria of the AFC-Pro coaching diploma. Licence holders will be eligible to coach at the WE League. The objective and details of this licence are as follows.

To realise a sustainable growth of women’s football in Japan

・In order to limit the number of players leaving the sport due to lack of playing time, an “ALL JFA” approach must be taken to spread the promotional measures carried out by the JFA women's committee
・In order to allow girls/women to enjoy football for a long time and to increase girls/women fans, environments must be provided where girls/women can continuously enjoy playing football

2. Develop leaders of the next generation

・Licence holders will not only be eligible to coach at the WE League, but they will be developed into role models for the next generation of coaches
・Developing coaches that can thrive at the international level

Setting up new measures
As a licence categorised just beneath the class S licence, the“Associate-Pro (A-Pro) Licence” will be “temporarily” instituted to open new paths for female coaches

Sustainable growth for not just women’s football, but for the entire Japanese football community

To develop/train individuals who can coach professional teams/players at the WE League and become leading figures in the international women’s coaching scene.

▼ In the past
Because of the short history of women’s football, despite having great potential many female coaches lack sufficient experience, which makes it hard for them to fulfil the requirements to apply for the current S-licence coaching course
⇒Rough gemstones
○ “The level of Japanese female coaches (at least their potential) is not low”
○ “There are instructors who can bring out their potentials at the S-licence coaching course” 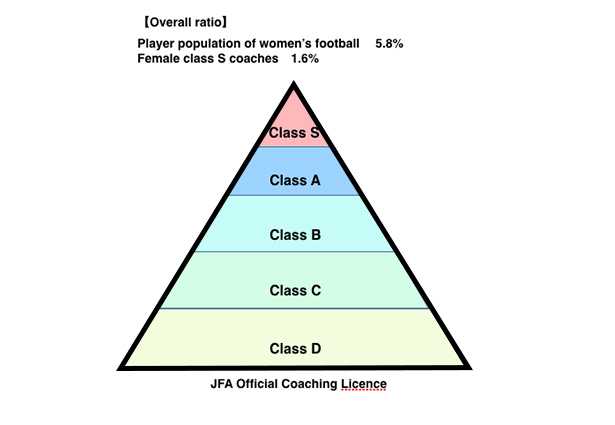 In order to open new paths for female coaches and with hopes to vitalise the entire Japanese football community, the “Associate-Pro (A-Pro) Licence” will be temporarily instituted as a coaching licence categorised just beneath the class S licence

After gaining sufficient coaching experience, A-Pro licence holders may take part in the JFA S-licence conversion course. Once passing the entire curriculum, the JFA class S licence will be certified. 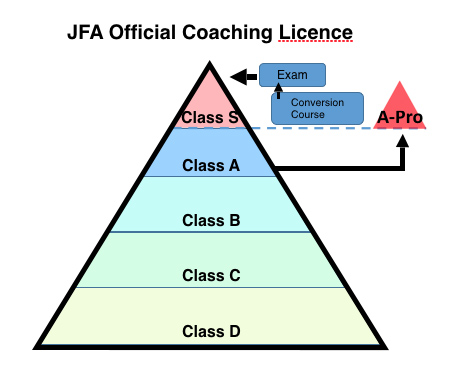 ＜Qualifications＞ *In case of 2020
A coach with more than a year of coaching experience and fulfils at least one of the following.
*It is desirable to have coaching experience for teams at the youth level or higher
① Has a valid JFA Class A Coach General Licence
② Has a valid UEFA A Licence, AFC 'A' Coaching Certificate, or an equivalent licence
③ Has obtained an overall grade of S rank at the 2019 Class A Coach General Coaching Course and has played in more than 20 international A matches and over 200 official matches at the Nadeshiko League
④ Has participated in the 2020 refresher course for female coaches

●Reality Based Learning
➡ Courses based on real life match situations