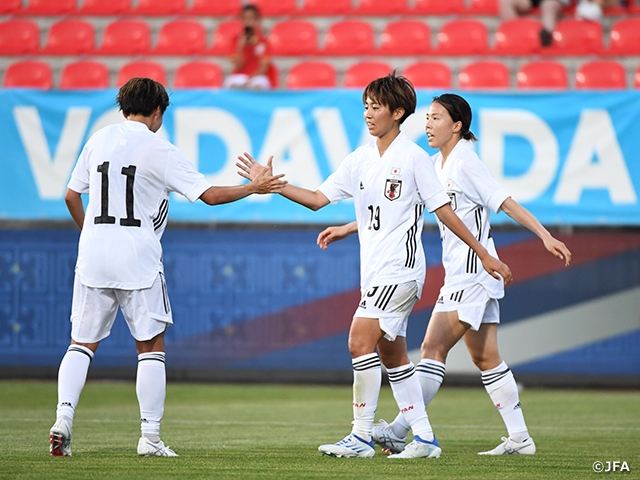 Since arriving in Serbia on Tuesday 21 June, the team had been training under the scorching heat, but showed great energy to start the match, as they applied aggressive pressure to win the ball. With the two attackers, TANAKA Mina and UEKI Riko, initiating the pressure, HASEGAWA Yui and SUGITA Hina followed to apply pressure from the flanks.

Japan’s high-pressing approach turned out to be affective, as seen in the play created in the seventh minute, when HAYASHI Honoka forced a turnover in the opposing end before sending a pass to Hasegawa, who delivered a through ball to setup the shot of Tanaka. In the 23rd minute, SHIMIZU Risa, Tanaka, and Hasegawa worked in tandem to connect passes before Shimizu delivered a cross to Sugita, but the midfielder’s header went wind of the target.

Following a few close opportunities, Japan scored the opening goal in the 28th minute, when Ueki got to the end of an early cross sent by Shimizu, striking a well-placed header that found the back of the net. 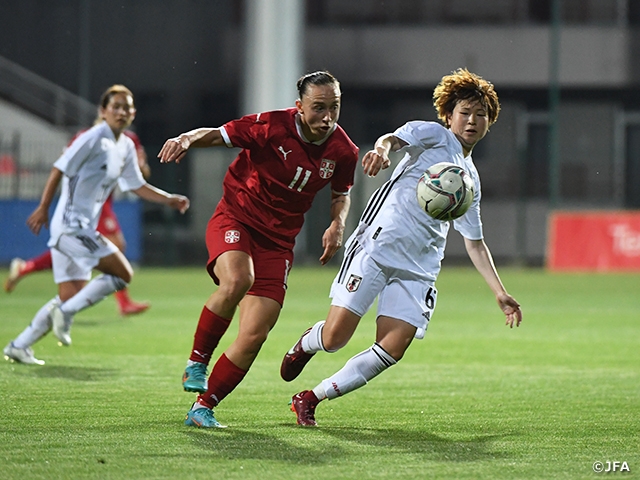 Serbia started to rally back in the second half, threatening the Japanese goal through number of set-pieces, but the Japanese defence showed great composure to defect these attempts. Despite giving up the initiative to the home side in the early minutes of the second half, Japan managed to score the second goal just past the hour mark, when MIYAZAWA Hinata, who entered the match moments before this play, delivered a pin-point cross that was converted by NAOMOTO Hikaru, who was brought to the pitch alongside Miyazawa.

Gaining momentum from her assist, Miyazawa responded to a through ball sent by NAGANO Fuka in the 76th minute and carried the ball into the box before piercing a shot through the near side to further extend the Japanese lead. 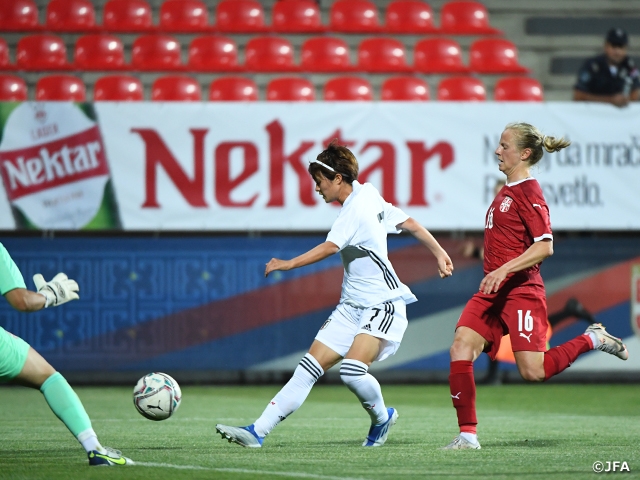 The substitutes played a key role in this match, as CHIBA Remina, who was introduced in the 78th minute, made a sliding effort to convert the cross of Hasegawa in the 82nd minute, marking her first goal in her first international cap. After NARUMIYA Yui added another goal to the tally, Japan earned a 5-0 shutout victory over Serbia.

The Nadeshiko Japan will now travel to Helsinki to face the Finland Women’s National Team on Monday 27 June. 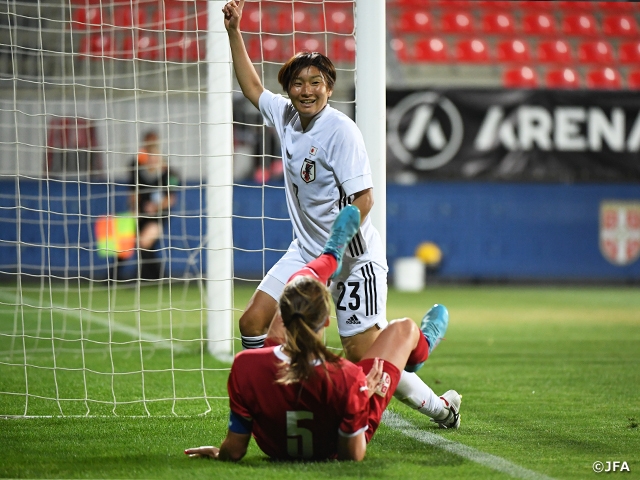 IKEDA Futoshi, Coach of Nadeshiko Japan (Japan Women’s National Team)
Although we had a limited time to prepare for this match, the players showed great discipline and we were able to demonstrate our aim of aggressively applying pressure from the frontline throughout the entire 90 minutes. I told them during halftime that we should try to spread the field more, because we were getting bunched up in the middle. The players played their roles well, and the fact that several players were able to get on the scoresheet is a positive thing we can take away from this match.

DF #4 KUMAGAI Saki (FC Bayern Munich/Germany)
The coach had suggested that we need to step up the pressure from our base 4-4-2 defence, and we were all talking about how we would have to make mistakes to make this work. There were some errors, but I think it led to a positive challenge overall. I moved up to play as a defensive midfielder towards the end, and I knew that my job was to stop the opponents and to win the ball in the midfield.

MF #7 MIYAZAWA Hinata (Mynavi Sendai Ladies)
We play on the same team, so I knew I could trust Nagano to deliver the ball when I make the run upfront, and that was exactly what happened. I was surrounded by the opposing defenders, but I was able to break loose with my first touch and keep my cool facing the goalkeeper. I am glad that I was able to score and assist a goal, but I will not rest on my laurels and will continue to prepare for our next match.

FW #23 CHIBA Remina (JEF United Ichihara Chiba Ladies)
I was extremely happy when I scored the goal. Hasegawa delivered a great cross, so I just had to make contact with the ball. The cross took a deflection off the goalkeeper, but I was committed to converting that delivery. I entered this match with the intention to display my strengths, which are my abilities to make runs into the open space, win physical battles, and control the loose balls. This match reminded me that I still have some work to do on how to compete against taller opponents with longer legs, so I want to make the most of this experience to improve my game for the next time.