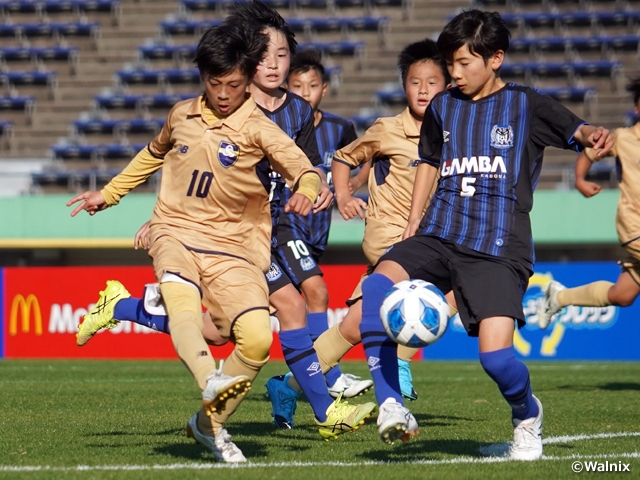 The quarterfinals and semi-finals of the JFA 44th U-12 Japan Football Championship took place at Kagoshima on Monday 28 December.

The first quarterfinal match featured a match between Fukuoka West Football Academy (Fukuoka) and Gamba Osaka Kadoma Junior Youth (Osaka). The match started off with Fukuoka scoring the opener in the fourth minute, when FUKUSHIGE Kosuke converted the cross of HARADA Rentaro. Despite conceding the opening goal, Osaka kept their composure and attacked the flanks to produce chances. The equaliser came in the 12th minute when NAKANO Rui responded to a through ball and slotted the ball into the Fukuoka goal. With momentum on their side, Osaka went onto convert a FK to take the win and advance to the semi-finals. 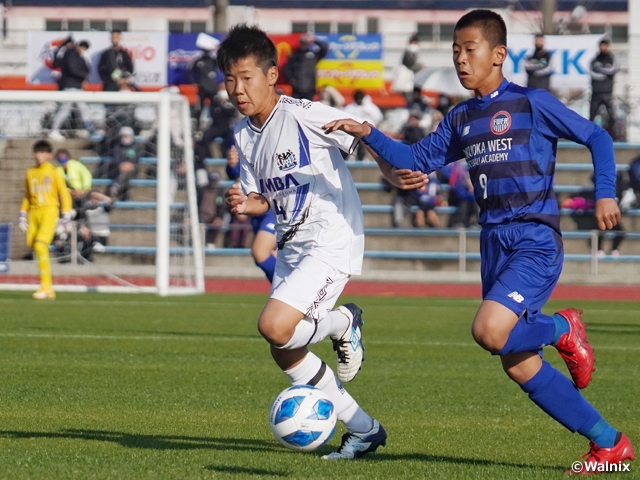 The defending champion Buddy SC (Kanagawa) squared off against JEF United Chiba U-12 (Chiba) at the quarterfinals. Despite conceding two goals in the first half, Buddy managed to come from behind and score two goals in the closing minutes of the second half. However, it was the Chiba side who prevailed in PKs, as they advanced to the semi-finals.

JEF United Chiba U-12 faced another close match at the semi-finals when they faced Yokohama F. Marinos Primary (Kanagawa2). Although it was the Yokohama side who created more attacking threats, Chiba showcased great composure to keep the score-line tied. With the match entering overtime, Chiba’s OSHIMOTO Daiya responded to a through ball and calmy converted the opportunity to send Chiba into the tournament final. 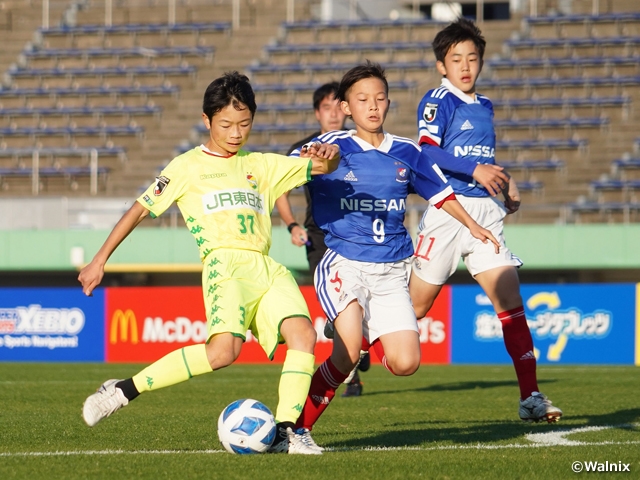 On the other side of the bracket, FC Trianello Machida (Tokyo) defeated Kashima Antlers Junior (Ibaraki) 2-1 at the quarterfinals, before facing Gamba Osaka Kadoma Junior Youth at the semi-finals.

Ahead of the match, Machida’s coach WAKAYAMA Seisuke reminded his players, “Don’t be afraid of holding the ball and try to have fun on the pitch.” The players responded to the coach’s words, as the Tokyo side showcased great creativity to carry the ball into the attacking third. In the sixth minute, YOKKA Hiromu scored the opening goal with a spectacular lobbing shot. With KUDO Atsushi adding onto the tally in the second half, Machida scored three goals to advance to the final.

As a result, JEF United Chiba U-12 and FC Trianello Machida will face each other at the final scheduled to be played at Shiranami Stadium. The fixture between two tournament debutants will kick off at 9:30 a.m. on Tuesday 29 December.

ONO Ren (Fukuoka West Football Academy/Fukuoka)
We knew that our opponent at the quarterfinals was stronger than us, so we tried to play with patience, but it turned out to be a disappointing result. Although we managed to enter the match strong, we were overwhelmed by our opponent as the match progressed. Our goal was to win the national title, and with everyone’s effort, we were able to make it this far. It wasn’t the best result, but we will go home with our heads held high.

NOGUCHI Rento (Sorriso Kumamoto U-12/Kumamoto)
We played well in the first half, but we told each other during halftime that we needed to play more aggressively in the second half. Our team is capable of working hard and we have a lot of fun together. My strengths lie on my ability to use my teammates and score goals. This tournament has allowed us to realise that we can compete at the national level, so we hope to utilise this experience to become a better team.

OSHIMOTO Daiya (JEF United Chiba U-12/Chiba)
I always visualise where I want to take a shot before executing the shot. After entering PKs at the quarterfinal match against Buddy, we didn’t want the semi-final to enter PK too, so we played to win the match in overtime. I was able to take the shot just as I envisioned. I hope to carry this momentum to score more goals at the final. I will focus on applying pressure from the frontline and try to take the initiative in our next match.

HATTORI Kazuya, Coach (Gamba Osaka Kadoma Junior Youth/Osaka)
We were not able to win the second balls and allowed our opponent to take the initiative at the semi-finals. It felt like we were always a step behind. We were allowing our opponent to possess the ball too much, so we had to apply quicker pressure. Although we tried to make adjustments in the second half, our players might have been a bit too tired. We have a prefectural match coming up, so we will get back on our horses and work ahead of that match.