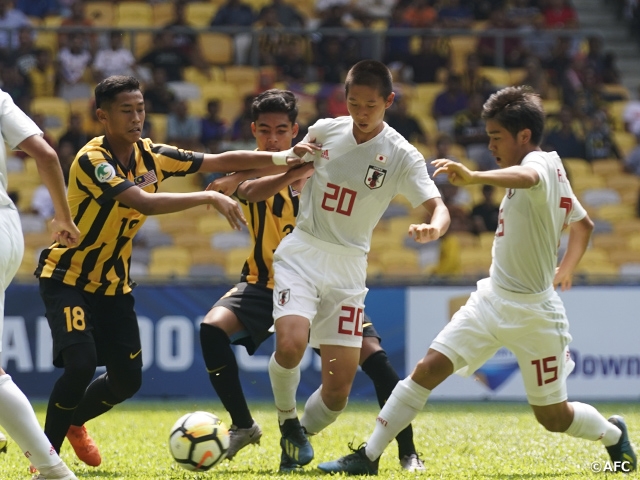 On Thursday 27 September, the U-16 Japan National Team won their third group stage match 2-0 against the U-16 Malaysia National Team to advance to the knockout stage of the AFC U-16 Championship Malaysia 2018 as group leaders.

Coach MORIYAMA Yoshiro has mentioned prior to the tournament that it will require a total team effort to do well at this tournament. He stayed true to his words as eight players were rotated from the starting line-up of the second match, as the newly named line-up featured YAMADA Taiki (Kashima Antlers Youth) in goal along with SUMI Kohshiro (FC Tokyo U-18), SUZUKI Kaito (Jubilo Iwata U-18), NAKANO Shinya (Sagan Tosu U-15), NARUOKA Hikaru (Shimizu S-Pulse Youth), NAKANO Ryuma (Kyoto Sanga F.C. U-18), NISHIKAWA Jun (Toko Gakuen High School), and TOYAMA Shoji (Gamba Osaka Youth).

The match was originally scheduled to take place on Wednesday 26 September with a kick-off time of 16:30 local time, but the match was postponed due to heavy thunder storm, pushing the kick-off time to 11:00 on Wednesday 26. Coach Moriyama later shared that the team had prepared themselves to peek at the original match date, so the sudden change in schedule had left a great impact on both physical and mental status. However, the coach stayed positive as he stated that “These hardships are part of the challenges we face at the development categories. We must learn to overcome these challenges.”

Before this match, Japan had won and tied a match apiece, while Malaysia had won and lost a match apiece. Taking in these results in consideration, the match was expected to be a heated battle, as the Malaysian side couldn’t afford to lose another match. Just as anticipated, the host team showed great aggression in their attacks to respond to the local fans cheering for them. With many talented players featured in the opponent’s squad, the Japanese goal was threatened numbers of times, but the team managed to showcase great persistence to hold off Malaysia from scoring the goal.

Japan gradually picked up their pace as they got used to the match atmosphere and saw the Malaysian attack simmer down. The opening goal came in the 37th minute, when Naruoka penetrated the left flank before sending a cross towards the middle. The ball was once deflected by the opposing defender, but midfielder YOKOKAWA Asahi (Shonan Bellmare U-18) was able to get a touch on the loose ball, allowing Toyama to get to the end of the ball and strike the ball into the net. 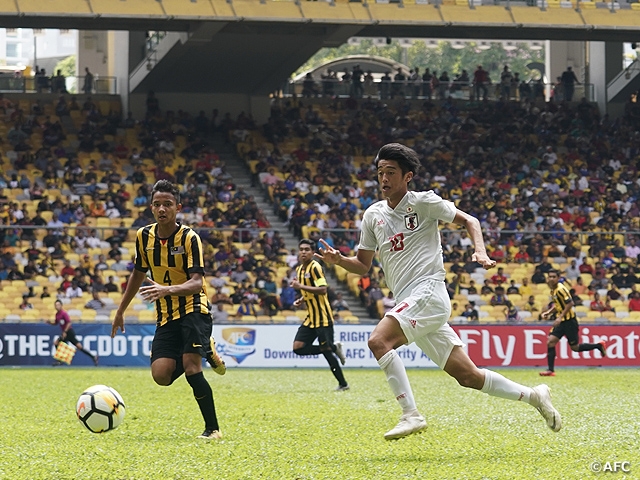 With a goal lead, the Japanese side kept their composure in the second half, keeping their plays simple to avoid taking any unnecessary risks. The scorching weather has shed the momentum off the Malaysian side, while the Japanese side still looked fresh, as they have been rotating their line-ups over the group stage. Japan took advantage of their mobility towards the end of the match as Naruoka scored a superb shot from distance to extend their lead to 2-0. With this victory, Japan secured the top spot of the league to advance to the next round with a record of two wins and a loss.

The quarterfinal match against the U-16 Oman National Team will take place on Sunday 30 at 17:30. A win in this match will give Japan a spot into next year’s FIFA U-17 World Cup Peru 2019.

MORIYAMA Yoshiro, Coach (U-16 Japan National Team)
With the match being postponed for a day, we were forced to play under this hot weather during the daytime. In addition, the Malaysian supporters created an away atmosphere for us, making this match the toughest match of the group stage. The opposing forwards and wings showed great speed and it was very difficult to respond to them. However, we managed to stay patient and keep our composure against the opponent’s counter attacks. The fact that we were able to contain our opponents at the final third brought us the win today.

MF #6 YOKOKAWA Asahi (Shonan Bellmare U-18)
I think we were a bit overwhelmed by the away atmosphere at the beginning of the match. I made some mistakes and our opponents created many opportunities against us, but we still managed to keep a clean sheet. There were stints where I felt very confident that we weren’t going to concede any goals today. In the closing minutes of the match, we stayed vocal and did a great job on managing the risks. Earning this victory under a complete away atmosphere has given us great confidence moving forward.

MF #8 NARUOKA Hikaru (Shimizu S-Pulse Youth)
Today I was positioned more in the central, rather than my usual position in the flanks, but I didn’t have much problem playing there. We have faced Malaysia in the earlier qualification rounds and we had the impression that they will make many individual efforts in their attacks, so we kept that in mind to defend against them. We were also aware that they are capable of initiating strong counter attacks, so we had to be really careful on how we lose the ball. In the scene where I scored the goal, I elected to pass the ball in a similar situation before, so when I was given another chance, I was committed to strike a shot.

FW #20 TOYAMA Shoji (Gamba Osaka Youth)
This was my first time playing with so many spectators, and it was overwhelming at first, but I gradually got used to it. I managed to keep my composure when I scored the goal and I was very happy when the ball went in. With the match schedule getting postponed, it was a very difficult match, but we managed to cope with it. I hope we can win our next match, make a deep run into the tournament, and take the title. 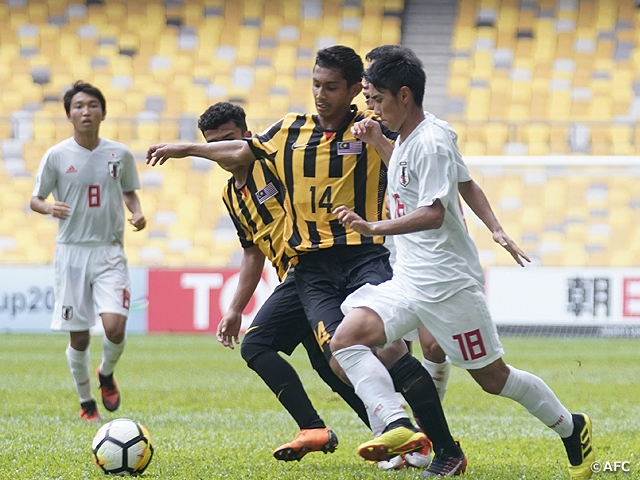