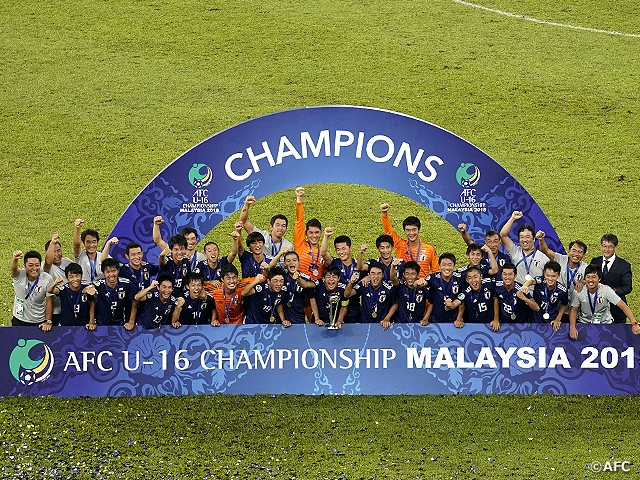 On Sunday 7 October, the U-16 Japan National Team faced the U-16 Tajikistan National Team at the final of AFC U-16 Championship Malaysia 2018 and won the match 1-0 to earn their third overall title, which was their first time in 12 years.

The match opened up in an unexpected fashion. Coach MORIYAMA Yoshiro described their opponents prior to the match, “A team that emphasis greatly on their defence, with six defenders playing at the back line.” However, Tajikistan came out applying aggressive pressure from their front line, taking Japan off guards. As Handa later reflected, “We were anticipating our opponents to come out in a more defensive approach,” the Japanese side struggled against the high-pressure exerted by the Tajikistani side.

With heavy rain pouring down prior to the match, the pitch condition has made it difficult for the Japanese players to move the ball around. While Japan struggled to pick up their pace, Tajikistan created a one-on-one situation in the 24th minute, but goalkeeper Nozawa came out to make a huge save. Nozawa subsequently made another big save against a shot taken following a corner kick. Coach Moriyama reflected after the match, “That save was a major turning point for us in this match.” 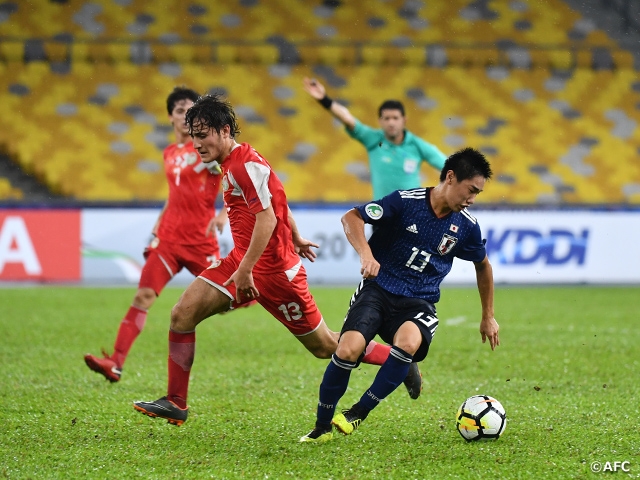 During halftime, Japan made a few adjustments in their offence. Sumi was placed in a higher position, while Nakano Keita played in the offensive midfield role to break down the Tajikistan defence line. In efforts to strengthen their offence, NAKANO Ryuma (Kyoto Sanga F.C. U-18) was brought in on the 54th minute, and their long-awaited goal came in the 68th minute.

Nishikawa delivered the ball to Nakano Keita who dribbled up the field and launched a shot. This shot was blocked by the opposing defender, but Nakano Ryuma was able to collect the loose ball at the left flank and delivered a cross towards the centre. Nishikawa was there to connect with this delivery, as he mentioned after the match, “I just focused on making contact with the ball,” he converted this chance with a volley shot to give Japan the opening goal. 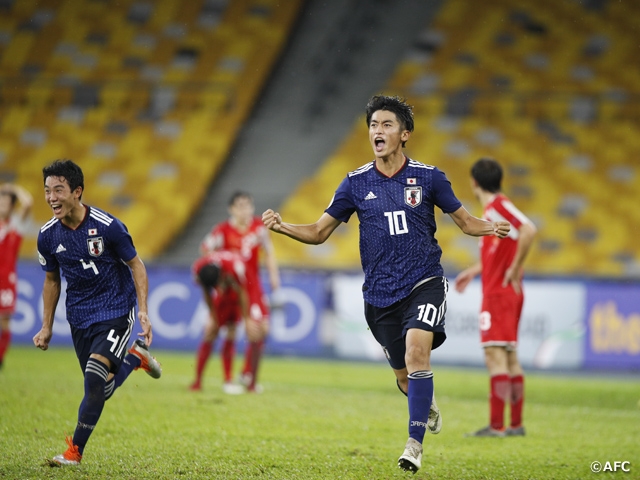 Tajikistan showed great efforts to rally back but led by the two centre halves Handa and Suzuki, Japan managed to keep a clean sheet and win the match 1-0. With this victory, Japan has earned their third overall U-16 Asian Title, which was their first time in 12 years.

Coach Moriyama praised his players, “They have shown great improvements in each and every match they’ve played to reach the pinnacle of Asia. I have greatly enjoyed the past month, as I was given the opportunity to watch the players improve in first hand.” The coach continued by stating, “We will now prepare ahead of the World Cup,” aiming towards the FIFA U-17 World Cup to be held next year in Peru.

MORIYAMA Yoshiro, Coach (U-16 Japan National Team)
We were expecting Tajikistan to take a defensive approach, but we were wrong. Our opponents had many spectacular players upfront and it made it a very difficult match for us. However, our defence did a marvellous job to respond to the opponent’s attacks. They showed great efforts to win the ball in the air as well. The fact that we managed to maintain our conditions throughout the tournament could have been one of the big reasons we managed to win the title. It couldn’t have made possible without the efforts made by our staffs.

GK #23 NOZAWA Taishi Brandon (FC Tokyo U-18)
Compared to the quarterfinals where we couldn’t afford to lose the match, we were able to enter the final without much pressure. Goalkeeper Coach TAKAKUWA Daijiro, just told me to perform as usual, without mentioning of the fact that this is the final of the tournament. So, I just focused on playing my usual game. (Regarding the big save made in the 24th minute) I was just committed to make a save.

DF #3 HANDA Riku (Montedio Yamagata Youth)
We knew Tajikistan were capable of scoring from a counter attack, so we focused on that. They were much more aggressive than our last encounter in the group stage. I feel like I haven’t been able to contribute to the team as much, and this title was earned by my teammates. I am so grateful for our coach as well. I felt the team was bonding together and got stronger as we spent more time together in Malaysia.

MF #15 NAKANO Ryuma (Kyoto Sanga F.C. U-18)
I was brought into the match earlier than usual, so I was committed to produce results. It was evident that our opponents were getting tired, so I was focused on challenging them as much as possible. When we scored the goal, I knew where Nishikawa was heading, and I managed to deliver a cross just as I imagined. I know that there are many players that are better than me in Japan, so I must keep on working to improve myself.