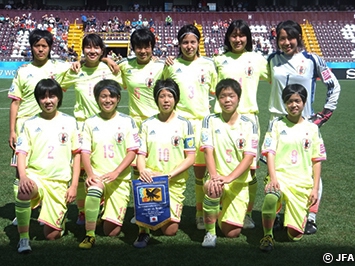 Japan got off to a good start in the FIFA U-17 Women's World Cup 2014 on Sunday, beating Spain 2-0 in their opening group match in Costa Rica.
The Japanese girls played aggressively and went ahead in the 43rd minute when Miyagawa Asato scored direct from a corner on the left.
Six minutes into the second half, Miyagawa of NTV Menina delivered a cross from the left and when Spain failed to clear the ball, Matsubara Shiho of Cerezo Osaka Sakai Ladies pounced and found the back of the net to make it 2-0.
Takakura Asako’s side could have added more after some good attacking play. Sugita Hina of Fujieda Junshin High School had a clear opportunity in the box, but Spanish goalkeeper Elena De Toro denied her attempt.
Spain came close early in the game through Mahkari Garcia, but Japan goalkeeper Matsumoto Mamiko made a good save to protect her goal.
“I’m delighted with the win,” said Japan coach Takakura. “It was our first game in the tournament, against tournament favorites Spain, but our players were well focused and kept their discipline both in offense and defense.”
Japan will play Paraguay on Wednesday and New Zealand next Sunday in Group C. Paraguay and New Zealand drew 1-1 earlier in the day.
In the 16-team tournament, the top two teams from each group will advance to the quarterfinals on March 27. The semifinals will be held on March 31 with the final and the third-place playoff taking place on April 4.