Japan U-21s draw with Kuwait in AFC U-22 Championship 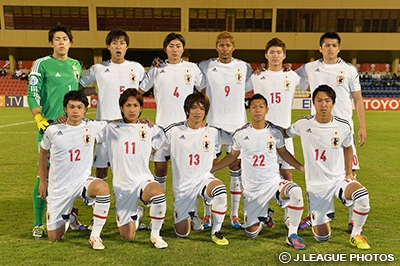 The Japan U-21 side was held to a 0-0 draw by Kuwait in their second group match at the AFC U-22 Championship on Tuesday in Muscat.

Japan changed their lineup from their first game against Iran but struggled to find their pace.

However, the young Japanese side threatened the Kuwait goal and midfielder Ohshima Ryota of Kawasaki Frontale hit the woodwork in the second half.

“It was a shame that we couldn’t score on the chances we had,” said Japan coach Teguramori Makoto. “But our players coped well with Kuwait, who used their height advantage at set plays.
“I wanted to win the game but also give playing opportunities to as many of our players as possible. We’ll approach our next game as if it was a knockout-stage match. If we can reach the quarterfinals by beating Australia, it will bring our players a lot of confidence.”
Japan are second with two points and will face Australia in their third and last group match on Thursday.
Australia have already qualified for the quarterfinals after beating Iran 1-0 in their second match to improve to six points. Iran are third with one point, followed by Kuwait, also with one point.