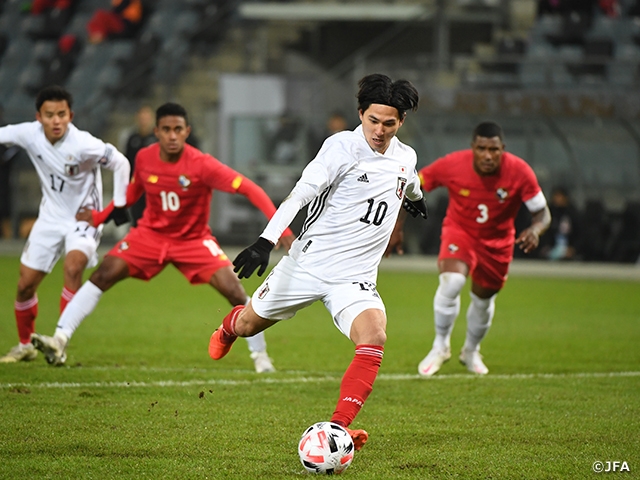 Following their match against Cameroon National Team and Cote d'Ivoire National Team at Utrecht, Netherlands, coach MORIYASU Hajime elected to start this match with a three back formation, with YOSHIDA Maya (U.C. Sampdoria), ITAKURA Kou (FC Groningen), and UEDA Naomichi (Cercle Brugge K.S.V.) controlling the defence line in front of the GK GONDA Shuichi (Portimonense S.C.). HASHIMOTO Kento (FC Rostov) and SHIBASAKI Gaku (CD Leganes) were named as the defensive midfielders, while NAGATOMO Yuto (Olympique de Marseille) and MUROYA Sei (Hannover 96) were placed in the wing-back position. For Nagatomo, this was his 123rd cap, which is the second most caps in Japan National Team history. KUBO Takefusa (Villarreal CF) and MIYOSHI Koji (Royal Antwerp FC) were positioned as the attacking midfielders with Minamino playing as the lone striker upfront.

Japan started off the match by creating early chances, as Hashimoto connected with a FK delivered by Kubo to strike a header. Minamino responded to a long feed to threaten the Panamanian goal in the seventh minute, followed by a header struck by Ueda in the 17th minute. Despite creating close opportunities, the team struggled to adjust to their new system and lacked accuracy to their passes. However, the team started to jell together as the match progressed, showcasing collective pass works past the 30th minute mark. Although the play was called offside, Miyoshi struck a close shot in the 31st minute, followed by a sequence of passes connected by Minamino, Miyoshi, and Kubo that led to a shot taken by Minamino in the 37th minute.

Panama on the other hand, formed a block to defend against the Japanese passing game, while building their offence by connecting quick passes. Gabriel TORRES struck a shot from distance in the 11th minute, followed by back to back shots taken by Victor GRIFFITH and Adalberto CARRASQUILLA in the 13th minute to threaten the Japanese goal. Torres came close to converting a shot at the end of the first half, but Gonda made the save to keep the 0-0 score intact.

The tides changed in the second half, after Japan brought in ENDO Wataru (VfB Stuttgart). With Endo placed in the midfield, Japan started to increase their ball possession and created more opportunities upfront. Introduction of HARAGUCHI Genki (Hannover 96) added more layers to the Japanese offence, as the wingman created a close opportunity for Muroya just after entering the match in the 58th minute. The golden moment came in the 61st minute, when Endo passed the ball to Kubo, who delivered a through ball to Minamino, allowing the striker to break into the box and draw a foul. Minamino calmly converted the spot kick to mark his 12th goal with the national team and give Japan the long awaited lead.

With momentum on their side Japan brought in KAMADA Daichi (Eintracht Frankfurt) and ASANO Takuma (FK Partizan) in the 71st minute. The speed of Asano caused a massive headache for Panama in the 78th minute, when he chased down a long feed delivered from the Japanese midfield. The striker burst through the Panama defence line, inducing a foul committed by the opposing GK which resulted in a red card, forcing Panama to take out Abdiel AYARZA in order to bring in their backup GK.

Japan continued to threaten the Panamanian goal in the closing minutes, as Asano and Miyoshi came close to scoring the team’s second goal, but the match ended with a final score of 1-0. With this victory, Japan has now kept three consecutive clean sheets and won back to back matches following their tour to the Netherlands.

The SAMURAI BLUE’s final match of 2020 will take place on Tuesday 17 November (Wednesday 18 in Japan) at Stadion Graz Liebenau against the Mexico National Team. Same with the previous three matches, this match will be held with no spectators in order to limit the spread of COVID-19. 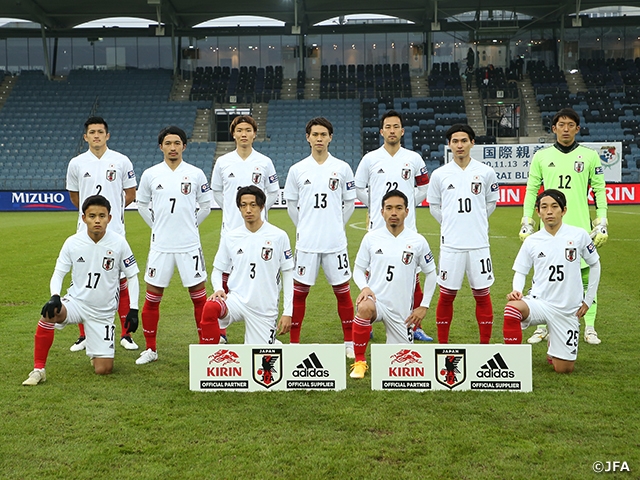 MORIYASU Hajime, Coach of SAMURAI BLUE (Japan National Team)
Instead of our usual four-back formation, we tried a three-back formation and changed many players from our match against Cote d'Ivoire. It seemed the players were testing the water in the first 15 minutes, and despite making mistakes, they continued to make the efforts to adjust to the new formation. The players also tried to play aggressively, as they gradually took control over the match as the game progressed. During halftime, I told my players to carry the ball deeper into the opposing territory, to clarify each other’s intentions, and to have the courage to challenge and execute their tasks. Endo’s substitution at halftime was a pre-planned move, but his presence really helped build the team’s momentum in the second half. We struggled to move the ball during the first half, but with Endo in the midfield, we were able to create more opportunities from the defence line and the flanks. We were much more balanced and showed better organisation in the second half, which allowed us to win the second balls and the fifty-fifty balls as a whole. However, despite seeing our opponent pressing forward after we took the 1-0 lead, we failed to convert our opportunities created from counterattacks. In such situation, we must be able to score the second and third goal to seal the match, so that is an aspect we must improve on.

GK #12 GONDA Shuichi (Portimonense S.C.)
Today we were playing almost like a five-back formation, so it seemed like we were dropping too deep, but we knew from our scouting report that our opponent was capable of penetrating the open space, so our defence line was intentionally kept low for that reason. From my perspective, we were able to keep our defence compact, but we were not able to add layer to our offence, so that is an aspect we need to work on. But all and all, it was great that we were able to keep another clean sheet.

DF #22 YOSHIDA Maya (U.C. Sampdoria)
It felt like the team was struggling in the early minutes of the first half, especially with our opponents showing a well organised defence and positioning that disabled us from utilising long balls to our forwards and wingers. It would have been better if we could have changed the rhythm of our passes or have one of our defensive midfielders drop back during our build-up plays. However, we were not expecting our opponents to keep up the pace in the second half, so we were anticipating for our opportunities to counter. I think our approach was not a bad idea, especially after rotating number of players from the line-up. We are still in the process of testing new options to broaden our arsenal, so this was not a bad performance in that sense. In order to raise the level of the team, individual players must showcase their strengths, and I strongly believe that competition within the team is essential for the team’s development.

MF #6 ENDO Wataru (VfB Stuttgart)
After watching the first half from the stands, I noticed that there were open spaces around Minamino and the two attacking midfielders, so I thought we can create chances by utilising those spaces. With our opponents running out of gas, Kubo was positioning himself effectively, so I kept my passes simple. In order to conclude this series with consecutive wins, we must pick up our pace a couple more notches against Mexico, so we will rest up and prepare ourselves for the next match. 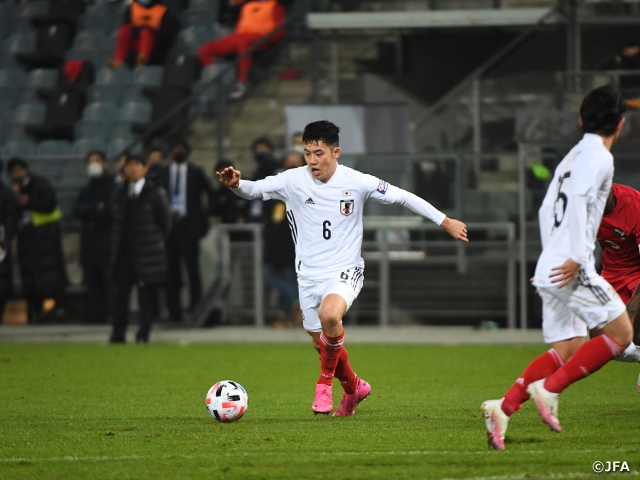 MF #10 MINAMINO Takumi (Liverpool FC)
I focused on making diagonal runs when our attacking midfielders were carrying the ball upfront, and I was able to earn a PK from one of my runs, so I am happy with the outcome. I tried not to get under the ball when taking that PK, and even though I was not able to strike the ball well, I am glad it went in. The combination plays between Miyoashi, Kubo, and myself got better as the match progressed and we were able to create some close chances in the second half. The presence of Endo really helped us connect the ball from our defence line. When playing the three-back formation, it is important that we keep the ball moving. If we keep faith in our game plan, we can create positive plays like we did today.

MF #17 KUBO Takefusa (Villarreal CF)
I was able to help the team and initiate the play that led to a PK, so I am happy with this result. In that scene, Endo delivered an excellent pass and I saw Minamino making a run, so I just had to slot the ball into the gap of the opposing defence line. The fact that we continued to stick with our game plan has led to this result. I have always given my utmost efforts in every match, but (with this being the 10th cap) I feel like I have a better understanding of my teammates and the team concept. Even though I still have plenty of room for improvements, I feel more comfortable saying that I am now part of the national team.

Thomas CHRISTIANSEN, Coach of Panama National Team
We were surprised by the three-back formation carried out by Japan, but we had the scouting reports for all of the players on the pitch. With great players like Minamino and Kubo, it is hard to keep a clean sheet against Japan. Even though we managed to create some close opportunities to showcase an equal bout in the first half, the difference between the two sides really showed in the second half. We put ourselves in a tough spot after conceding a goal from our own mistake and having one of our players getting ejected. I am proud of our players for showing great heart until the end, but the result was disappointing, nonetheless.