Close
HOME > Respect and fair play > NEWS > Encouragement to save others from despair - Always have respect Vol.107

Encouragement to save others from despair - Always have respect Vol.107 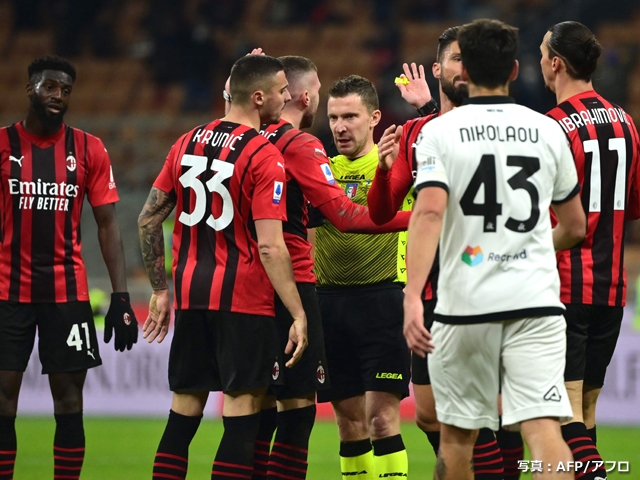 In that moment, 39-year-old Italian referee Marco SERRA’s mind went completely blank. He confidently blew the whistle for a foul. However, immediately afterwards, the fouled team converted the loose ball into the goal.

On January 17th, Serie A leadres AC Milan hosted lower-ranked Spezia. For Milan, it was a must-win match to stay in contention for the title race against their city rivals Inter Milan.

After failing to convert a penalty kick, Milan finally managed to score the opening goal just before the end of the first half but were unable to add to their tally partly due to the opposing goalkeeper’s superb performance, and conversely conceded the equaliser in the second half. The aforementioned play occurred during additional time of the second half, when Milan's Ante REBIC received a pass just outside the opposing penalty area and setting himself to take a shot.

Serra, anticipating a foul, had his eyes on Spezia's Simone BASTONI, who was chasing Rebic from behind. As Rebic wound up to take a shot, Bastoni clipped the foot of the Croatian striker to deny the opportunity and Serra did not hesitate to blow the whistle.

The next moment, however, the ball rolled into the penalty area, allowing Milan's Junior MESSIAS to strike a beautiful left footed shot that curled into the top corner of the goal.

Serra was stunned. It was a clear case in which Milan should have been given the advantage to continue with the play and score the goal. But because he blew the whistle earlier, the goal had to be disallowed.

Rebic rushed over to protest, gesturing, “Look what you just did!” Serra could only raise his hands to apologise, acknowledging that he was in the wrong.

If the match had ended there, this incident might not have been as controversial as it became. Unfortunately for Serra, Spezia scored the decisive goal from a counterattack in the sixth minute of additional time to win the match.

Needless to say, this sparked a massive media frenzy overnight, headlining, “Milan were robbed of three points” and “A major misjudgement that will have a huge impact on the title race.” President of the Italian Referees Association Alfredo TRENTALANGE also acknowledged the error and issued an official apology.

Serra recalled that he was not able to sleep that night. At the same time, however, he felt a strong desire to “give back by becoming a better referee.” This was because the Milan players came to his dressing room, one after another, to cheer him up immediately after the match.

Despite being greatly disappointed by the defeat himself, Alessandro FLORENZI gave Serra a hug. As they walked past Serra's dressing room, some players stopped by to tell him, “It can happen in football,” “Everyone makes mistakes. It’s how you bounce back that counts.” And then came Milan's ace Zlatan IBRAHIMOVIC, who is no stranger to controversies himself and has a history of getting sent off for his outbursts against referees. The 40-year-old Swedish legend made a remark to Serra, who is a year younger than him, with a firm tone,

“Now is the time to show your strength. You must react to this.”

At the time, Serra was so stunned, he couldn't fully comprehend what the players were telling him. But the next day, he couldn't thank his “fellow footballers” enough for their warm words and gestures.

Milan suffered a painful loss, but then regained the league lead with a 2-1 victory in a head-to-head encounter with Inter Milan. Serra also made a successful return in the Serie B match between Perugia and Frosinone on 12 February.

Serra received words of encouragement from many fellow referees, friends, and football fans. But in such a despairing situation, nothing could have been more encouraging than the warm gestures of the Milan players, who had been affected the most by his mistake, and I am strongly impressed by the deep humanity shown by the Milan players.

Archive
リスペクト・フェアプレー
HOME Respect and fair play NEWS Encouragement to save others from despair - Always have respect Vol.107