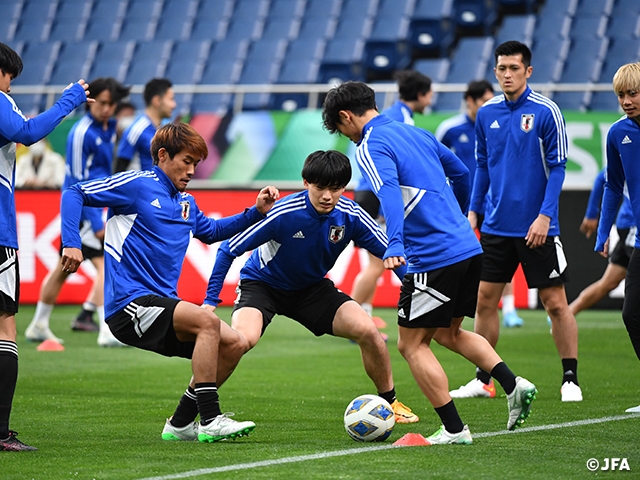 Coach MORIYASU Hajime of the SAMURAI BLUE (Japan National Team) made an appearance in the official press conference held at Saitama Stadium 2002 on Monday 28 March, the day before their final FIFA World Cup Qatar 2022™ AFC Asian Qualification (Road to Qatar) match against the Vietnam National Team, and expressed his aspirations, “We want to win at home to finish first, which will put us on track to achieve our ultimate goal at the World Cup.”

Japan, who qualified for their seventh consecutive World Cup with a win over Australia away from home on Thursday 24 March, now sit at the top of Group B with 21 points from seven wins and two losses. With a one-point lead over second-place Saudi Arabia, Japan can finish the final round of the Asian qualifiers in first place with a win over Vietnam.

After finishing in the round of 16 at the 2018 FIFA World Cup Russia™, Japan have set their sights on breaking the barrier of the top 16 and reaching the top eight at the FIFA World Cup Qatar 2022™, which starts on 21 November this year. “I want the players to keep in mind of our ultimate goal and show that they are competing with higher standards and ambition,” said coach Moriyasu.

With only eight months left to prepare for the World Cup, this match represents their first step towards their next goal.

Ahead of their match against Vietnam, coach Moriyasu suggested a major rotation of the starting line-up from the Australia match, as he mentioned, “We have secured our place in the World Cup by competing with all hands on deck, and we hope to continue to showcase a total team effort in tomorrow’s match. A different set of players will bring out different colours. We want to demonstrate different options while maintaining the base of the team.”

Vietnam, under the leadership of their long-time coach PARK Hang-seo from Korea Republic, struggled in their first ever appearance in the final round of the Asian qualifiers, ranking sixth out of six teams with one win and eight losses so far. They have lost to Japan 0-1 in the first leg played at home last November, after conceding the decisive goal to ITO Junya (KRC Genk).

Ahead of the second leg, the team arrived in Japan on Saturday 26 March. Their roster has been limited to 20 players due to the influence of Covid-19. Five of the players who started in the first leg against Japan are out, which gives them a different look to their line-up compared to the previous match.

Japan's overall record against Vietnam is seven wins and one loss (including matches from the South Vietnam-era). Vietnam is currently ranked 98th in the FIFA rankings, compared to Japan's 23rd.

On this day, Japan held an official training session at the match venue. During the first 15 minutes, in which the session was open to the media, YOSHIDA Maya (UC Sampdoria), NAGATOMO Yuto (FC Tokyo), and SHIBASAKI Gaku (CD Leganes) were seen leading the team to conduct their warmup routine, as the players took light jogs before going through core trainings and possession drills. 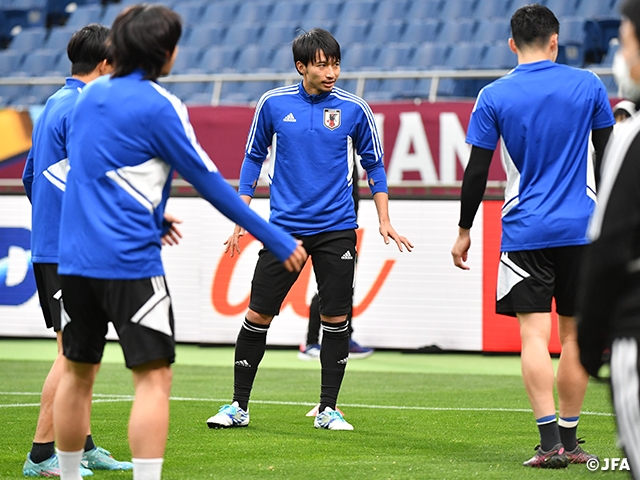 When asked about his impression on Vietnam, TANIGUCHI Shogo (Kawasaki Frontale) mentioned, “They are not the type of team that has overwhelming power or height, but they have plenty of technique and agility. They are capable of taking advantage of small gaps, so we must stay focused and play carefully throughout the entire game.”

The match between the SAMURAI BLUE and the Vietnam National Team is scheduled to kick-off at 19:35 on 29 March at Saitama Stadium 2002.

MORIYASU Hajime, Head Coach of SAMURAI BLUE (Japan National Team)
Although we already qualified for the World Cup in our last match, we would like to win the final match against Vietnam at home to finish first in our group, gain momentum ahead of the World Cup, and bring joy to our supporters. We have dealt with number of injuries and various incidents that required us to fight with all hands on deck, and we hope to continue to showcase a total team effort in tomorrow’s match. Vietnam is a very organised team that is hard to break down. They are also capable of initiating sharp counterattacks from their tenacious defence, so we must be careful. I am sure that they will enter this match with the intension to challenge and cause an upset against Japan. In that sense, it is important that we play aggressively to take the initiative of the match. We are planning to change the starting line-up significantly from our previous match, but the overall concept of the team will remain the same, and I hope that the players will be able to show their strengths to the best of their ability. I want the players to play with high intensity while displaying their skills, work as a team in both offence and defence, stay focused throughout the match, and demonstrate what we have been working as a team over the years. 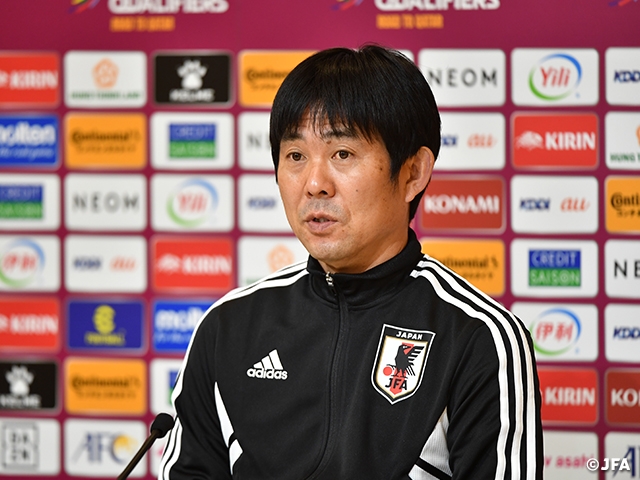 DF #3 TANIGUCHI Shogo (Kawasaki Frontale)
It was great that we were able to achieve our goal of qualifying for the World Cup in a tough away match, but we still have a chance to qualify as the group leader in our final match against Vietnam, so we hope to finish off the qualifiers on a high note. Our goal is not just to qualify for the World Cup, but to reach the quarterfinals and beyond, so every single match is going to be important to us, especially considering how much time we have left. We have many players competing for minutes on the pitch, so we hope to make the most of each opportunity we are given. I am currently in great form, but I still need to earn results on the pitch. How we manage the risks is going to be a key factor, so I will try to stay focused until the end and actively communicate with my teammates to keep everyone on the same page.

DF #20 NAKAYAMA Yuta (PEC Zwolle/Netherlands)
I entered the match against Australia as a substitute when it was still tied 0-0, so I entered with the intention of keeping the clean sheet and to assist Mitoma showcase his offensive ability. I personally feel like I was able to make the necessary adjustments following our match against Saudi Arabia. I am happy that the team has qualified for the World Cup, but the competition within the team has just begun, so I will try to make the most of each opportunity presented to me. In case I am given the start, I must prepare myself to play the full 90 minutes, respond to the opponents from the start, and make necessary adjustments throughout the match. In terms of defence, the fact that we have been able to win the individual battles has helped us keep clean sheets, and that is an aspect we have improved over the course of this Asian qualifier.

DF #22 YOSHIDA Maya (UC Sampdoria/Italy)
With the World Cup in sight, we still need to raise the overall level of the team, as well as the individual level of the players. The way we play in Asia and the world is different, and the competition within the team has started. I don't know how much we can accomplish in the limited time we have and with travel restrictions due to the Corona pandemic, but I think it is important to play against good teams to build on our strong points and improve on our weaknesses. Compared to the team from the previous World Cup, we have gained more experience, especially in defence, while we have very technical players in offence. The overall strength of the team is not affected by the presence of a few individuals. The players are hungry to play in a packed stadium. The patience of the sports, entertainment, and food industries have been tested over the recent years, but it would be nice if the football family could come together and pack the stadium with 60,000 people. We will do our best to prepare ourselves so that we can showcase a strong performance.

MF/FW #7 SHIBASAKI Gaku (CD Leganes/Spain)
We managed to qualify for the World Cup in our previous match, and rather than a sense of achievement, I personally felt a sense of relief for keeping the tradition going. Although I did not play in the match, the team showcased a performance worthy of a victory. Endo has been playing as the anchor, so regardless of the role I am given, I am always prepared to play in any position at any given time. As we qualified for the World Cup, our opponents in the group stage will be decided soon, and the composition of our team may be affected by who we play, so I will do my best to be included into the final roster. Although I have my own personal ambitions, the success of the national team is what matters the most and what we should be aiming for, so I will try to contribute to that.

MF/FW #10 MINAMINO Takumi (Liverpool FC/England)
In our match against Australia, there were many opportunities I wish I could have scored, and I want to improve myself so that I can capitalise on those situations. I am always thinking of ways to score goals, and I feel like I am heading towards the right direction. I am also conscious of the way I make my runs, the direction I am headed, and how I carry the ball. When playing for the national team, I am surrounded by players who are capable of doing a lot of those things, so I am always focused on executing my plays in the spaces in front of the goal. The intensity level is much higher in the Premier League, so the experience I gain there is very valuable for me heading into the World Cup. I hope to make the most of each opportunity I am given so that I can become a first-string player at my club. 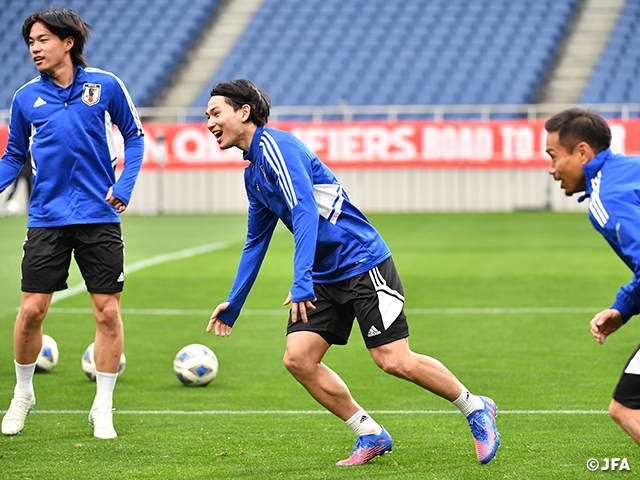 PARK Hang-seo, Head Coach of Vietnam National Team
I cannot say that Vietnam is in great form right now. We have been plagued with Covid-19 and our roster is limited to 20 players because of it. My interpreter was also quarantined after testing positive. I am deeply concerned with the current status of the team, especially facing a strong opponent like Japan in an away match, but we will do our best. This is the first time Vietnam has played in the final round of the Asian qualifiers for the World Cup, and although we have won 3-2 against China PR, with a record of one win and eight losses, we are feeling the gap between us and other teams. However, our goal is to “break away from Southeast Asia” and I believe that the players have grown a lot through this qualifier.