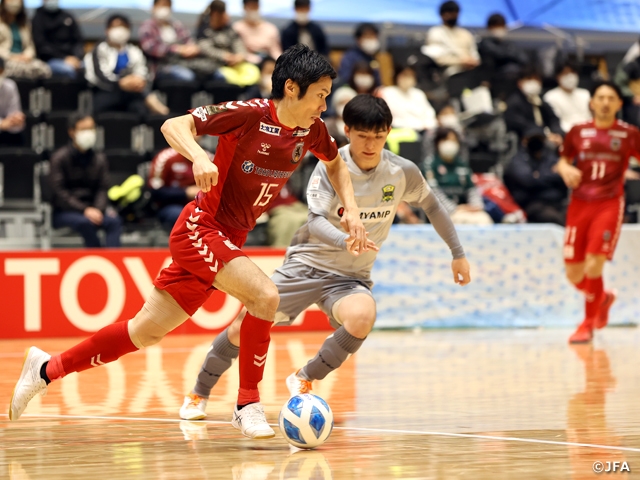 The first fixture between Pescadola Machida (F1/Tokyo) and Bardral Urayasu (F1/Chiba) saw Urayasu score the opening goal, as NAGASAKA Takumi converted the cross sent by KATO Ryuma in the fourth minute. Matchida soon responded with the equaliser scored by MOTOISHI Takehiro in the 14th minute.

With the two goalkeepers, Machida’s PIRES Higor and Urayasu’s FUJIWARA Jun, showcasing solid performances, the match remained tied until the 32nd minute, when Nagasaka forced a turnover from Pires and assisted the goal of GARRINCHA. However, after HARA Shinsuke was ejected from the match after receiving his second yellow card, Machida took advantage of the numerical difference and once again levelled the score with the goal of MOURI Gensuke. Although Urayasu was not able to capitalise on the numerical advantage created by the ejection of Machida’s ITO Keita in the 39th minute, the Chiba side scored three goals in extra-time to punch their ticket into the semi-finals with a 5-3 victory. 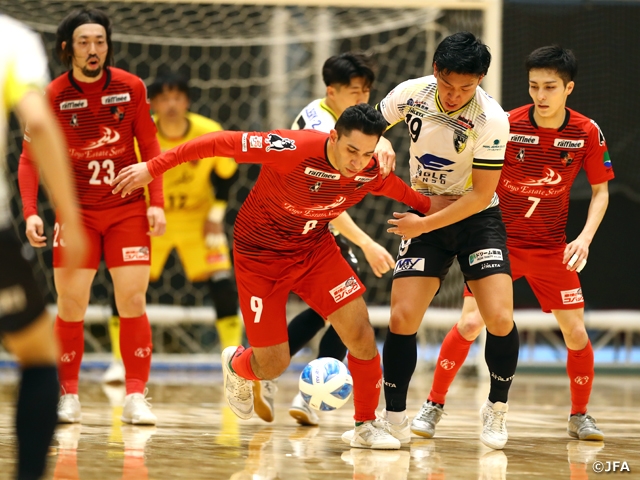 Nagoya Oceans (F1/Aichi), who are seeking for their sixth Japan Futsal Championship title, faced Deucao Kobe (F2/Hyogo), the only F.League Division 2 club remaining in the tournament. Despite the early efforts made by Kobe to keep the match tied, Nagoya went into a goal spree led by OLIVEIRA Arthur, who scored a hat-trick within the first period. With HIRATA Neto Antonio Masanori and YAGI Kiyoto adding to the tally in the second period, Nagoya advanced to the semi-finals with a final score of 6-0.

In the match between Tachikawa-Fuchu Athletic FC (F1/Tokyo) and Shriker Osaka (F1/Osaka), the two sides exchanged a goal apiece, as the opener scored by Osaka’s NAKAI Shunto in the ninth minute was countered by Tachikawa-Fuchu’s equaliser scored by their goalkeeper KUROMOTO Guilherme in the 12th minute. With Tachikawa-Fuchu gaining momentum from the save made by Kuromoto to deny the PK taken by Osaka’s KATO Minami in the 15th minute, the Tokyo side rallied with the goals scored by KANYAMA Tetsuichi, KANAZAWA Sora, and ARAI Yusei to win the match 4-1. 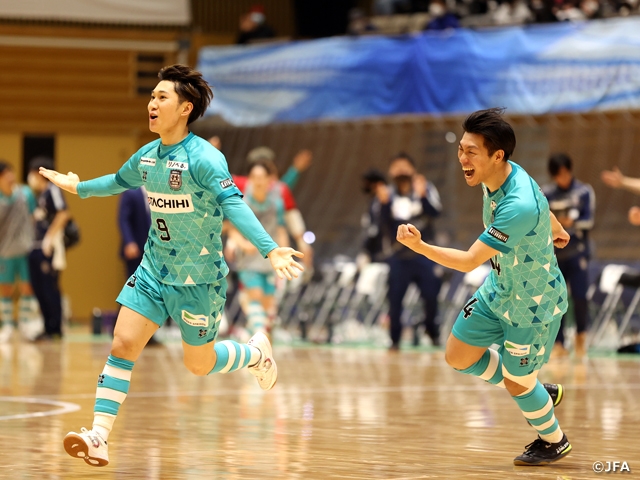 The last fixture of the day featured the Kyushu Derby between Vasagey Oita (F1/Oita) and Bork bullet Kitakyushu (F1/Fukuoka), in which Oita’s goalkeeper YAZAWA Daimu really made his presence felt. After assisting the goal of KOKADO Yuta in the sixth minute, the Japan National Team goalkeeper made number of great saves to deny the chances of Kitakyushu. Despite conceding the equaliser to TAMURA Kento in the 18th minute, Yazawa continued to showcase a solid performance to keep the Fukuoka side at bay. Gaining momentum from their goalkeeper, Oita took the lead with the goal scored by PACATO in the 34th minute to win the match 2-1. 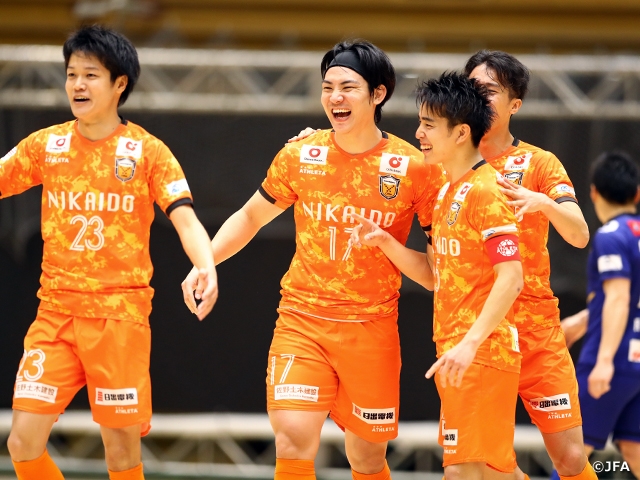 The tournament will continue on Sunday 20 March with the semi-finals taking place at Komazawa Olympic Park.

KOMIYAMA Yusuke, Coach (Bardral Urayasu)
The fact that we were able to respond well against our opponent’s pivot, which is their strong point, was huge. We had a hard time evading the intense pressure applied by Machida, but in terms of defence, we were able to contain Motoishi and Mouri from doing their job. Everybody on this team knew that we had to win today. I am proud of my players for giving their best and working hard until the end.

FP #5 HOSHI Ryuta (Nagoya Oceans)
I knew before the tournament that I would be leaving this club at the end of this season, but I am not getting carried away just because this is my last tournament. I am feeling the same way I always have, and I want to go for the title as a member of the Oceans until the end. Ideally, I would end my career in Nagoya, but it is all about business and not all wishes can be granted. Right now, my mind is clear so that I can focus on the competition in front of me.

FP #21 NAGUMO Sota (Tachikawa-Fuchu Athletic FC)
I have not been able to showcase good performances in the league competitions, but I was able to earn my spot by working hard in training sessions and performing well in each opportunity I was given to play on the pitch. I hope to continue with this trend and become a first-choice player on this team. I was a little conscious (about facing SAITO Hyuga and NAKAI Shunto, who he lost against at the JFA 8th U-18 Japan Futsal Championship final). I have never won against them when they were playing for Teikyo Nagaoka and the Niigata select team, so I am glad I was able to win today.

GK #1 YAZAWA Daimu (Vasagey Oita)
Kitakyushu are good at applying pressure from the front line, and we always struggled against them, so we focused on utilising long-balls and managing our risks today. Although we conceded a lot of shots, I personally didn’t think we conceded any crucial chances, so I think we did well in that aspect. However, the only goal we conceded came from a set-piece where our opponent took advantage of a gap in our wall. That was something we had been trying to avoid, so we must acknowledge the issue and make sure that it never happens again. I personally have never reached the final before, so even though we are a bit short in numbers, we hope to reach the final.