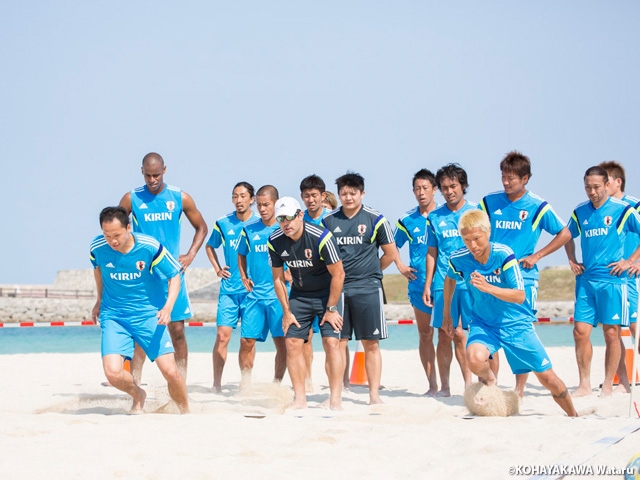 On the third day of the training camp, the team held two sessions under the clear sky.
The day (20th April) happened to be the opening day for the Tropical Beach, and the surrounding areas of the pitch were crowded with the opening events.
The players first warmed themselves up, stimulating their bodies that were beginning to show some signs of fatigue.
And then, they worked on 2-on-2s and 3-on-1s repeatedly, so they could unconsciously use them in actual games.
In the afternoon, while there were ceremonies for the beach opening and some bands were having their live shows before a large crowd, the team started their session. For those who may not know, beach football is played in loud back ground music, even in the FIFA World Cup. So actually because of the beach opening, it gave more like the genuine atmosphere for the beach football team.
In the afternoon session, the team was divided into three groups and they got to work on shooting from certain formations. Coach Mendes and players raised their tension in it, and the two-hour session finished so quickly. 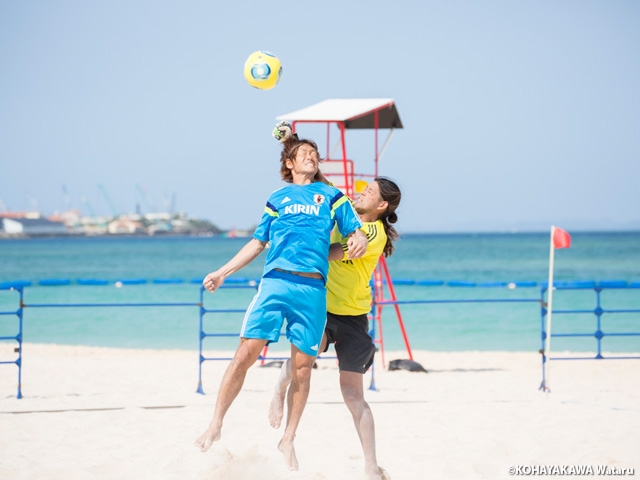 After the training sessions, the team played a staff game with the girls football team of Ginowan Municipal Makishi Junior High School, who helped pick up the balls during the practices. The Japan team, with coach Mendes and team staffs along with four players like Yamauchi, Goto, Matsuda and Matsuda, actually struggled against the energetic Makishi girls and barely had a 3-2 win.
After the match, the team was presented a collection of autographs by the junior high team and they left the Tropical Beach in a sociable fashion. 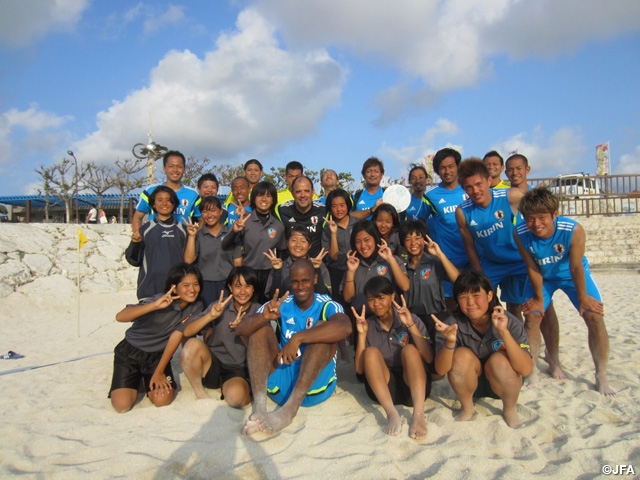 TERUKINA Shingo (Sol Mar Praia)
This training camp was meant for us players to understand what kind of team our coach wants to make and what he asks the goalkeepers for.
Coach always gives instructions to the field players, so it's really helpful for us to have the goalkeeper coach because he casts advices from behind us. Usually the goalkeepers practice exchanging unlimited discussions between us, but it is good to have a coach who watches us with objective looks, so we can work to his intensions and objectives. So we would definitely like the goalkeeper coach to come back.
Coach Mendes is someone that we had not had previously at the national team and he teaches us a lot of practical formations. In fact, we can envision his tactics that he wants to use for games, and honestly speaking I am feeling that we can be successful under his leading. Under this coach, we hope to establish the team that can compete against the stronger teams equally or even do better.

MATSUO Naoya (Pracia Yamaguchi)
As we have had the new head coach, every one of us has worked on our practices thinking so many different things. Our previous head coach, coach Ramos, told us not to stick too much with the tactics and to play as we wanted to, so now there are things it's easier for us do to and things it's not really easy for us to do. Coach Mendes' instructions are so detailed, so it's helpful when we don't know what to do and also at times we have to hold ourselves when we are about to play too freely. I would like to show my game while playing under the team strategies that the coach wants to install.
Meanwhile, the coaching change means that we have more competitions inside the team and it gives the younger players more opportunities. I think that we need to threaten the positions of our older players and eventually lead the team, and I believe that those competitions will make the team more tougher.
I think that we have the Asian qualifier for the World Cup this year. I have never played against Asian teams before, so I'm looking forward to it. We would like to prove that the instructions of Mr. Ramos and coach Mendes are not wrong on the pitch.