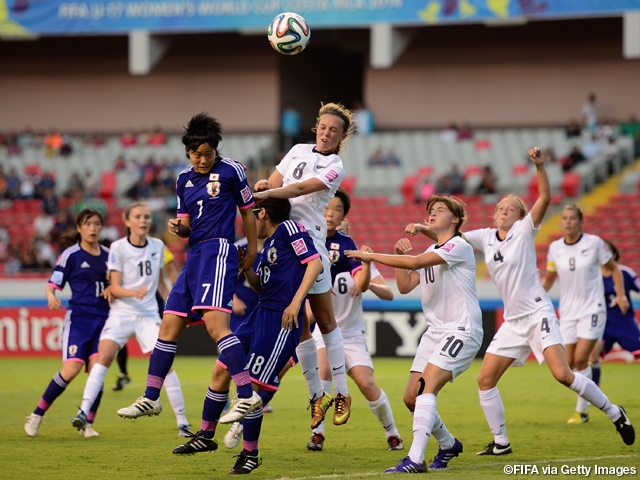 Japan topped their group after a 3-0 win over New Zealand on Monday at the FIFA U-17 Women’s World Cup in Costa Rica.
Japan dominated the game, firing 24 attempts at goal while holding the young Kiwis to five shots.
In the 20th minute, Saihara Mizuki beat two defenders and delivered a ball from the byline to Hasegawa Yui, who hit a right-foot shot to put Japan 1-0 up.
Kobayashi Rikako made it 2-0 with a penalty in the 71st minute after Ichise Nara’s goal attempt hit the hand of Elizabeth Anton in front of the goal.
Miyagawa Asato, who scored in each of the two previous matches, and Hasegawa both hit the bar.
In the third minute of additional time, Matsubara Shiho hit a brilliant volley from mid-range to complete the scoring for Takakura Asako’s side. It was Matsubara’s second strike of the tournament.
Japan topped Group C with nine points while keeping a clean sheet in all three games. Spain (six points) downed Paraguay 7-1 to finish second. New Zealand and Paraguay finished with one point each but New Zealand finished third on goal difference over the South Americans.
The Japanese girls will next meet Group D runners-up Mexico in the quarterfinals on March 27.