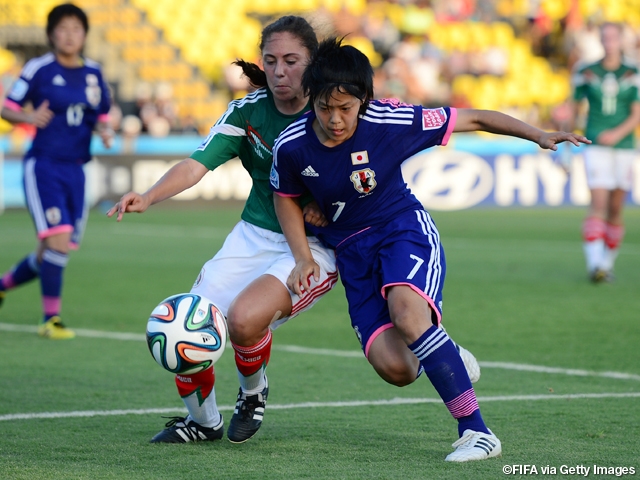 The Japan women’s U-17 side defeated Mexico 2-0 in the quarterfinals of the FIFA U-17 Women’s World Cup in Costa Rica on Thursday, advancing to the semifinals of the biannual tournament.
Hasegawa Yui gave Japan an early lead in the 12th minute and the NTV Beleza attacker’s third strike in the tournament helped her side set the pace of the game.
Sugita Hina, who scored a 12-minute hat trick in Japan’s 10-0 victory over Paraguay in the group stage, made it 2-0 two minutes before the break.
The Fujieda Junshin High School attacker reacted well and slotted home the rebound after Mexico goalkeeper Emily Alvarado turned away a penalty by Hasegawa. The penalty was awarded after Hasegawa was brought down by Gabriela Martinez in the box.
Takakura Asako’s side continued to control the game in the second half and ended up with 28 attempts at goal over the 90 minutes to the Mexicans’ five.
But Japan coach Takakura said it was not an easy game for her side.
“It was a very difficult game,” said Takakura, “The heavy wind made it hard for us to play with our usual tempo.”
In Monday’s semifinals, Japan will play Venezuela.
Venezuela edged Canada 3-2 in their quarterfinal on Thursday, after topping Group A with three straight wins and three clean sheets.
Takakura said, “Venezuela have good players and very strong forwards. It won’t be an easy game, but I think we can beat them if we play to the best of our ability.”