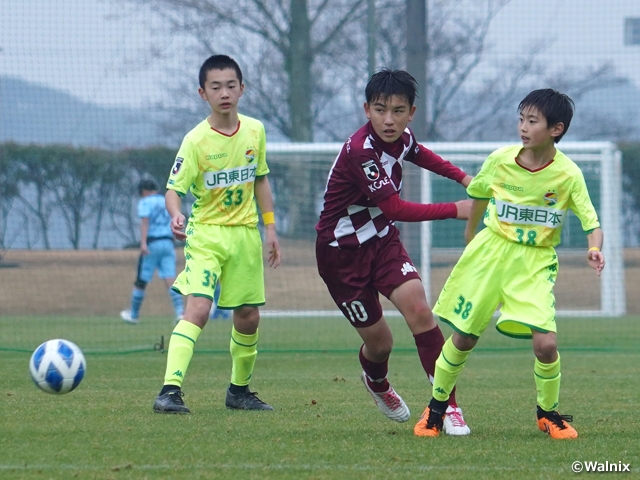 The second day of the JFA 44th U-12 Japan Football Championship took place on Sunday 27 December, where the remaining matches of the first round and the round of 16 were played at Fureai Sports Land in Kagoshima.

The third fixture of the first round took place in the morning, as each team competed to earn their ticket into the round of 16. At Group J, first place Fanaticos (Gunma) squared off against second place Renofa Yamaguchi FC U-12 (Yamaguchi). After the first half ended scoreless, Fanaticos took the lead with the goal scored by TAKAHASHI Atsuro in the 21st minute.

Just a minute after conceding the opener, Yamaguchi responded with the goal scored by YUKUTOMO Kanon, assisted by SUENAGA Rea. With momentum on their side, the Yamaguchi side captured the go-ahead goal in the next minute, as TANAKA Daito converted the deflection off the cross bar to make it 2-1. After successfully coming from behind in just two minutes, Renofa Yamaguchi FC earned the victory mark, which gave them enough points to tie Fanaticos, but it was the Gunma side who advanced through to the round of 16, as they edged Yamaguchi in goal difference. 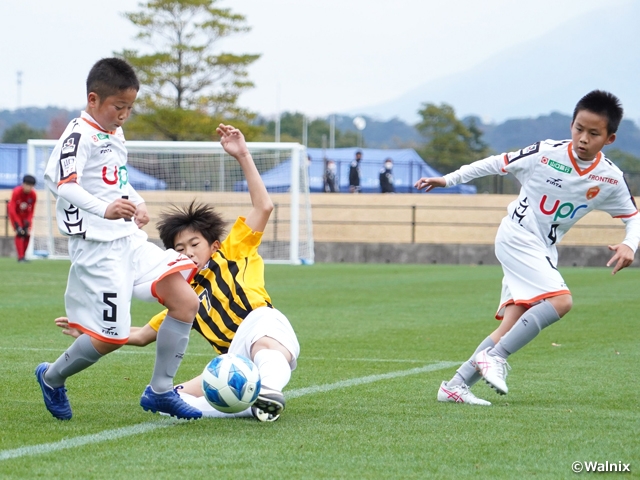 With the rain coming down after lunch time, the pitch condition changed dramatically. The slippery surface induced many mistakes, as many teams struggled to connect their passes at the round of 16.

The match between Sorriso Kumamoto U-12 (Kumamoto) and Vegalta Sendai Junior (Miyagi) saw the two sides create many opportunities from the early minutes. While Kumamoto’s MASUDA Soichiro and NOGUCHI Rento orchestrated the offence to threaten the opposing goal, Sendai’s IWATE Hibiki penetrated the flanks to create shooting opportunities.

Although the two sides combined for nearly 30 shots, the score-line remained tied at 0-0 after regulation time, sending the match into PKs to determine the winner. The shootout continued until the eighth kicker. After Kumamoto’s GK TAKAMITSU Susumu made the save, he converted the subsequent spot-kick himself to guide his team into the quarterfinals.

JEF United Chiba U-12 (Chiba) squared off against Vissel Kobe U-12 (Hyogo) at the round of 16. The match entered a deadlock after both sides exchanged a goal apiece in the early minutes. However, the deciding goal came in the closing minutes of the match when Chiba’s HIMENO Makoto pierced a shot into the Kobe goal. With this victory, JEF United Chiba advanced to the quarterfinals.

The quarterfinals and semi-finals will take place at Kamoike, Kagoshima on Monday 28 December. Friendly matches between eliminated teams will also be played on the same day. 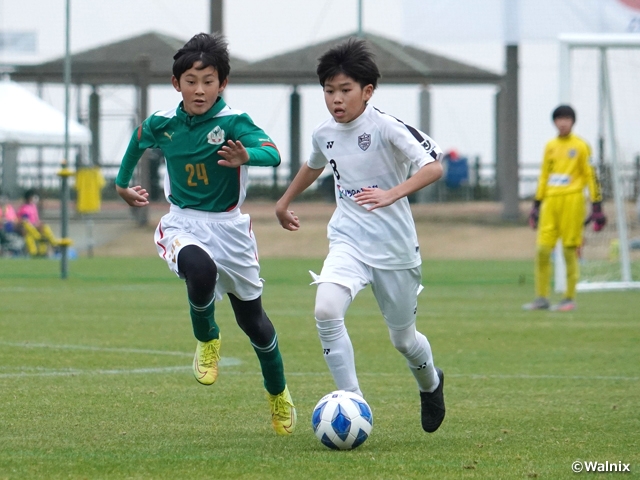 SENBA Shutaro (FC Zebra Kids/Ehime)
Although I was able to score the deciding goal, I feel the need to heighten the quality of my dribbling and passing skills. We talked during halftime to play defence with more intensity and to pass with more accuracy. I am still in fifth grade, so I still have another chance left. I hope to return to this stage and advance to the final round next time.

KASHIMOTO Taku (Kamitonda FC/Wakayama)
We fought hard as a team and played a memorable match. We wanted to win a match, so it felt great when we scored the opening goal against Arriba FC. Our goal was to reach the final round, but now that we are eliminated, we hope to learn from this experience and try to become a better team.

NOTOBE Tsukasa (Omushi FC/Fukui)
We were trying to build our offence by collecting the ball to our attackers, but we lacked quality in the final third and fell short from scoring a goal. We were overwhelmed by our opponent’s strengths and size at the first round and couldn’t find our rhythm. I hope to utilise this experience at the junior high school category. I will work hard to become a better defender.

SUENAGA Rea (Renofa Yamaguchi FC U-12/Yamaguchi)
We needed to win with at least a four goal margin to advance, but we focused on each of the battles in front of us. I am glad that I was able to assist a goal, and help the team win the match. I hope to become a player that can entertain the viewers, while also enjoying the game and helping the team win matches.