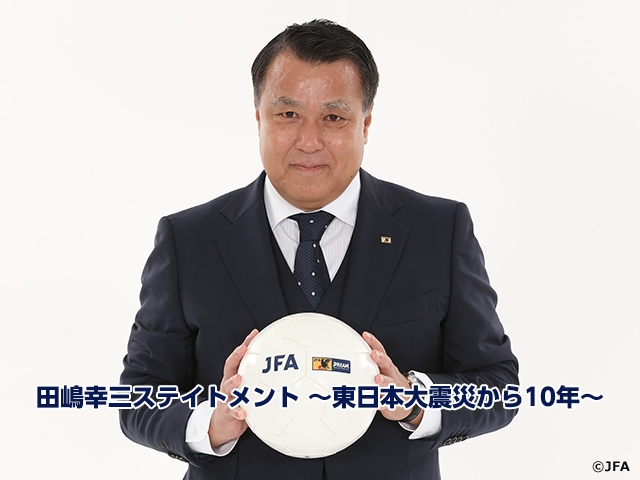 In the wake of the Great East Japan Earthquake, Japan Football Association (JFA) has launched the “Gambaro Japan! - Unite with the Football Family!” Project, to unite the football world during difficult times, as well as to pay respect to those fighting the crisis such as natural disasters and the new coronavirus.

In line with the resumption of football activities, the project aims to unite the football family with the common slogan of “Gambaro Japan! - Unite with the Football Family!” to face and overcome these difficult times without fearing them, as “Gambaro” is the Japanese phrase which means “let’s hang in there together”.

The slogan banner and logo are made available on this page as rights-free materials for companies and individuals supporting the project, so please feel free to make use of them.

It has been 10 years since the Great East Japan Earthquake. We would like to extend our most sincere condolences to the victims of the earthquake and their bereaved families.

An unprecedented earthquake beyond our imagination, the scars left were so big, it made us question our existence as a sports organisation, “What can football do?”

Shortly after the earthquake, with the fans’ growing demand for a charity match and the strong desire of the players to help the victims through the match, JFA and the J.League got together to host a charity match between the SAMURAI BLUE (Japan National Team) and the J.League Select Team (J.League TEAM AS ONE) at Nagai Stadium, Osaka on 29 March 2011. Over 40,000 fans attended the match, with hopes for the earliest possible recovery. At the venue, not only the participating players and coaches, but the players and supporters belonging to clubs in the Kansai region also helped to promote the charity merchandise and fundraising activities.

Following the above charity match, players, fans, and supporters expanded the circle of support in their respective ways, including the “J.League Players with Tohoku Spirit” established by volunteers of J.League players from the six prefectures of Tohoku.

We also received large amount of donations and messages of encouragement from football families around the world.

The FA Silver Cup, which was presented by The Football Association (The FA) in 1919 and helped the establishment of JFA, was unfortunately taken away by the Government of Japan as part of their wartime measure to collect metal during the World War II. However, having known the fact, The FA again reproduced the FA Silver Cup and presented to JFA on the occasion of JFA’s 90th anniversary as a token of friendship and a prayer for reconstruction.

All the positive wishes sent from the football family at home and abroad reminded us of the strong bond created through football.

The sensational efforts made by the Nadeshiko Japan at the 2011 FIFA Women's World Cup Germany have been deeply engraved in the minds of many people. The driving force behind the remarkable run was the unwavering desire of the players to cheer up the victims, and their bold presence challenging the mighty USA side, became a ray of light that shined through the dark clouds caused by the earthquake. After seeing the people from the affected areas rejoicing over the victory, I was able to realise the “Power of sports.”

Also, in April of that year, Captain KAWABUCHI Saburo took the initiative to launch the “Sports Kokoro Project,” which was a joint project between four organisations: JFA, Japan Sports Association (Current Japan Sport Association), Japanese Olympic Committee, and Japan Top League Alliance. While receiving financial support from the Japan Sport Council, “Smile Classes” were held at primary schools (including some junior high schools) in the affected areas in September, just six months following the earthquake. It was the first time for sports organisations and its athletes to collaborate for an extended period of time, making this a historic step for Japanese sports.

After 10 years, the joint project came to an end this March, but the JFA Kokoro Project will succeed its mission and will continue to provide support to the children of the affected areas. Joined together by football players and athletes from other sports, we are determined to protect and support the healthy development of our children.

This year, JFA will celebrate its 100th anniversary in September.

In March, the JFA Medical Centre adjacent to J-Village resumed operation within Fukushima prefecture, and the JFA Academy Fukushima boys’ team returned to J-Village in April. We are also planning on hosting various tournaments and events at J-Village.

Since the nuclear accident, Fukushima has suffered from unfounded, reputational rumours, but the smiles of the children can help eradicate such prejudice. Once the academy returns, children and their supporters will gather from all over the country to enjoy football. There are still plenty of people who are evacuated from their hometowns, and once people can safely return to their homes in Futaba region, we can say that we have fully recovered from the disaster.

The affected areas have not been completely reconstructed.

The “Recovery Olympics” is the basis of the Tokyo 2020 Olympic and Paralympic Games. Japanese football will also take part in spreading the message from J-Village, which is our second home, to keep the memories of the earthquake from fading away and contribute to the reconstruction efforts of the affected areas.

This March marked 10 years since the Great East Japan Earthquake, and at JFA.jp, we will look back on the past 10 years with the football family who experienced the earthquake as well as those who were involved in the reconstruction efforts and together, we will continue to think about the future of the affected areas.