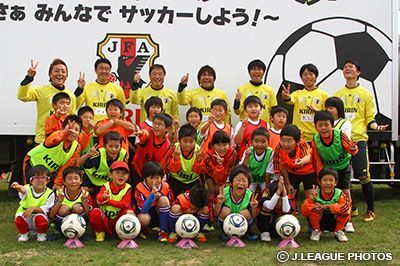 Japan Football Association gathers support from Football Families all over the world and has been carrying out various reconstruction support activities so that our Football Family members affected by Great East Japan Earthquake can recover the environment to practice football regularly.

A bank account was opened right after the earthquake to raise contributions. Thanks to the donations from Football Families throughout the country, we were able to raise \263,423,073 and donated the money to Japanese Red Cross Society. In addition, we have been raising "reconstruction support fund for Football Family" so that Japan Football Association can actually conduct reconstruction support activities at the affected areas. We have received a lot of support from all over the country including FIFA (Federation Internationale de Football Association) and now have more than nine hundred million yen. By using the financial resources, we have been conducting various reconstruction support activities.

The activities range from maintaining facilities, supplying goods, and holding football classes to supporting everyday football activities of teams in Iwate, Miyagi, and Fukushima, which experienced more damage than other prefectures. This includes subsidizing transportation expenses and waiving registration fees. In addition, since September 2011, we have had specially appointed coaches who take charge of reconstruction support. (TEGURAMORI Hiroshi is now in charge.) They have visited the affected areas and have interacted with local coaches and children. As they try to grasp constantly changing circumstances in the affected areas, they have found out needs of victims and have continued to offer them thoughtful support.