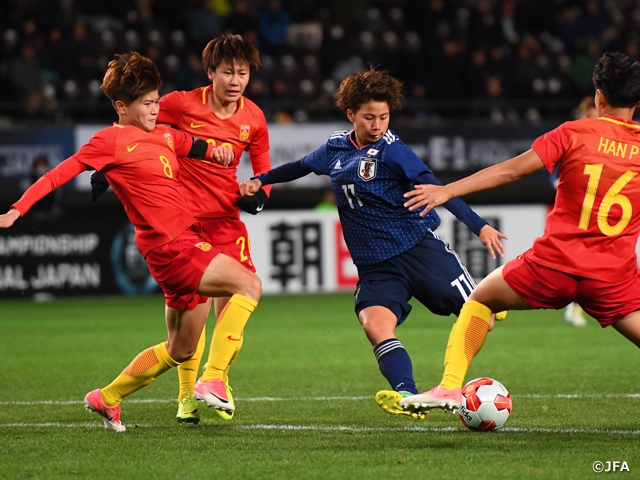 The match between the two Asian rivals started at 18:55 and Nadeshiko Japan employed a 4-1-4-1 formation, while they changed four starting players from the first game against Korea Republic. SUMIDA Rin was positioned at defensive midfielder and NAOMOTO Hikaru and SAKAGUCHI Mizuho were placed in front of her as central midfielders. Two wide midfielders were captain NAKAJIMA Emi on the left and NAKASATO Yu on the right. 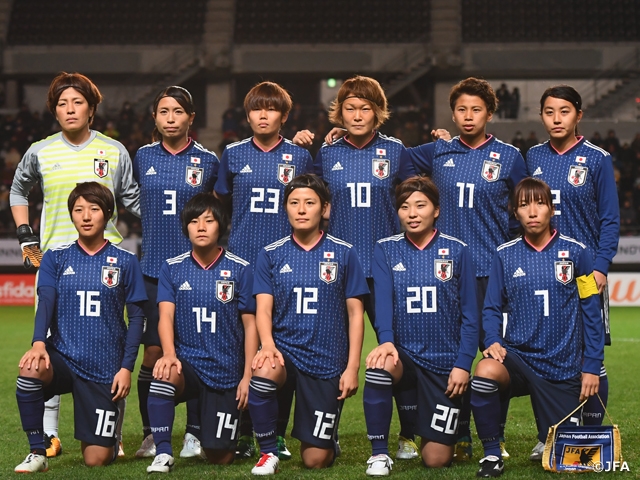 The strong wind affected both teams, but it was the Nadeshiko squad who scored the opening goal in the 20th minute. Eyeing on TANAKA Mina running inside the penalty area, Nakajima dribbled up towards the opponents’ goal and sent a neat pass to her. Then the Nadeshiko striker collected the ball and fired into the bottom-right corner of the goal to give her side the early lead.

Japan were looking to score additional goals to secure a win, but the passing errors kept them from creating effective scoring chances. On the other hand, China PR were targeting the open space to hit on the counter after they reclaimed possession.

Scary moment for Japan came in the 38th minute, when SAMESHIMA Aya reacted to the loose ball and made a sliding clearance, but the ball hit the opposing forward, TANG Jiali, and headed towards the Japanese goal. Fortunately for the Nadeshiko side, Goalkeeper IKEDA Sakiko parried it away from danger by stretching the left arm and protected the goal. The scoreline stayed the same as they took a one-goal advantage at halftime.

IWABUCHI Mana came off the bench from beginning of the second half to invigorate the Japanese team and orchestrate better attacking plays.

In the 57th minute, Nakajima took the ball up and went inside the left side of the box, but her cutback was secured firmly by the opposing goalkeeper, ZHAO Lina, and was unable to deliver it towards intended target Tanaka.

Japan subbed in forward MOMIKI Yuka to bring some attacking flair to their offence. Momiki attempted to impact the game by putting strong pressure on their opponents upfront, but her team were still unable to connect effective passes after they intercepted the ball.

Even such was the case, Japan fashioned a promising chance in the 80th minute. An excellent cross from OYA Ayumi on the left was met by Iwabuchi, but her header went straight into the hands of the opposing goalkeeper.

Still Iwabuchi was relentless on her pursuit to score goals as she collected passes from Momiki on 88 minutes to fire a shot and subsequent from Sakaguchi to make another attempt at scoring, but both efforts went wide to the right of the Chinese goal. The score remained the same until the final whistle.

Nadeshiko Japan failed to score more goals, but still managed to keep a clean sheet and edge China PR 1-0. The team grabbed two consecutive wins and they are now only a step away from claiming the title for the first time in three championships.

In the other fixture that was played on the same day, DPR Korea beat Korea Republic 1-0. Japan and DPR Korea, both having two wins so far in the competition, will square off each other for the championship in the third game on Friday 15 December.

TAKAKURA Asako, Coach of Nadeshiko Japan (Japan Women’s National Team)
It was excellent that we won the match 1-0. We have a tight schedule and, seeing some new players in good form, I decided to change few starting players from the first game. China PR were a very good team and I don’t think that we were able to display much of our own playing style of keeping possession and threatening the opponents’ goal. We still have plenty of room for improvement in both offence and defence as well. By taking this win as a positive, we are looking to face DPR Korea with all our strength. Despite narrow wins, we managed to win consecutive matches in a very competitive EAFF E-1 Football Championship 2017 Final Japan. I am looking forward to the coming match that we will be played with competitive spirit from both sides and will give our best to win the game as well.

MF #10 SAKAGUCHI Mizuho(NIPPON TV BELEZA)
Despite making a good start to the game, we couldn’t take the initiative as we made simple errors. We should have fixed our problems, but couldn’t do so before halftime. As I took on a more attacking role today as central midfielder, I should have got more involved in the attacking plays as well. We should have kept better possession, but fell into the trap of playing the game at the same pace as our opponents. I believe that our decision making was poor today. I expect a tougher match against DPR Korea next. With three days between the games, we are looking to make the necessary adjustments before we challenge them.

FW #8 IWABUCHI Mana (INAC KOBE LEONESSA)
I am glad that we won today. Taking about myself, I had at least two excellent chances to score and should have taken advantage of them. We struggled to keep a clean sheet and, in that sense, it was a meaningful result. However, I felt also that we needed to move the ball more effectively to take the initiative of the game. I couldn’t score today and, as a result, we must now win the next game to grab the championship. I am looking to contribute to the team’s victory by scoring goals in the next game against DPR Korea and end the tournament with smiles.

FW #11 TANAKA Mina (NIPPON TV BELEZA)
Looking back at the goal I scored, (Nakajima) Emi sent me a superb pass and all I needed to do was to slot it into the back of the net. I did well when I scored the goal, but lost possession often as well. That is one area that I need to work on. Our defence was not good as we hoped and gave away chances for our opponents to hit us back on the counter. Their attacks on the counter were very quick and we had a difficult time defending against them as well. The team including myself must reduce the number of errors that we make during the game. Personally, I needed to find open areas where I could control the ball and create chances for the team. However, I must add that we edged a tough contest and gave us also a chance to claim the championship as well.

SIGURDUR RAGNAR EYJOLFSSON, Coach (China Women’s National Team)
I believe that our players performed really well and displayed their fighting spirit as well. In the first half, we managed to create several goal-scoring chances. I am not really happy about the goal that we conceded, but I saw great improvement in the team as well. It was a great match. We changed few players from the first game and this change worked well. In particular, the defence today was excellent. As I understand, Japan play excellent possession football and I instructed my players during the meeting that we would try to kept them away from entering the dangerous areas with the ball. This game plan worked well for us as well.