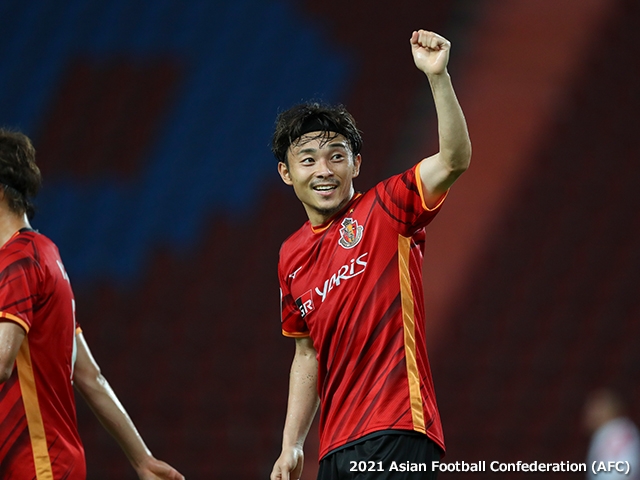 On Sunday 4 July, Nagoya Grampus defeated Johor Darul Ta'zim (Malaysia) 2-1 in Bangkok, marking their fifth consecutive win in the group stage of the AFC Champions League (ACL) 2021 East region. With this victory, Nagoya have secured the top spot of Group G and became the first Japanese club to clinch the knockout stage.

Nagoya got off to a great start in the group stage, winning all four matches before facing JDT for the second time. After seeing the match between second place FC Pohang Steelers (Korea Republic) and Ratchaburi FC (Thailand) ending in a scoreless draw, the Japanese side were set to clinch the top spot with a win over JDT in this match. With the players fully aware of their position in the group, Nagoya started off the match showing great intensity to attack the opponent.

The opening goal came in the fourth minute, when MATEUS responded to a through ball sent by ABE Hiroyuki to penetrate the box and drew a foul. The Brazilian striker converted the spot kick himself to give Nagoya the lead in the early minutes. With the one goal lead, Nagoya took full control over the match as they showcased great concentration to keep the ball moving. SOMA Yuki came close to scoring a goal in the 25th minute, when he responded to a pass sent by Abe to break into the box and struck a shot.

Nagoya extended their lead in the 28th minute, when NAGASAWA Kazuki delivered the final pass to Abe, who displayed a spectacular individual effort to curl in a left footed shot into the far corner, giving Nagoya a 2-0 lead.

After conceding two goals, JDT responded just before halftime, when CORBIN-ONG struck a powerful shot from distance. The shot was initially blocked by Nagoya’s GK LANGERAK, but Ramadhan SAIFULLAH was there to convert the deflection to cut their deficit in half. This was the first goal conceded by Nagoya in this competition.

Despite conceding a goal at the end of the first half, Nagoya continued to apply pressure in the second half, as Soma, Mateus, and YAMASAKI Ryogo made attempts to threaten the opposing goal. KAKITANI Yoichiro, MAEDA Naoki, and INAGAKI Sho were introduced to the match in the 55th minute, leading to a close opportunity created by Maeda and Soma in the 63rd minute, but Soma’s shot was denied by a superb save made by the GK.

The tides gradually shifted towards JDF after the hour mark, as Ahmad Hazwan BAKRI fired a powerful shot that struck the cross bar in the 62nd minute. However, Nagoya managed to keep their lead for the remaining half hour to walk away with a 2-1 victory to clinch their spot into the knockout round.

Following the match, Soma commented, “I am glad that we were able to advance through as the group leader.” But the winger also mentioned, “There were many opportunities we could have converted, so that is an aspect we must improve ahead of our next match.” 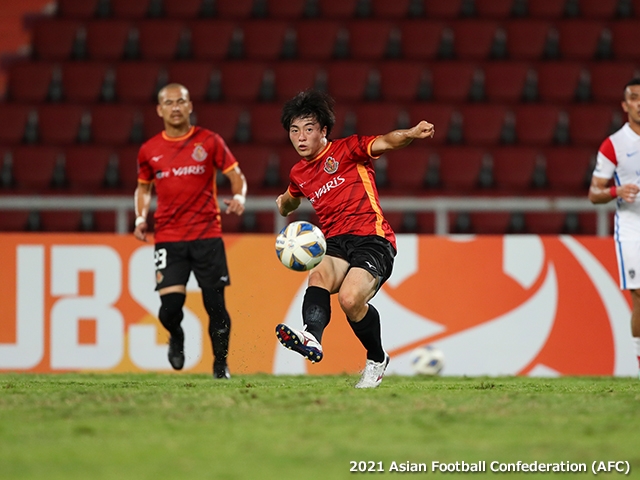 On Monday 5 July, Kawasaki Frontale played their second leg against United City FC (Philippines) in Tashkent, where they earned a 2-0 victory, thanks to the goals of CHINEN Kei and HASEGAWA Tatsuya. With this result, Kawasaki have now won four consecutive matches, taking themselves one step closer to the knockout stage.

In a match where they faced the same opponent in a three day span, Kawasaki rotated eight players from their starting line-up and applied aggressive pressure from the start of the match. The opening goal came in the 18th minute, when Chinen intercepted the opponent’s back-pass towards the GK and slotted the ball into the net.

With momentum on their side, Kawasaki continued to create opportunities, as Chinen, Hasegawa, and TONO Daiya each had a chance to take a shot but fell short from finding the back of the net. In efforts to add layers to their offence, Kawasaki introduced WAKIZAKA Yasuto, TANIGUCHI Shogo, IENAGA Akihiro, and YAMANE Miki in the second half, a series of substitution that later came to fruition, as Ienaga, Yamane, and Wakizaka were all involved in setting up the goal scored by Hasegawa in the 78th minute.

Following the match, Kawasaki’s coach ONIKI Toru praised his team, “The players worked extremely hard to accomplish our goal, which was to earn a victory.” But also commented on their performance, “We failed to convert our opportunities and made the match much tougher than it needed to be.” The coach concluded by sharing his aspiration ahead of the remaining two matches, “We will work to raise the quality of our plays in the final third.”

With this victory, Kawasaki now have 12 points, while Daegu FC (Korea Republic) sits in second place with nine points. The two teams will clash in the fifth fixture, meaning that Kawasaki will have a chance to clinch the knockout stage depending on the result of their match against Daegu.

Ahead of the big match, NOBORIZATO Kyohei commented, “We can clinch the knockout stage with a win, so our main focus will be to earn three points. We will fight for the ball with high intensity and try to showcase the strengths of Frontale.” Coach Oniki also shared his take on the next match, “We will enter the match as if it is the tournament final.” 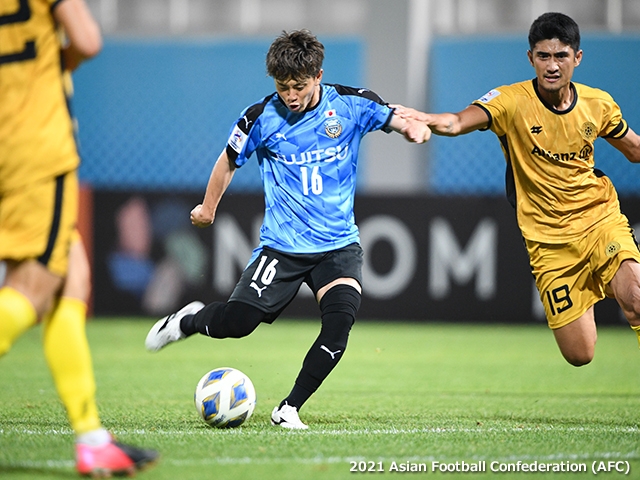 Fixtures in Group H also took place at Tashkent on Sunday 4 July, as Gamba Osaka played in their second leg against Chiangrai United (Thailand). In the returning leg where the two sides faced each other for the second time in three days, Gamba squeezed out a point after scoring the equaliser in the second half but got themselves in a tough position to advance through, as the Osaka side have now tied three matches in a row.

After conceding the equaliser to Chiangrai in the closing minutes of the first leg, Gamba rotated 10 players from their starting line-up. However, it was the Thai side who struck first in this match, as Felipe AMORIM scored the opener in the sixth minute.

Despite creating opportunities that threatened the opposing goal, Gamba fell short from scoring the equaliser in the first half. In efforts to change the dynamics of the match, the Osaka side brought in PATRIC and KUROKAWA Keisuke to start the second half, which allowed them to initiate attacks from the flanks. Gamba’s long awaited goal came in the 54th minute, when YAJIMA Shinya’s cross deflected off of a Chiangrai defender and ended up in the back of the net.

Late chances were created by IDEGUCHI Yosuke and MIURA Genta during additional time of the second half, but both of their attempts were saved by the Chiangrai GK.

After the match, Yajima reflected on their performance, “Our defence did not function well, which influenced our offence. We weren’t able to find our rhythm as each player was hogging the ball too much.” Gamba’s coach MATSUNAMI Masanobu also commented after seeing his side draw in three consecutive matches, “We lacked quality and idea at the final third.”

In order to advance through to the knockout stage, Gamba must win their group or get within the top three runners-up in the East region. After playing four matches, Gamba now have six points. Two clubs who are currently sitting in second place at other groups also have six points, but both clubs have only played three matches thus far, meaning that Gamba must win the remaining two matches to keep their hopes alive to reach the round of 16. 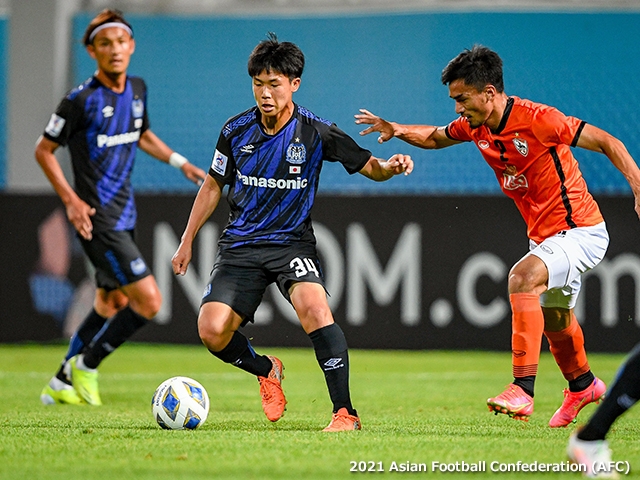 On Saturday 3 July, Cerezo Osaka played their second leg against Port FC (Thailand). After OKUBO Yoshito scored his first ACL goal since 2014, the Osaka side won the match 3-0 to remain in first place of Group J.

After drawing against Port 1-1 in the first leg played on 30 June, Cerezo rotated eight players from their starting line-up, as Okubo, TAMEDA Hirotaka, and NISHIO Ryuya took the pitch.

The opening goal came in the 12th minute, when MARUHASHI Yusuke smashed a spectacular shot following a short corner-kick. Okubo made it 2-0 just before the break, as the veteran striker responded to the deflection of his own shot in the 45th minute.

After scoring his first ACL goal this season, Okubo commented, “This was a match we couldn’t afford to lose, so I am glad we were able to grab the lead in the early minutes.”

Carrying their momentum from the first half, Cerezo made it 3-0 in the early minutes of the second half, as SAKAMOTO Tatsuhiro tucked in a shot into the far post in the 47th minute. Following the match, Cerezo’s coach Levir CULPI praised his players, “The players showcased a high quality performance and their determination to score as many goals as possible.” The Brazilian coach seemed to be pleased with his players’ performance in the recent matches, as he mentioned, “Through these two matches, we were able to put the overall strengths of Cerezo on display.”

On this day, second place Kitchee SC (Hong Kong) have also won their match against Guangzhou FC (China PR), keeping close tabs on the Osaka side. Cerezo could clinch their spot into the knockout stage depending on the match results of 6 July. 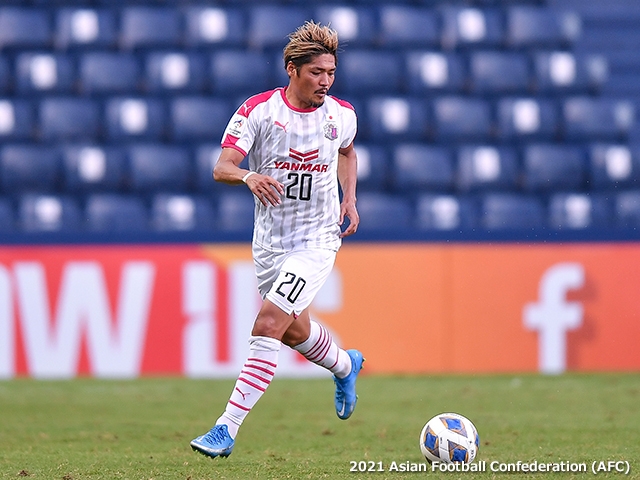 Massimo FICCADENTI, Coach (Nagoya Grampus)
In football, the entire momentum can shift from a single incident. Our opponent really changed the dynamics of the match after scoring back a goal. After taking a 2-0 lead, our team had many opportunities to further extend our lead, but failed to capitalise on our chances, which allowed our opponent to gain momentum. I feel that this could have been a much easier match. However, considering that the players are being isolated at their hotel between each match, I must say that they are doing their best within the given circumstance. Instead of focusing on what we lacked, I would like to praise our players for what they have done despite the tough situation.

GK LANGERAK (Nagoya Grampus)
We managed to enter the match very well and dominate the match until we conceded that goal before halftime. We had to score our third and fourth goal during the first half to close the door on our opponent. Our mentality and discipline were tested in the final 30 minutes of the match, as our opponent dominated the match. We had to keep our focus at a high level, so I kept encouraging my teammates. Despite playing under a tough environment, we have been able to dominate all of our matches for the most part. My teammates have been working extremely hard, so I am very grateful for their efforts.