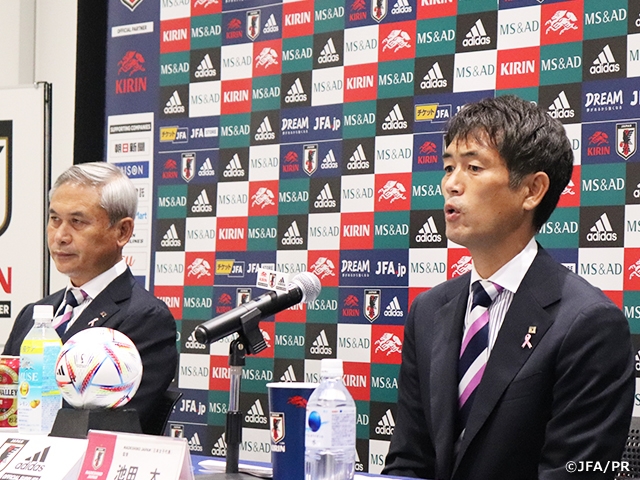 NAGANO Fuka (North Carolina Courage) and UEKI Riko (Nippon TV Tokyo Verdy Beleza) were among the players selected from the team’s championship campaign at the EAFF E-1 Football Championship 2022 in July, while players who have recently transferred to clubs abroad, including SHIMIZU Risa (West Ham United) and MINAMI Moeka (AS Roma) were also selected.

Three players, FUJINO Aoba (Nippon TV Tokyo Verdy Beleza), KOYAMA Shinomi (Cerezo Osaka Sakai Ladies), and HAMANO Maika (INAC Kobe Leonessa), were selected from the U-20 Japan Women's National Team, who finished second in the FIFA U-20 Women's World Cup Costa Rica 2022™. For Fujino and Koyama, this was their first call-up to the senior side.

When asked about these three players, coach IKEDA Futoshi commented, “Fujino is a player with great speed, and I love the way she attacks the goal. Hamano is another attack-minded player who can also possess the ball. We look forward to seeing how much they can show their own colour and how they mesh with other players. Koyama showed great mobility as a left back for the U-20 Japan Women's National Team, but I would like to see her play with more quality while also maintaining her mobility. With the addition of Koyama, the age range of the team will widen, and I would like to see what kind of chemistry she brings to the team.”

The two matches will provide an important opportunity for the team to prepare ahead of the FIFA Women's World Cup Australia/ New Zealand 2023™ to be held in July next year. Coach Ikeda commented on the points he would like to build upon, “We are always striving to improve the quality and intensity of our plays. In terms of our concept of ‘winning the ball,’ we would like to see more players with speed and the ability to score goals. With that being said, we also need these players to demonstrate their ability to make decisions and execute plays under pressure.”

Ikeda, who will lead his side in their first international friendly match held in Japan since taking over as the coach of Nadeshiko Japan, commented on their first opponent, Nigeria, “They showed great speed and strength even at the U-20 level. We must be careful of their unique speed and tempo and try to pass the ball around their strong defence to create chances. We want to play to our strengths while taking into account the strengths of our opponents.” Regarding New Zealand, he added, “They are co-hosting the Women's World Cup with Australia next year, and they have been strengthening their squad in the run-up to the event. From what I have seen in a few of their matches, I think they are a team that is willing to try new things, and capable of applying pressure from their frontline. We don't know how they will play against us, but we will see what we can do against a well-prepared opponent like them. With the short preparation period, the players’ responsiveness will be tested as we take on new challenges.” 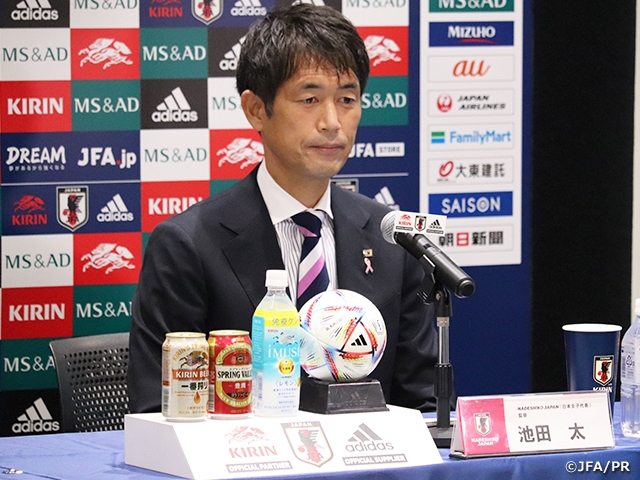 SASAKI Norio, Chairman of JFA Women's Committee
This will be our first international friendly held in Japan since last November, and the first for coach Ikeda. We now have the opportunity to showcase the team after winning the EAFF E-1 Football Championship 2022. The match will be televised, but we hope you will come to the stadium to support Nadeshiko Japan on their way to next year's FIFA Women's World Cup Australia/ New Zealand 2023™. 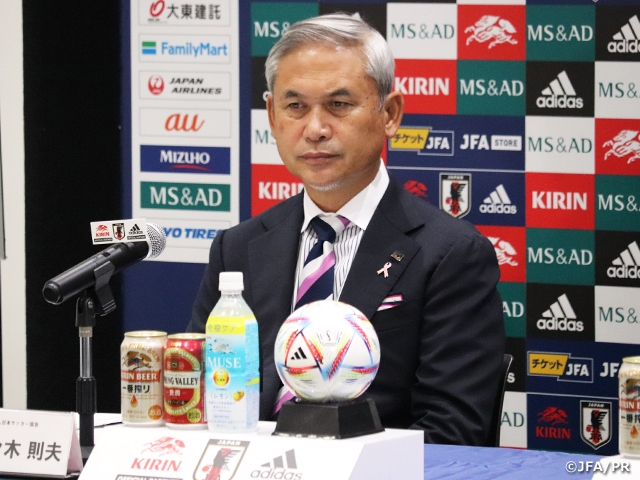 IKEDA Futoshi, Head Coach of Nadeshiko Japan (Japan Women's National Team)
We are really pleased to be able to play these international friendly matches in Japan. The aim will be to strengthen the team for next year's FIFA Women's World Cup Australia/ New Zealand 2023™. I hope that we can make a new start towards strengthening the team with variety of players, including those who took part in the championship campaign at the EAFF E-1 Football Championship 2022 in July, those who are thriving in the WE League and Nadeshiko League day in and day out, and those who fought in the FIFA U-20 Women's World Cup Costa Rica 2022™ last month. We hope to use these two matches to expand the foundation of the team by exploring different combinations between players who play abroad, upcoming players, and the veterans. It is also a great opportunity for the people in Japan to see us, so we hope to showcase the Nadeshiko way of playing football, which is all about playing with aggression and tenacity, while taking on challenges with a positive attitude.