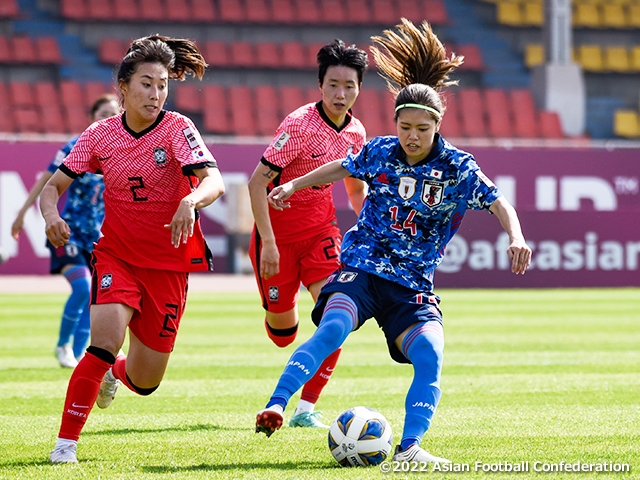 Aiming to claim their third consecutive victory in the group stage, Japan rotated seven starters from their match against the Vietnam Women's National Team three days ago. With YAMASHITA Ayaka (INAC Kobe Leonessa) returning as the starting goalkeeper since the first match, KUMAGAI Saki (FC Bayern Munich) and SHIMIZU Risa (Nippon TV Tokyo Verdy Beleza) made their third start in a row. It was NAOMOTO Hikaru (Mitsubishi Heavy Industries Urawa Reds Ladies) and NAGANO Fuka (Mynavi Sendai Ladies) who started as the defensive midfielders, while NARUMIYA Yui (INAC Kobe Leonessa), who has scored in back to back matches, was placed in the right side, with UEKI Riko (Nippon TV Tokyo Verdy Beleza) and HASEGAWA Yui (West Ham United) starting as the two strikers upfront.

Japan got off to a hot start, as they scored the opener 30 seconds into the match. The goal came when Ueki responded to a long feed delivered by MIYAKE Shiori (INAC Kobe Leonessa), before striking a right footed shot that found the left hand corner of the goal.

With the team scoring the opener in three consecutive matches, Japan continued to apply pressure upfront, as Hasegawa superbly controlled the pass from Nagano to strike a shot in the 14th minute, but her attempt was saved by the opposing goalkeeper.

In the 27th minute, Kumagai fired a header off of a corner kick taken by Naomoto, and despite the efforts made by Hasegawa to convert the deflection, their efforts were denied by the Korean defence. Narumiya also tried her luck before halftime, but her shot was denied by the goalkeeper. 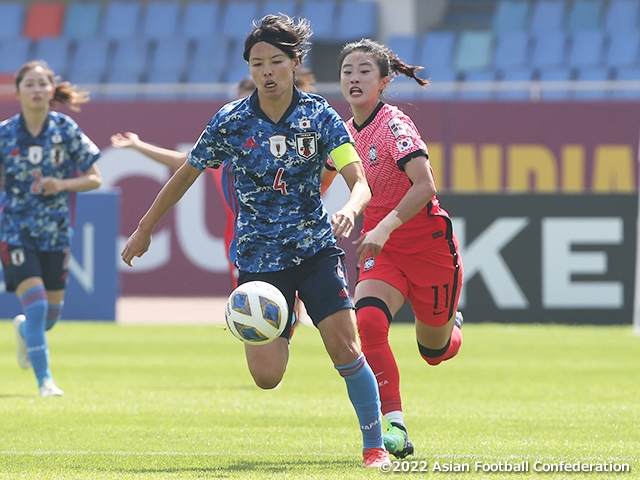 Korea Republic, who needed a win to take the group lead, picked up their momentum in the second half. In the 56th minute, JI So-Yun dribbled up the field to threaten the Japanese defence-line, but Kumagai was there to deny the attempt. LEE Geum-Min struck a shot in the 73rd minute, but Japanese goalkeeper Yamashita made a one-handed save to keep the clean sheet intact.

Japan also made attempts with their set-pieces and mid-range shots but couldn’t find ways to extend their lead. Conversely Korea Republic scored the equaliser in the 85th minute, when SEO Ji-Youn converted a loose ball following a goalmouth scramble. With momentum on their side, Korea Republic came close to taking the lead from a corner kick shortly after the equaliser, but Yamashita stepped up to make the save.

The two sides walked away with a point apiece, as the match ended 1-1. As a result, Japan took the lead in Group C with a record of two wins and one draw. Following the match Hasegawa was named as the Player of the match.

The Nadeshiko Japan are now in position to qualify for the FIFA Women's World Cup Australia & New Zealand 2023™ with a win in the quarterfinals played on Sunday 30 January.

IKEDA Futoshi, Coach of Nadeshiko Japan (Japan Women’s National Team)
It was great to see our side score as soon as the match started, and we are happy to have finished the group stage in first place. However, there were still room for improvements in terms of how we supported each other and the way we moved the ball. We are happy to advance through, but we still need to brush up on our combination plays and become able to score more goals. Everyone who played on the pitch played their part and showed a good performance, both offensively and defensively.

MF #14 HASEGAWA Yui (West Ham United/England)
This was a match we wanted to win, so we are not satisfied with this result, but it was great to see our side score first, because that was something we had been talking about. We struggled to make adjustments in the second half, after our opponent changed their approach, so that is an aspect we must improve on. The fact that we didn’t lose the match gives us confidence, but there were lots of things that did not go the way we wanted. I am also not satisfied with my own performance, so even though I am honoured to be named as the player of the match, I will not sit on my laurels and continue to strive for a higher quality.

FW #19 UEKI Riko (Nippon TV Tokyo Verdy Beleza)
It is disappointing that we couldn’t win, but one of our missions was to advance through the group stage in first place, so we are happy to have achieved that. (Reflecting on the goal scene) It was still early in the match, so I tried testing the waters by challenging the opponent with my speed. I was able to control the ball well and keep a good distance with my opponent, and I am glad it led to a goal. One of the team’s goals is to qualify for the Women’s World Cup, so we are only looking for a victory in our next match. I hope to score goals that will help the team win matches and ultimately win the AFC title. 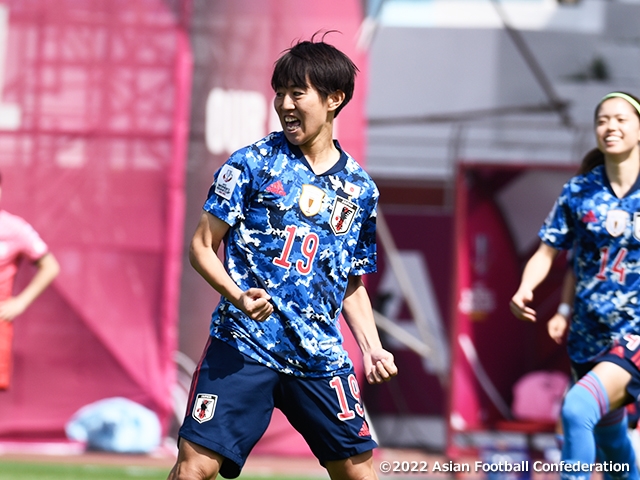