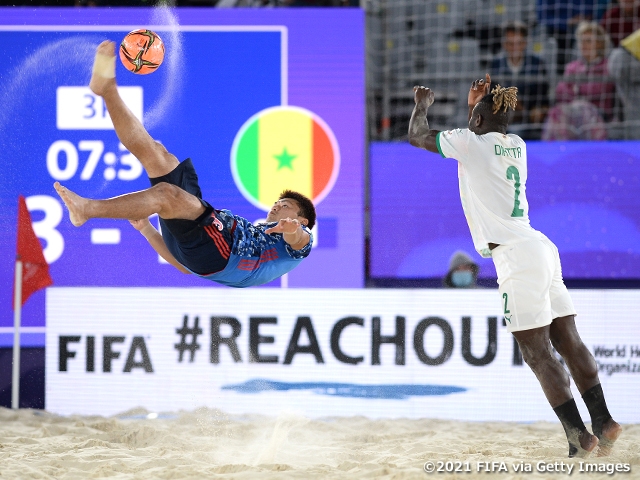 With their first ever appearance in the World Cup final at stake, Japan started UESATO Takumi for the first time in this tournament, while Senegal entered the match with three of their core players suspended for this match.

The first period started with Senegal taking advantage of their athleticism to take shots from distance, but the Japanese players showcased great composure to defend their goal. At the end of the period, Senegal rallied with consecutive shots, but the Japanese goalkeeper KAWAI Yusuke showcased a tenacious effort to block the attempts to end the first period scoreless.

Japan scored the opening goal in the third minute of the second period, when AKAGUMA Takuya was fouled in the penalty area to earn a PK. With Akaguma calmly converting the spot kick, Japan finished the second period with a one goal lead.

Despite conceding the equaliser in the second minute of the third period, Japan picked up their pace and scored three consecutive goals within a three minute span, as OBA Takaaki, OKUYAMA Masanori, and Akaguma each showcased a bicycle kick to find the back of the net.

Senegal scored their second goal by converting a corner kick in the ninth minute mark, but just a minute later, Akaguma scored his third goal of the match to maintain the three goal lead for Japan. In efforts to close down the gap, Senegal made their final push in the closing minutes, but the Japanese players responded with great efficiency to walk away with a 5-2 victory.

With this win, Japan clinched their first ever final at the FIFA Beach Soccer World Cup. YAMAUCHI Shusei, who is making his ninth appearance at the World Cup, shed tears of joy, while player-coach MOREIRA Ozu shared his delight, “This is like a dream. We faced a tough opponent, but we fought hard as a team to make history.” 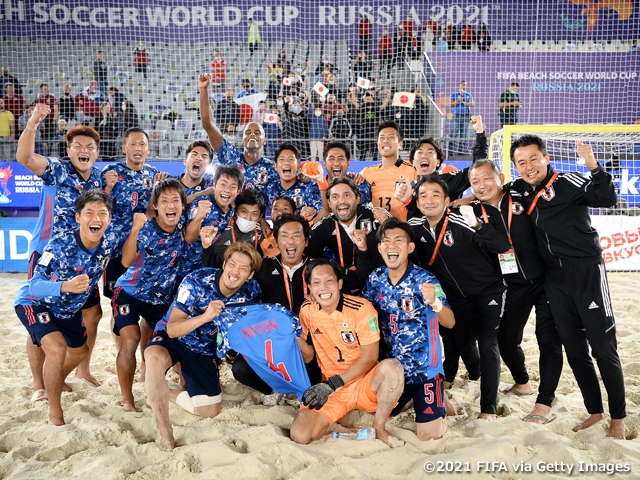 Japan will face Russia, who they lost 1-7 at the group stage, at the final on Sunday 29 August. Ahead of the big match, Moreira shared his aspiration “We hope to showcase a spectacular match and bring back the gold medal.”

GK #1 KAWAI Yusuke (Tokyo Verdy BS)
This match against Senegal was a very difficult match, but we were able to minimise the damage, while capitalising on our opportunities to earn the victory. The fact that the entire team was facing the same direction helped us win the match. This tournament is held under strict measures to prevent the spread of the infection, and we are very pleased to welcome the two medical staffs who are helping us condition ourselves along the way. Although beach soccer is still a minor sport, we are in a position to promote the sport by earning results at the world stage. While Akaguma is striving to win the golden boot, I am working towards winning the best goalkeeper award. Now that the team is in the final, we have a realistic chance of winning the awards. We will give our best efforts to showcase a strong performance at the final so that the team can win the gold medal, while also obtaining the individual awards.

FP #6 AKAGUMA Takuya (Lazo Apego Kitakyusyu)
I was extremely nervous taking the first PK, but I remembered the words of coach Tabata, “Please clear the bitterness we felt from finishing fourth in the last tournament,” and used it as motivation to convert that shot. I made my move exactly as our coach directed to score the second goal with a bicycle kick. The third goal came from a perfect delivery of Uesato, and I just had to convert it. Although we were limited with our activities due to the corona-pandemic, we were given the opportunities to constantly hold training camps, which allowed us to build a relationship that enables us to communicate closely with each other. Despite the tight scheduled, I am in great condition. We have two medical staffs who are supporting us at all times, and we are served Japanese food that are prepared by our team staffs, which is helping us maintain our conditions. Heading into the tournament, my goal was to become the number one pivot in the world, so I hope to score many goals at the final to win the golden boot and help the team win the gold medal.

FP #11 OKUYAMA Masanori (Loewe Yokohama)
(Reflecting on the goal scene) Ozu delivered a great pass, so I just focused on making good contact. I am glad I was able to direct the ball to a perfect course. Coach Tabata’s scouting report and strategical analysis have helped us tremendously to make it this far. The team is supported by two trainers, who are allowing us to play in our best conditions at all times. The power sent from our fans in Japan has been a major help as well. We are also thankful to all the support we are receiving in Russia as well. We will now face Russia, who we lost 1-7 at the group stage, so we hope to get our payback at the final. We will give our best efforts to bring home the World Cup to Japan.