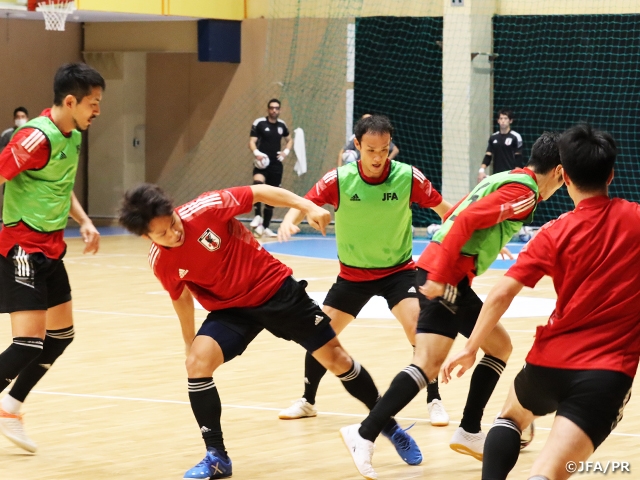 With the FIFA Futsal World Cup Lithuania 2021™ scheduled to kick-off in two days, the Japan Futsal National Team held a team meeting and a training session on Friday 10 September.

The team has entered the official tournament period of the World Cup and they are being required to operate under various tournament regulations as before. Other participating teams have also arrived in Lithuania, as Paraguay, who will be staying at the same hotel as Japan, checked in on this day. Teams are assigned with their own training schedule, and Japan trained at 20:00, just after Angola, who they will face in their first group stage match. With the team buses and arenas being decorated in the tournament theme, it built up the vibe that the tournament was just around the corner.

Coach Bruno GARCIA used videos to go over the team’s tactics and principles at a meeting held before their evening training session. Futsal consists of a goalkeeper and four field players. In the limited space of 20m x 40m, 10 players are playing in a radius of several meters, and it is a sport that requires every player to be directly involved in the game at all times. Similar to the meeting held on the day before, the roles of the second, third, and fourth players in defence were being explained, along with the responsibilities of each player at each given situation. The basic defensive principles are the same as football, but due to the pitch size and the number of players, there are very little margin for errors and many of the plays are pre-designed in both offence and defence. Rather than a passive approach where the players react to the opponent’s offence, the Japanese defence is designed to apply aggressive pressure to force turnovers that will allow them to initiate attacks. Through their matches against the world powerhouses, coach Garcia has expressed his confidence on the team’s defence.

On this day, the team went through drills that focused on their offence from the 3-1 formation, while working on making defensive adjustments in case something irregular happened. In order to realistically simulate a situation that can occur in a match, irregular rules may be set for each drill, but on this day there was a scene where some of the players were uncertain of the purpose of the drill. That was when coach Garcia stopped the session to readdress the purpose of the drill and keep the players on the same page. The session ended with a scrimmage, in which the players played with great intensity, showcasing their strong determination to make a deep run at the tournament. 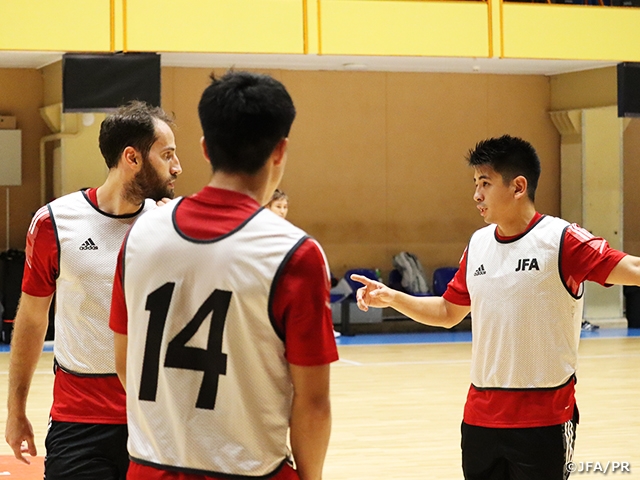 FP #3 HOSHI Ryuta (Nagoya Oceans)
Playing in the World Cup was my family’s dream, including my father who passed away last year, and I'm really happy to be selected with my brother. Although my career has been plagued with injuries, I think I was able to reach the stage of this World Cup because I gained experience in the AFC Futsal Club Championship and F.League with Nagoya Oceans. We were able to qualify for this World Cup because of the track record of the Japan National Team, and I am grateful to all the people who has made this World Cup possible, despite the ongoing pandemic. We will give our utmost efforts to win points. For the fans who have supported Japanese futsal, this will be their first World Cup in nine years. Let’s fight together to bring Japan to the highest step on the podium.

FP #4 YAGI Kiyoto (Nagoya Oceans)
First of all, I would like to thank all the people who has made it possible for us to travel overseas and take part in this World Cup. I was unable to play for more than half a year after suffering a serious injury in 2019. Playing in the World Cup felt like a distant dream at the time, but with the support of many people, including my family, I was able to make the squad. I will do my best to showcase a strong performance at this wonderful stage and try to give back to all the people who has supported me over the years. During the training camp held before this World Cup, HIRATA Neto Antonio Massanori left the team after suffering the same injury I sustained. He is a teammate that stood by me in difficult times, so I hope to play on behalf of him. Playing in the World Cup is my dream. I would like to enjoy every moment while giving my best effort to fulfil the responsibility as a member of the national team. It may be difficult to come watch us in Lithuania, but I hope you would support us through the broadcast.