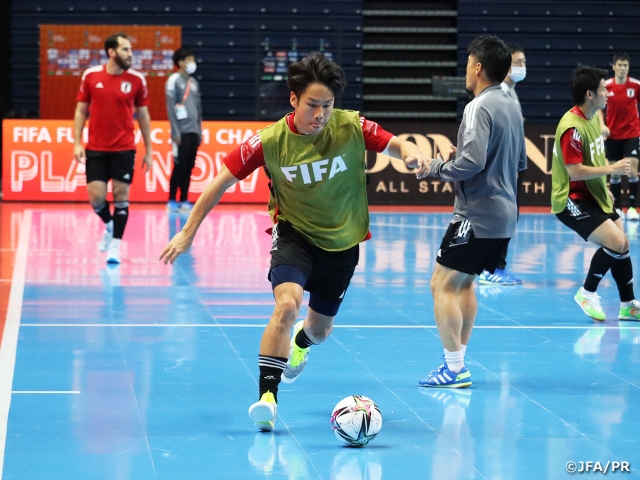 One day ahead of their third group stage match of the FIFA Futsal World Cup Lithuania 2021™ against the Paraguay Futsal National Team, the Japan Futsal National Team held their final training session at the match venue, Vilnius Arena, on Sunday 19 September.

Entering the eighth day of the tournament, four out of six groups have completed the group matches. While the host nation Lithuania was eliminated, Russia, Portugal, and Brazil each clinched the knockout stage as the group leader of their respective groups.

After playing two matches, Japan is currently in second place of Group E with one win and one loss. Japan’s next opponent Paraguay also holds the same record, but Japan has the advantage in goal difference, putting them in position to clinch the knockout stage with a draw or better. However, coach Bruno GARCIA made it clear that, “The only mentality we carry is the one that always strives for victory,” showing his commitment to earn three points in order to clinch their spot into the knockout stage. 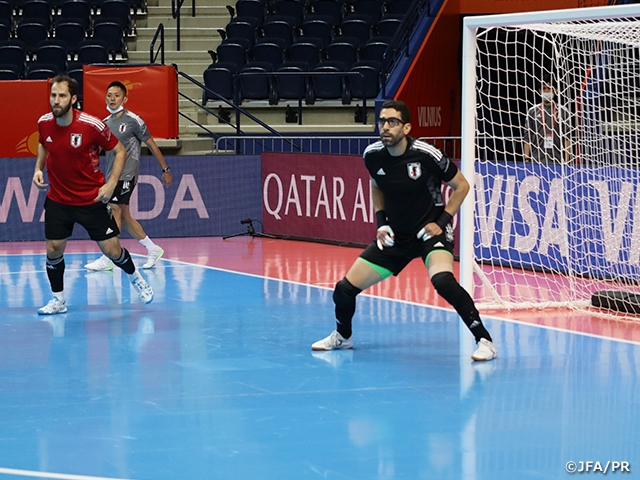 Before their training session, the team held a meeting to review the footages of Paraguay to analyse their game. Coach Garcia told his players that, “It's not about the video or the tactical board that matters. It’s about expressing what you understand in your head on the pitch.” When looking back on how they conceded the four goals to Spain, the coach mentioned, “We know the solutions to the errors that we made. Mistakes will always be made in futsal. The important thing is that everyone acknowledges the mistakes, find solutions quickly, and make the most of it to improve the team. We have done that over and over, and what we have accumulated over the years has become our strengths.” The team then made their way to Vilnius Arena, where they held a training for about an hour. 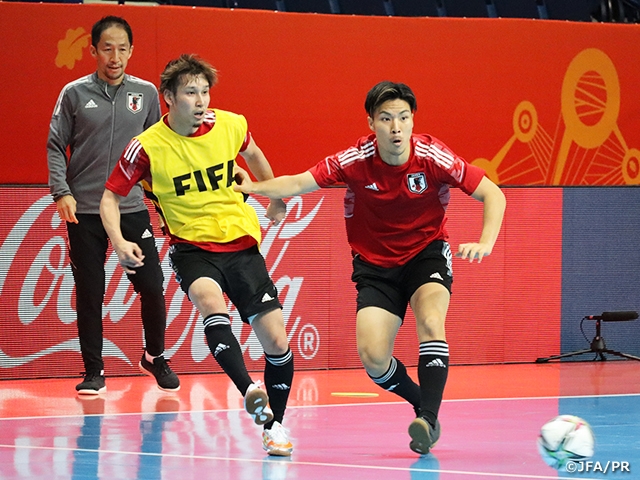 Bruno GARCIA, Coach
We are fully focused and motivated with a match that will certainly be a big game for us. We are in a situation where we can achieve our first goal of advancing through the group stage, so we are continuing to prepare for that goal. We will be facing Paraguay, a team that has participated in the last five World Cups in a row and is a powerhouse who is always in the top eight in the FIFA ranking. We have faced them in an international friendly match held in Sapporo in February 2020, so we are familiar with how they play. Through scouting, analysing, and researching, both sides will be fully prepared for tomorrow’s match. However, it will be us who prevails at the end, through our concentration and motivation to advance through the group stage. We are competing with the goal of winning every match. According to the rules of this tournament, even if we finish in third place of our group, we still have a chance of advancing through, depending on the results of other groups. However, we are mentally excluding such though process and we are full on to win over the opponent in front of us. Of course, depending on the development of the game, we must make a decision not to take risks in order to prioritise our goal of reaching the knockout stage. However, that is something we cannot predict or assume, and we need to enter the match with a mentally that we are playing to win the match, rather than controlling the match to earn a draw.