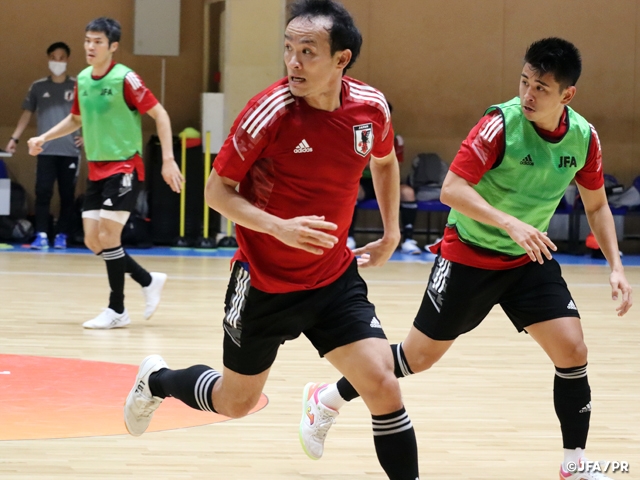 One day ahead of the opening day of the FIFA Futsal World Cup Lithuania 2021™, the Japan Futsal National Team held a team meeting and a training session on Saturday 11 September.

During the meeting where the team focused on their set-pieces, the players went over the patterns of their corner kicks and kick-ins. Set-pieces are an essential aspect of futsal, and each country has developed various patterns over the years. As much as it is important for a team to have a wide option, players must be able to repeatedly execute the play. Coach Bruno GARCIA used video feeds to explain the importance to be detailed oriented when executing a set-piece, from the order of the runs made, timing of the runs, distance between each player, whether the final shot is taken with the right foot or the left foot. The coach also demanded the players to make decisions based on live information, as he went around asking the players’ what they would do in certain situations shown in the video. 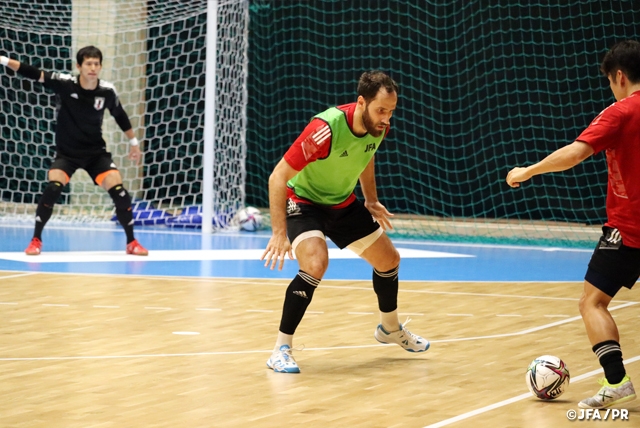 Ahead of the training session, coach Garcia told the players that “This will be the last training session where I demand you to play with high intensity.” With just three more days until their first match, this day’s training session was their last opportunity to raise their intensity level. After going through their usual warmup routine, the team went through drills that covered shooting and power-plays, before spending most of their time playing scrimmage games, in which the players showcased match-like intensity level. Even during break time, the players held discussions to go over their plays, as veteran field player HOSHI Shota mentioned, “Even if it is a trivial matter, it is important that we talk it out and resolve any feelings of discomfort that we may have.” 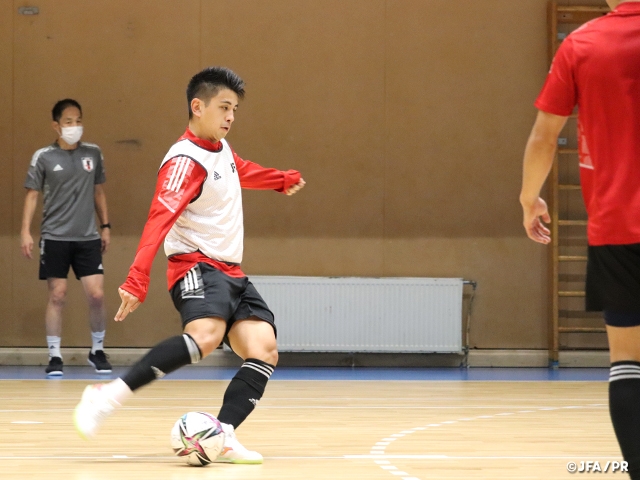 FP #5 MINAMOTO Akira (Tachikawa-Fuchu Athletic FC)
The World Cup is finally upon us. We would like to showcase everything we have accumulated over the past five years with coach Bruno and deliver a performance that can even excite people who has never seen futsal before. Personally, it took me a lot of time to reach the World Cup. It has been 13 years since I was first called up to the national team when I was 22. After overcoming serious injuries and many adversities, I am finally here. Through my performance, I would like to express my gratitude towards all the people who has believed and supported me. There are also many teammates who wish to be here but couldn’t make it. TAKITA Manabu and WATANABE Tomoaki are among those players who have supported the Japan National Team for a long time, so I will play on behalf of them once I step on the court of the World Cup.

FP #10 HENMI Katsutoshi Rafael (SL Benfica/Portugal)
The World Cup is finally kicking off and in line to play our first match against Angola in three days. We have great confidence. We are ready for all the difficulties that await us at the World Cup. We will do our best to fight every match, earn good results, and hope to bring back good news to the futsal fans in Japan.

FP #14 NISHITANI Ryosuke (Nagoya Oceans)
The World Cup will finally be held in Lithuania, after seeing it get postponed for a year due to the influence of the Covid-19 pandemic. The AFC qualifiers did not take place, and many domestic tournaments were also cancelled. That is why this World Cup is so significant, and that is why we will be playing with lots of expectations, hopes, and responsibilities. Losing the World Cup Asian qualifiers in Tashkent in 2016 and missing out on the World Cup was painful and tough. It was devastating. We felt like we let everyone down, brought disgrace to the history of Japanese futsal, and lost all confidence for ourselves. However, when we returned to Japan, there were friends who stood by, teammates who continued to work with us, and staffs that provided guidance and support. I was encouraged by the warm support of the fans and futsal family. Because of them, I was able to re-ignite my passion and regain my confidence. That is why I am truly thankful to all of the people who stood by us during the difficult times. Since I started playing futsal, the World Cup has always been my goal. It was a vague goal at the time, but now it is clear as a crystal. Our goal is to achieve the best result in the history of the Japan Futsal National Team. I think it is our turn to give energy, courage, and vitality to everyone. With the World Cup just around the corner, I am very excited, and ready to complete with the samurai spirit, while believing in my teammates.