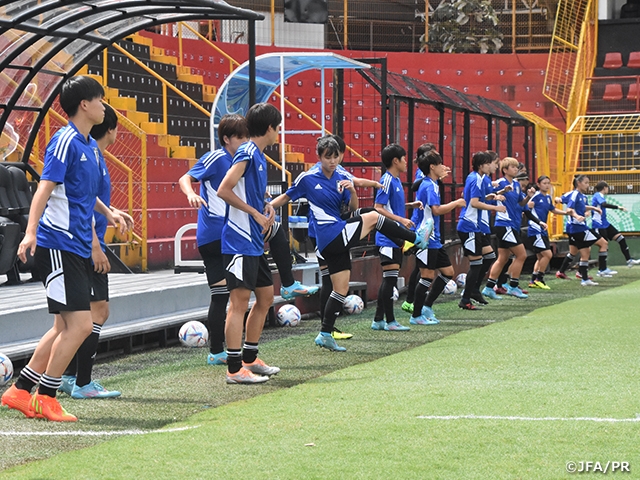 One day ahead of their first group stage match of the FIFA U-20 Women's World Cup Costa Rica 2022™, the U-20 Japan Women's National Team held their final training session on Wednesday 10 August.

On Monday 8, the team held a training session in the morning, where they conducted drills covering one-on-one offence and their defensive shape. The session lasted for about 90 minutes, as the team went through their tactics as well as their physical conditions to prepare for the first match. During the afternoon photo shoot held by the tournament officials, the players looked relaxed, as they struck poses requested by the camera crew, showing serious expressions and smiles in front of the camera.

On Tuesday 9, the team held an official training session at Estadio Alejandro Morera Soto, the match venue where they will face the U-20 Netherlands Women's National Team. In addition to their training, the players stepped onto the pitch for the first time to get a feel for the turf and the atmosphere of the stadium. In the evening, coach IKEDA Futoshi attended an official press conference, where he met with his fellow Group D coaches and shared his enthusiasm for the tournament. When asked about his impression of his team's first opponent, the Netherlands, he said, “They are a well organised team, who consist of individual players with great speed and creativity.” On the other hand, the Netherlands’ coach Jessica TORNY described Japan as “a team that pays attention to details” and said, “Like every other match, we will play our match against Japan as if we were playing in the final.”

On Wednesday 10, the team held a training session behind closed door, where they went through their tactics including their set-pieces. The players huddled up on the pitch after the training session, where coach Ikeda gave a pep-talk, saying, “The World Cup is a celebration of football, so let's enjoy our favourite game on this wonderful stage!” Also on this day, the opening match of the tournament took pace, as the competition to determine the world champions finally got under way. Japan will play their first group stage match against the U-20 Netherlands Women's National Team at 14:00 on Thursday 11 (5:00 on Friday 12, Japan time). The match will be broadcasted live on J SPORTS, and the recorded match will be aired on BS Fuji on Saturday 13 at 2:03. Please stay tuned for the young Nadeshiko's battle to claim back-to-back titles in the World Cup. 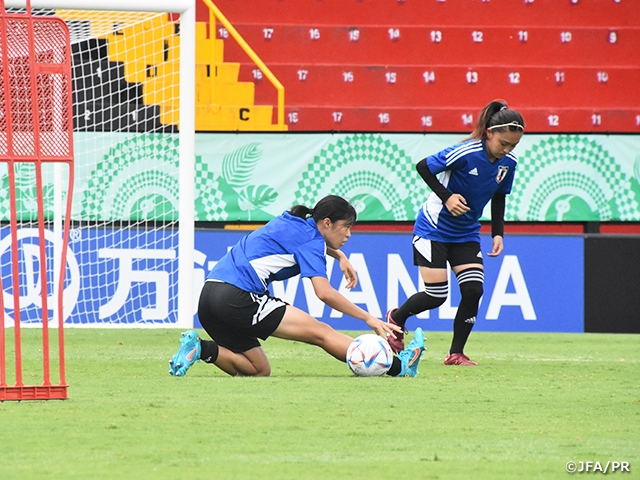 IKEDA Futoshi, Head Coach of U-20 Japan Women's National Team
The players worked through today's training knowing that they will have the chance to showcase what they have built up over the years at the World Cup tomorrow. I think the players will be able to enter tomorrow’s match with that mindset. We have come up with a lot of ideas and have been able to work with the players to make the most out of the domestic training camps, so we hope to improve ourselves through this tournament and try to show what we are capable of.

We don’t want to play passively when facing the Netherlands. We want to be the aggressor to showcase our strong points and make the necessary adjustments as the match progresses. I have also told my players to be brave and not to be afraid to make mistakes. Our opponents have players with great physical strength, as well as speedy and distinctive players up front. They are also capable of moving the ball with great organisation as their senior team. We'll be prepared for that and hope to bring out the best of our coordinated attacks. We can play the game with composure if we can anticipate what happens next, so we hope to play with confidence for the whole 90 minutes.

DF #3 NAGAE Ibuki (AC Nagano Parceiro Ladies)
We were able to conduct our final training session with a positive vibe. Some of the players, including myself, seemed to be nervous, but I think that can be said for our opponents as well. We know the importance of the first match, and it is not an overstatement to say that it can determine the whole outcome of this tournament, so we are fully determined to win the match. Regardless of how we play, we want to prioritise the result first. I feel that foreign teams play completely different from how we play in Japan, especially in terms of their long reach, physical ability, and their ability to take shots from long distance. I believe that our team's endurance and teamwork are second to none, so those are the areas in which we want to excel.

MF #15 AMANO Suzu (INAC Kobe Leonessa)
Personally, this will be my first World Cup since the 2020 FIFA U-17 Women's World Cup™ was cancelled. I'm very excited and I think we're well prepared in terms of staying on the same page as a team, both offensively and defensively. I am the type of player who gets a little nervous before the match but loosens up as soon as the match starts. I want to first remind myself of my capabilities, and then try to showcase a performance that can surprise the people watching. I will focus on supporting the forwards and try to get myself involved in our offence as much as possible.

FW #9 YAMAMOTO Yuzuki (Nippon TV Tokyo Verdy Beleza)
We have had a long time to prepare since arriving in Costa Rica, and we were able to build up a lot during that time, so we want to showcase what we have worked on, while also enjoying the moment. Through the long training camp, everyone has become more competitive, which is a good change for us. The official training session held at the stadium was a bit nerve-wracking, but I feel twice as excited as the match is about to start. It was good to get a feel for the turf conditions of the pitch and the scale of the stadium. Considering the fact that it is the first match of the tournament and the opponents we are scheduled to face later on, this match against the Netherlands might be the most important match of this group stage, so we want to win this match at all costs. We have never played against the Netherlands before, but we know that they are capable of attacking from the flanks, so we hope to prevent their attacks while making the most of our own strengths to score goals.