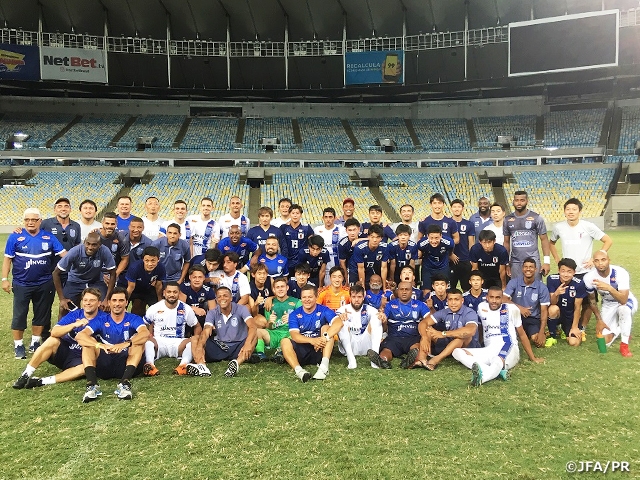 On Monday 17 December, the U-19 Japan National Team played their first match of their Brazil Tour, where they drew 1-1 against the local professional side, Goytacaz FC. With former Brazil National Team member ATHIRSON as their coach, Goytacaz FC currently plays in the Campeonato Carioca Second Division, and they are scheduled to play a match this weekend that could promote them to the Campeonato Carioca First Division. An arrangement was made by the former Japan National Team Coach ZICO, and the match was held at the Maracana Stadium, which is considered to be a sacred stadium for the Brazil National Team, most recently memorised as where they won the title at the 2016 Olympic Games in Rio de Janeiro.

The match started off with Japan taking the initiative, as the local side took a passive approach to test the water. Japan showcased their character by applying aggressive pressure to force turnovers and initiate their attacks. However, facing a professional team, Japan struggled to create a clear opportunity to take a shot. Conversely, an opportunity came towards Goytacaz in the 11th minute, when they broke through the right flank with a long ball. Following a cross delivered to the middle, a powerful shot was taken from distance, but the Japanese goalkeeper OSAKO Keisuke made a great effort to parry the ball away from the goal. Japan took control of the ball possession from then on and created many opportunities, especially from their side attacks. Defender NAKAMURA Takumi made numbers of runs down the line and sent in many crosses but came short from connecting with the attacking players upfront. In the 30th minute, GOKE Yuta forced a turnover deep in the opposing territory and combined well with KUBO Takefusa to carry the ball upfront before sending the last pass to TAGAWA Kyosuke, but the Goytacaz defenders did well to cover up this opportunity. A couple minutes later, SAITO Mitsuki broke through the right flank to send a cross, and HIRAKAWA Rei struck a shot from distance after collecting the loose ball, but his attempt couldn’t hit the target. While Japan create multiple opportunities in the first half, they finally grabbed the lead in the 36th minute, when Saito Mitsuki’s delivery from the left side induced an own-goal to give Japan the 1-0 lead at halftime.

With both teams changing the line-up dramatically in the second half, the match turned into a more physical battle. In the 55th minute, the Brazilian club side converted a set-piece to equalise the match. Japan responded by showing even quicker ball movements and tightened defence to deny the opponents from creating major opportunities. However, they struggled to create chances themselves, as they failed to finish their attacks with a shot. In the 66th minute, SAITO Koki responded to a through ball delivered by SUGAWARA Yukinari, but his attempt to cut the ball across was blocked by the opposing defender. While Goytacaz kept attacking with great aggression, the Japanese side did well to showcase their persistency and kept the score intact, as the match ended with a final score of 1-1.

The U-19 Japan National Team will now face U-20 Clube de Regatas do Flamengo on Wednesday 19 December (local time). 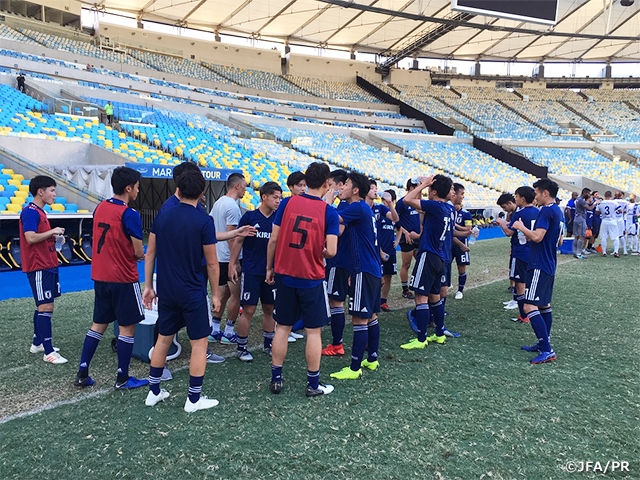 DF KOBAYASHI Yuki (Vissel Kobe U-18)
Following the UAE Tour with the U-21 Japan National Team in November, I had been craving to play under a high level, so I was very much looking forward to play in this Brazil Tour. I was given the opportunity to play in the first half today, and although I was able to hold the ball well, I still must improve on how to manage the risks in defence. We faced many counter attacks and seemingly created those risks by ourselves. However, the fact that we managed to deny the fierce attacks of our opponents in the closing minutes of the match gives us great confidence moving forward. During this tour, I hope to learn from the South American players on how they fight for the ball and their cunning techniques. Ahead of the FIFA U-20 World Cup, we must heighten the individual level while we build the cohesiveness as a team. We must all maintain a high intention so that we can build a strong team.

MF NAKAMURA Takumi (Higashi Fukuoka High School)
I am glad to be called up to the U-19 Japan National Team. In my previous callup with the U-18 Japan National Team’s Portugal Tour, I had so much fun competing against foreign players, so I was really looking forward for this callup. As expected, the level of the U-19 Japan National Team is very high, but through each training sessions, I feel like I am getting more and more used to the playing level. In today’s match, I made some mistakes at first because I was a little nervous, but I managed to play with composure after a while and created many opportunities from the flank. I still felt the need to improve the timing of my runs and be stronger at the fifty-fifty situations. During this tour, I am playing with many teammates who are competing at the J. League at a regular basis, so I hope to learn from them as much as possible. Of course, there will be many things to learn from the Brazilian players as well, so I will be stay keen to learn from the entire environment during this tour. Although we don’t have much time left ahead of the FIFA U-20 World Cup, I will give my very best so that I can be selected for the final squad for the World Cup.

MF KIDA Hinata (Cerezo Osaka U-18)
Even though I was called up to the team as a late substitute, I am glad to return to the U-19 Japan National Team. I was given the opportunity to play in many positions today. We took control of the ball and created many opportunities in the first half, but it’s regretful that we failed to score a goal. With our opponents bringing in many fresh players in the second half, we gave up an unnecessary foul that cost us the goal, so that was a bit disappointing as well. Our coaches have mentioned to us many times that set-pieces can decide these kinds of matches, so we should have done a better job defencing against them. This match gave us the opportunity to feel the world standard. I am deeply inspired by the quality of plays in today’s match and our daily training sessions. I really hope to absorb as much as possible from this tour. Especially because I missed out on the AFC U-19 Championship Indonesia 2018, I hope to gain as many experiences as possible and gain my spot in the World Cup again.

MF HIRAKAWA Rei (F.C. Tokyo)
We managed to keep possession of the ball and control the match in our favour, but we lacked creativity upfront to break through the final third. I personally felt the need to be more creative against teams with a defensive approach. We should have switched the sides more often and execute more plays that would irritate the opponents. I remember the bitterness of missing out on the AFC U-19 Championship Indonesia 2018. I hope to try out my potential against the Brazilian teams while absorbing as much as possible from the South American players. This is a very important tour ahead of the FIFA U-20 World Cup, so I hope to showcase my strengths and contribute to the team as much as possible.

*Local Time
*The schedule and match venue are subject to change due to the team condition, the weather, etc.