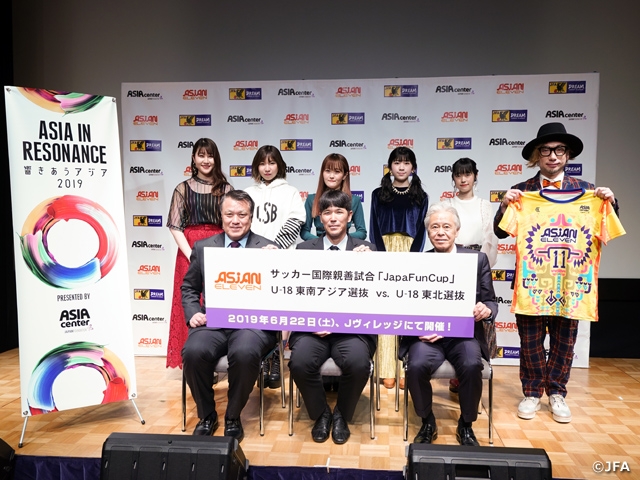 With the support of the Japan Foundation Asia Center, the Japan Football Association (JFA) since 2014 has launched and promoted an international football exchange programme that involves the countries of Southeast Asia. In June 2019, selected players from 11 countries of Southeast Asia will form the "ASIAN ELEVEN" to face the U-18 Tohoku Select Team, a team that consists of players selected from the Tohoku Region, in an international friendly match named "JapaFunCup" at J-Village in Fukushima Prefecture.

On Wednesday 12 March, the details of the match were announced at a press-conference held at the JFA House.

At the press-conference, President of the Japan Foundation ANDO Hiroyasu, JFA President TASHIMA Kohzo, coach KOGA Takuma who will be leading the ASIAN ELEVEN, and Art Director Sebastian Masuda who designed the jersey for the ASIAN ELEVEN, took the podium. 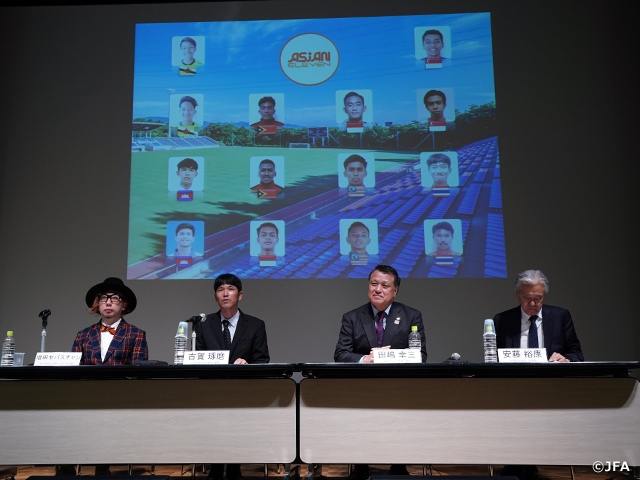 President of the Japan Foundation ANDO described the match, “It has been five years since launching the joint project in 2014, and we will conduct a series of events as a part of the ‘Asia in Resonance 2019.’ This match is one of the main events of the project.” JFA President TASHIMA revealed that the U-18 Tohoku Select Team will be led by the Tohoku Region Chief of the National Training Centre, TEGURAMORI Hiroshi, who was named as the Specially-Appointed Restoration Support Coach following the Great East Japan Earthquake and has the experience of coaching throughout the prefectures of the Tohoku Region. JFA President TASHIMA showed his enthusiasm when mentioning, “It’s an exciting matchup between two coaches who are deeply acquainted with the ASEAN and Tohoku Region. With the J-Village being the symbol of restoration, we want to revive the venue as a football facility.”

After coach KOGA introduced his team, the jersey of the ASIAN ELEVEN was revealed, followed by a performance given by the Little Glee Monster who sang the theme song of the match, "I BELIEVE," to conclude the press-conference with great excitement. 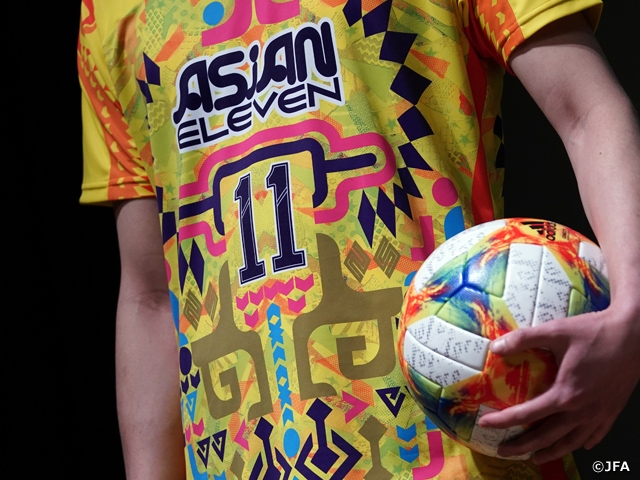 The "JapaFunCup" match between the ASIAN ELEVEN and the U-18 Tohoku Select Team will be held at J-Village on Saturday 22 June.

ANDO Hiroyasu, President of the Japan Foundation
It has been five years since lauching the joint project in 2014, and this year we will conduct a series of events as part of the “Asia in Resonance 2019” to recapitulate our past activities. As one of our main events, we are planning to host the international friendly match "JapaFunCup" this June. The match will be played between the “ASIAN ELEVEN,” a team of selected Southeast Asian youth players, against the U-18 Tohoku Select Team of Japan. The event will be a joint project with the JFA, and the match is scheduled to take place on Saturday 22 June at J-Village in Fukushima Prefecture. In 2014, the JFA, the J. League, and the Japan Foundation Asia Center entered into a tripartite agreement to launch an international football exchange programme between Japan and Southeast Asia. Ever since, a total of 166 instructors have been dispatched to countries in Southeast Asia, while 3,150 players from Southeast Asia have been invited to Japan. This time, the JapaFunCup will be held at J-Village in Fukushima Prefecture. It has been eight years since the Great East Japan Earthquake, and we are grateful to be able to conduct this event at the symbol of restoration. This was only made possible with the tireless efforts given by everyone involved. We hope to give great joy to the people of Fukushima and everyone in Tohoku through this JapaFunCup.

TASHIMA Kohzo, JFA President
In order for the Japanese football and Asian football to reach the world standards, we must heighten the competition within the continent. The JFA strongly believes that we must nurture more rivalries within Asia. As a part of our activities to support the development of football in Asia, the JFA has been dispatching instructors to many regions of Asia. We currently have 14 instructors working at 10 different nations. In the recent years, ASEAN has seen dramatic advancements in its economy and the level of football has seen a proportionate growth during the same time span. With the population exceeding the EU with nearly 650,000,000 people, along with the high popularity of football, the ASEAN has drawn the attention from FIFA, and many nations are starting to devote their efforts to develop the youth in the recent years. Countries like Vietnam, Thailand, and Republic of the Philippines have achieved positive results at the AFC Asian Cup. In this upcoming event, talented players will be selected throughout the ASEAN countries. The team facing them will be the U-18 Tohoku Select Team led by Mr. TEGURAMORI Hiroshi, who has been supporting the Tohoku Region following the earthquake as the JFA Specially-Appointed Restoration Support Coach. It’s an exciting matchup between two coaches who are deeply acquainted with the ASEAN and Tohoku Region. The match will take place at J-Village, a venue that took a new start last November and scheduled to resume full-operation from 20th of April. As you may know, ever since the earthquake, the venue had been utilised as the base of the reconstruction efforts. Now the venue will resume its operation as a football facility, and we are hoping to revive J-Village as the Mecca for the Japanese football community. We are also hoping to deepen the international interaction between Japan and ASEAN through sports. At this event, we would like the participating players to strive for greatness at the newly renovated J-Village and nurture friendship with players from different nations.

KOGA Takuma, Coach of ASIAN ELEVEN
After playing in the J. League, I have coached youth teams at three different Southeast Asian nations, Singapore, Democratic Republic of Timor-Leste, and Myanmar. This year I am appointed as the coach of the U-15 Myanmar National Team. The most surprising aspect when working in Southeast Asia is the amount of passion the people have towards football. According to a study, football is the most popular sport in most Southeast Asian nations. I have also been able to feel the dramatic growth of economy and population in first hand. Through the project carried out by the Asia Center and the JFA, we hope to make improvements in coach development and produce numbers of talented players that are capable of playing in Japan in the future. The players selected into the ASIAN ELEVEN are highly regarded young prospects of Southeast Asia and their future success is greatly anticipated. Football is a wonderful sport where players with variety of personality and character can excel. Top-tier players from 11 nations of Southeast Asia will be gathered and we hope to showcase a great level of diversity at the match. I strongly believe that this match will allow the Japanese football fans to take a preview of what to come in the next five or ten years, as many of the Southeast Asian nations will become strong rivals for Japan. Through the activities of the ASIAN ELEVEN, we hope to introduce the future of Southeast Asian football, their magnetism, and the diversity to the people of Japan. We also hope that this event will serve as a platform to develop the relationship between Japan and the Southeast Asian nations further.

Sebastian Masuda, Art Director
I have served as a volunteer in the ASEAN countries 10 years ago. I have heard that the ASEAN countries have developed dramatically over the last 10 years. After so many years has gone by, I am grateful to be given the opportunity to get myself involved with the Asian nations and contribute in a different form. The jersey was designed with the inspiration I felt when I visited Thailand during the Asian Cup earlier this year, where the crowd was surrounded with an enormous amount of enthusiasm. The design represents “Unity beyond borders.” I came up with the design while visualising ways to make the players from ASEAN shine beautifully and powerfully under the scorching sun. I am very excited to see the players excel at the world stage wearing these jerseys.