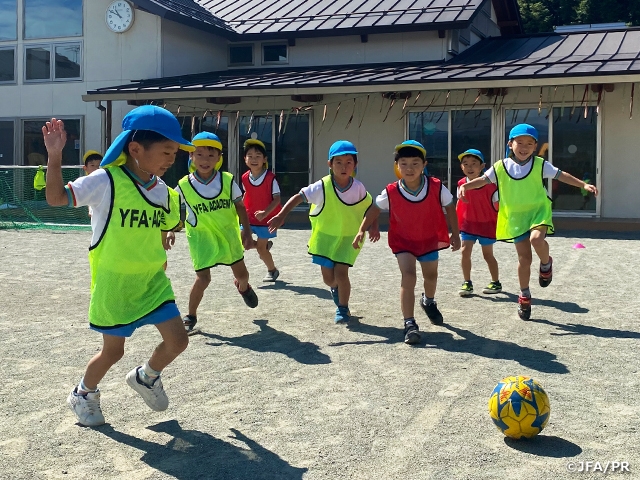 With the support of the Kids committees of each prefectural football association (FA), JFA has been holding “Traveling guidance” courses throughout the nation. The courses are held by the “Traveling guidance staffs” of each prefectural FA, where the staffs attend kindergartens, nurseries, and primary schools to provide various programmes for children to enjoy football. Joined by guidance staffs who specialise in coaching football, teachers who may not have the experience or knowledge to instruct football, are enabled to hold sessions to allow the children to exercise using the ball. Here we will introduce the traveling guidance activities that were recently conducted.

On the day of the event, 33 children of the five year old class were divided into two groups for the football class. I was very impressed with the way the children ran around the yard during the preparation exercise. Since this nursery school has implemented football in their daily activities, we focused on playing scrimmages. The children actively challenged to win the ball and dribbled around when we played four vs four. In addition, the two female leaders actively communicated with the children, which made for a very fulfilling football class with. We will continue to work together with the female leaders to create more opportunities for children to play football. 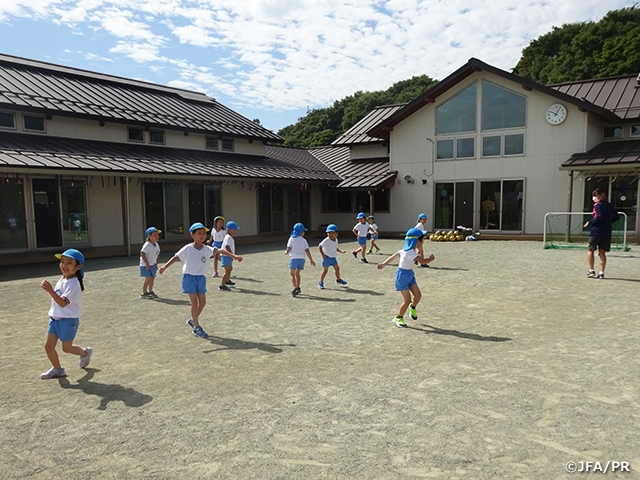 KAJINO Yuta (FA Traveling Guidance Staff)
The children looked nervous when they first gathered in the school yard, but once the football class started, they were actively involved in the activities. I was very impressed with the way everyone tried to touch the ball, and how they got up and ran even after falling down during the scrimmage game.

MURAO Honoka (FA Traveling Guidance Staff)
There were children who were very disappointed after losing the game, and it was impressive to see them not only having fun but also taking the competition seriously. I was also very happy to see that not only the children playing, but also the children watching around them were enjoying the game of football.

SASAKI Ryoka (FA Traveling Guidance Staff)
By implementing humour to our activities, the children were able to enjoy participating in the activities until the end. It was good to see that even the children who had difficulties listening to the coaches in the previous classes, listened and took the class seriously.

Mr. KANEKO & Ms. ITO, Teacher
I was impressed by the children’s expressions as they chased after the ball during the game and the joy they shared with their friends when they scored a goal. When the ball is at their feet, the children tend to kick the ball away, but with the instructions of the coaches, they started to dribble the ball and chase the ball to keep the ball in bound, as a result, the children were able to enjoy soccer more. Thank you very much.

Ms. OBI & Ms. KAMATA, Teacher
The course was mainly focused on playing scrimmages, the children were able to enjoy the class because the rules were communicated in an easy-to-understand manner. They also listened to the coach's advice and made strategies to win with their teammates, which was something we have not seen in the previous classes. Thank you for the fun time. 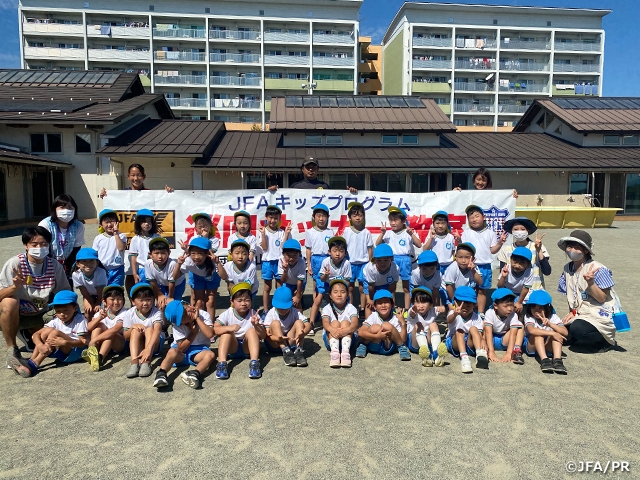