The SAMURAI BLUE was originally scheduled to face the Jamaica National Team in the KIRIN CHALLENGE CUP 2021, but the match was cancelled after part of the Jamaican squad were not able to arrive in Japan on time.

In this rare occasion where two Japan National Teams squared off against each other, the SAMURAI BLUE appeared on the pitch wearing specially designed jerseys which commemorated JFA’s 100th anniversary. Following their match against the Myanmar National Team on 28 May, where they clinched their spot into the final round of the Asian qualifiers for the FIFA World Cup Qatar 2022™, players belonging to the J.League has joined the team, while players selected into the U-24 Japan National Team left the squad, including the three players selected as the “Over-age (OA)” players, YOSHIDA Maya (U.C. Sampdoria), SAKAI Hiroki (Olympique de Marseille), and ENDO Wataru (VfB Stuttgart).

With a new look to his squad, coach MORIYASU Hajime made slight changes to the starting line-up, as TANIGUCHI Shogo (Kawasaki Frontale) and UEDA Naomichi (Nimes Olympique) were named as the centre halves, while MUROYA Sei (Hannover 96) started as the right fullback. In the midfield, HASHIMOTO Kento (FC Rostov) and MORITA Hidemasa (CD Santa Clara) were placed as the defensive midfielders, while HARAGUCHI Genki (Hannover 96) started as the attacking midfielder on the left.

The match started with the SAMURAI BLUE taking advantage of their superiority in match experience against the U-24 Japan National Team, who elected not to start the OA players. The opening goal came in the second minute, when OSAKO Yuya (Werder Bremen) responded to a corner-kick delivered by KAMADA Daichi (Eintracht Frankfurt), and flicked the ball towards the far side, allowing Hashimoto to redirect the ball into the net. 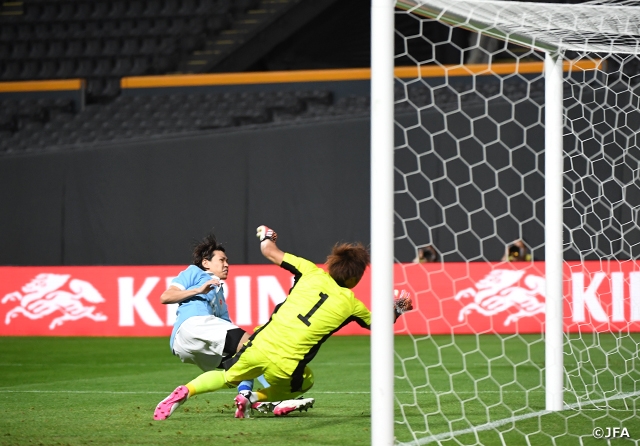 After conceding the lead in the early minutes, the U-24 Japan National Team started to increase their intensity level and created opportunities to threaten the opposing goal. In the 20th minute, TAGAWA Kyosuke (FC Tokyo) utilised his speed to break through, but his final shot went just wide of the goal. ITAKURA Kou (FC Groningen) also made an attempt from the edge of the box in the 25th minute, but his shot was blocked by NAGATOMO Yuto (Olympique de Marseille).

While maintaining their composure in defence, the SAMURAI BLUE gradually picked up their pace in offence. With Morita repeatedly utilising the long ball to switch sides, MINAMINO Takumi (Southampton FC) and Haraguchi penetrated the flanks to create opportunities. In the 41st minute, Minamino responded to a lobbing pass delivered by Hashimoto and headed the ball down to Kamada who superbly controlled the ball before slotting it into the right corner of the goal. 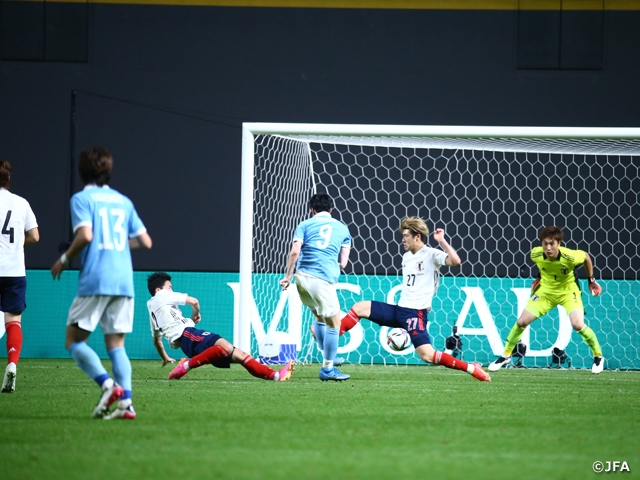 Entering halftime with a 2-0 lead, the senior side made five changes, as NAKAMURA Kosuke (Portimonense S.C.), OGAWA Ryoya (FC Tokyo), FURUHASHI Kyogo (Vissel Kobe), ASANO Takuma (FA), and ITO Junya (KRC Genk) were introduced to the match. In the 52nd minute, Ogawa broke down the left flank before sending a cross towards Asano, who made a sliding effort to touch the ball. Although his initial attempt was blocked by the opposing goalkeeper, Asano quickly got up and converted the deflection into the net.

Two more substitutions were made in the 62nd minute, as KAWABE Hayao (Sanfrecce Hiroshima) and SAKAMOTO Tatsuhiro (Cerezo Osaka) entered the match. For Sakamoto, this was his first cap with the Japan National Team. SHOJI Gen (Gamba Osaka) followed in the 70th minute, making his first national team appearance in nearly two years.

Facing the solid defence of the senior side, the U-24 Japan National Team struggled to create opportunities, but the tide started to shift their way after Endo entered the match in the 78th minute. With the OA player orchestrating the offence, SUGAWARA Yukinari (AZ Alkmaar) penetrated the right flank before sending a sharp cross into the mix, but no one was able to capitalise on this opportunity.

With time running out, the U-24 Japan National Team made their final push to score a goal, as HAYASHI Daichi (Sagan Tosu) received the ball inside the box and struck a shot, but his attempt was comfortably parried away by NAKAMURA Kosuke (Portimonense S.C.). Another opportunity came Hayashi’s way, when he connected with a CK during additional time, but this time his shot sailed over the cross bar, giving the SAMURAI BLUE a 3-0 shutout victory.

Prior to kick-off, a round of applause was given to the medical workers who are working on the frontline to combat the pandemic. In addition, a fundraiser was held during the match, as the money collected through the online crowdfund system “KASSAI” will be donated to Hokkaido and Sapporo city to support their medical activities. 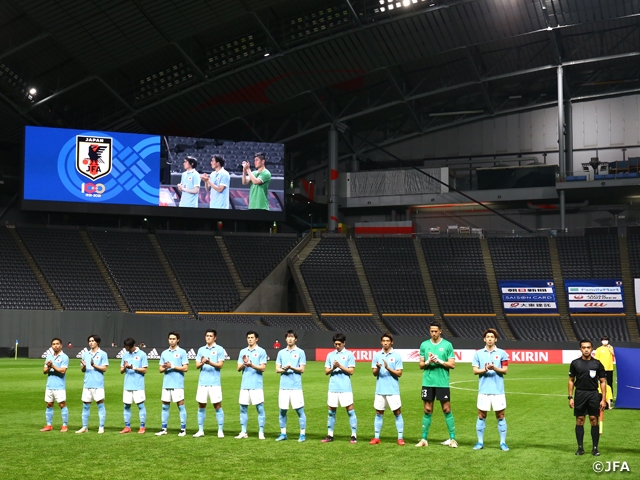 The SAMURAI BLUE is now scheduled to face the Tajikistan National Team at Osaka on Monday 7 July.

MORIYASU Hajime, Coach of SAMURAI BLUE (Japan National Team)
This match could have gone differently if the U-24 Japan National Team utilised their OA players from the start. Our players played with great intensity, and although they seemed to be overwhelmed at the beginning, the players of the U-24 side also showcased a strong performance today. Both sides fought hard and played to win the match, which made this an intense match until the final whistle. In terms of defence, the senior side showcased a very solid game. Although we had only one day to go over our defence, the players understood the team’s concept, played with great intensity, and covered for each other to showcase a collective effort. I feel that the players are doing their best under the given circumstance.

Many of the players on the U-24 Japan National Team have become regular members for the senior side, so I am aware of those players, but through this match, I was able to get a firm grip on what the other players can provide for the team. This was a great opportunity to see if the players can showcase their usual performance under high pressure. We have not spent much time on defence, and it was evident that the players were not on the same page today. All and all, I was not satisfied with the performance given by the U-24 side. In order to achieve our goal of winning a medal at the Olympics, they must be able to showcase a better performance under pressure. I hope the players will make the most of this experience and work even hard to make changes during this training camp.

In September 2018, our match at the KIRIN CHALLENGE CUP 2018 was cancelled due to the effects of Hokkaido Eastern Iburi Earthquake, so this match meant a lot for us. We entered the match with the intention to give back to the people of Hokkaido who supported us in 2018 and deliver energy and courage to those who are fighting against the pandemic.

MF #7 MORITA Hidemasa (CD Santa Clara)
It was a unique situation to face another team representing our country, but I feel like we were able to showcase our pride and strengths as the senior team. We knew that the U-24 side had many talented players, so we were not expecting to take control of the match for the entire 90 minutes. However, by entering the match with high intensity, we were able to catch the U-24 players off-guard and score the opening goal. We were confident that we had the advantage in terms of intensity level and transitions, so I feel like this match went according to our plan.

MF #13 HASHIMOTO Kento (FC Rostov)
We entered the match with the intention to get off to a good start, so it was great that we were able to score the opening goal in the early minutes. We all knew this was a match we couldn’t afford to lose, so the players were fully motivated for this match. I am considering each match as my last chance, so I am glad I was able to contribute to the team’s goals, but I must improve myself so that I can stay on the pitch for the entire 90 minutes. I feel like I was able to communicate well with Morita and make adjustments according to the game flow. Although there were times where we allowed our opponent to take control of the match, we still managed to communicate with each other and stay on the same page. It was great that we were able to win this match while keeping a clean sheet. Hopefully, it will give us momentum towards our next match at the World Cup qualifiers.

MF #9 KAMADA Daichi (Eintracht Frankfurt)
In the scene where I scored the goal, Minamino redirected the ball perfectly and I was able to control the ball well. I wasn’t able to get a firm contact with the ball, but I am glad it went in. It felt like my body just reacted to the situation. It was very difficult facing the U-24 Japan National Team. Our players were fully motivated for this match, and I had to turn my switch on after I was stripped with the ball in the early minutes. I though both sides played with great intensity and showcased a good performance. We still have matches left in the second round of the Asian qualifiers, so must focus, and try to win each match by showcasing a strong performance.

FW #15 OSAKO Yuya (Werder Bremen)
When we scored the opening goal, I was able to head the ball unmarked, so it went just as I intended, and Hashimoto made a great run to convert that opportunity. I really wanted to face the OA players, so that was a bit unfortunate. I think they can become a much better team with the OA players. We are expecting the competition to intensify at the final round of the Asian qualifiers, so we must focus on executing our game plan under high pressure. Minamino, Haraguchi, and Kamada were making great runs today, which made my job a lot easier. Although I was named as the team captain, everybody did their jobs, so I was able to just focus on my own plays.