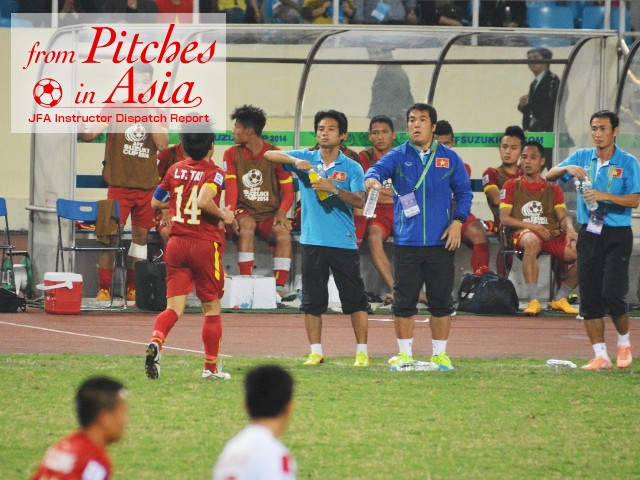 The Japan Football Association has dispatched a great number of instructors to many countries and regions in Asia since 1999. They serve as a head coach of national teams, a development coach, a referee instructor or other roles in the assigned area to contribute to nurture and development of local teams, players and referees. Starting from this month, we report the direct voice of instructors who do their work with the slogan “Development of Asian Football” in various environments in Asia.

In fall 2014, Vietnam National Team claimed the final four of the AFF SUZUKI CUP 2014, the tournament to determine ASEAN’s best countries, for the first time in two years. Two Japanese coaches took an important role in the team’s breakthrough. The Vol.1 of the report series was written by the team’s athletic trainer Fujimoto Hiroo, who accompanied Vietnam National Team alongside its head coach Miura Toshiya.

My three months spell that I accompanied Vietnam National Team as the trainer was very stimulating and fruitful. One of the big roles was to support the team for the “SUZUKI CUP,” which determines the champions of the ASEAN. I always thought about what’s the best way to communicate with players and coaches in terms of differences in culture and ways of thinking between two countries.

The biggest part I struggled with and learned was importance of communication. I had conversations with a Vietnamese doctor and a physio in a smattering of English and Vietnamese. Because we used clumsy English, sometimes it didn’t get through. But we had many conversations supported by an interpreter and head coach Miura so that I could manage to carry out my job. We had an approach to respect culture and ways of thinking that we have, to offer our way of thinking and to actually carry it out. After that, we talked with each other and listened to their way of thinking and feedback. It’s important to repeat discussions until we settled on the best solution. At first, what I wanted to say didn’t get through, but eventually players and coaches understood and worked hard on that.

What I Left in Vietnam

Injury diagnosis and assessment were not different from Japanese ones, but Vietnamese weren’t actively working on injury prevention and rehabilitation. That’s the biggest difference in trainer’s work between Japan and Vietnam. In Japan, when a player is sidelined by injury and works on separated training, the trainer makes a workout plan for the player not to get injured again until his or her comeback. Yet in Vietnam, once a player feels less pain, he or she suddenly makes a comeback through player’s own decision. To avoid that, we medical staff had meetings to share the condition of players. As a result, players no longer make a comeback with her or his own feeling.

I believe I was able to leave “injury prevention” as my legacy in the team by accompanying Vietnam National Team. We provided only players who just came back from injury at first with exercises to increase the temperature of muscle for five to ten minutes before warm-up, but other players who got interested in them came to join, and eventually we did it in the whole team after I discussed with Miura. I hope players continue to work out for the injury protection on their own motive and will lessen their injury.

Head coach Miura Toshiya has got high reputation for his work. He put up good results in the friendly before the SUZUKI CUP and at the Asian Games. His team got through the group stage of the SUZUKI CUP atop and won Game 1 of the semi-final. They were beaten in Game 2 and eliminated from the semi-final, but the credibility of players, staff and the Vietnam Football Federation on Miura has not been shaken. They have high expectation on his managing ability in the development of Vietnam National Team for the Olympic Qualifiers and the SEA Games (East Asian Olympics). 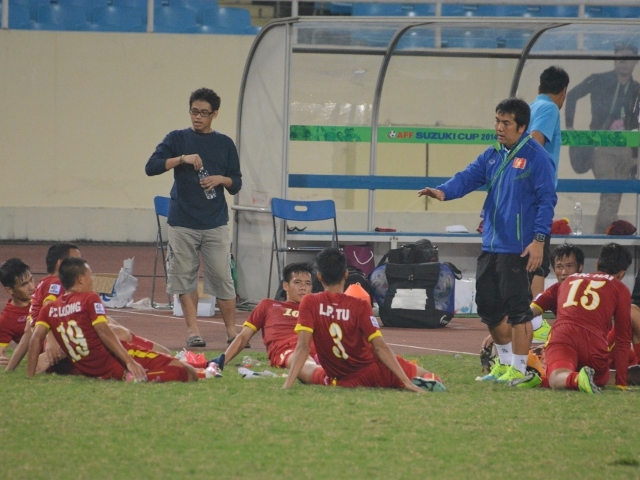 Athletic Trainer Certified by the Japan Sports Association
He accompanies various categories of Japan’s national teams as well as works at JFA Academy Fukushima. He also has an acupuncturist certification and completed the FIFA’s football injury protection programme.

The Vol.2 report will be coming out in early February.